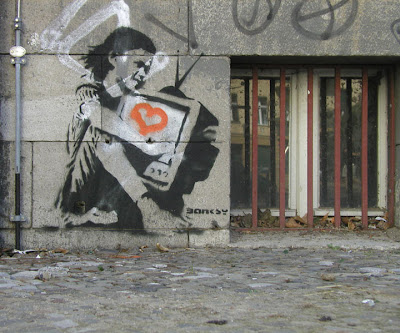 A portrait of me courtesy of Banksy

Valentine's Day is the time of year that our thoughts turn once again to love, romance and relationships. However, romance is a very common theme in Christmas stories as well. In fact, Christmas movies so frequently use The Hook-Up as a storyline if it isn't the the primary plot, Romance will most certainly will be the B or C story. I'm speaking of the popular Christmas TV movies that we all watch on the Hallmark Channel, Lifetime, and ABC Family. But the tradition of romantic Christmas movies isn't new. The classic Hollywood studios also produced romantic Christmas movies many of which we still watch on Turner Classic Movies or on DVD.

Below is a list of my top five favorite classic Hollywood romantic Christmas movies some of which I've written about before. In no particular order: 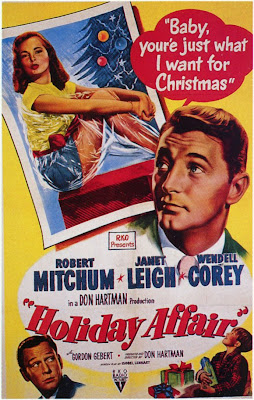 Holiday Affair (1949)
This romance story stars the hunk Robert Mitchum as Steve Mason and actress Janet Leigh as Connie. Connie works as a comparison shopper who gets Steve, a toy store employee, fired from his job at Christmas time. Her young son Timmy keeps urging his mother to befriend Steve and she indulges him because of her guilt. This film was re-made for television in 1996 starring David James Elliott and Cynthia Gibb however it lacks the charisma of the original film's casting. 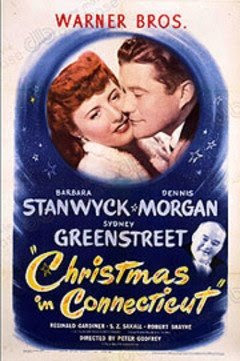 Christmas in Connecticut (1945)
This romantic comedy is one of my all-time favorite Christmas movies. I absolutely adore Barbara Stanwyck. Stanwyck plays Elizabeth Lane, a magazine writer about domestic skills (think 1940s Martha Stewart) who is asked to entertain a war hero over the Christmas holiday. Unfortunately, Elizabeth is a woman of words--not an actual domestic goddess--and she has to cover up her lack of cooking and hostessing skills while trying to impress the good-looking war hero. This movie too was re-made for television, starring Dyan Cannon in the Stanwyck role in 1992. 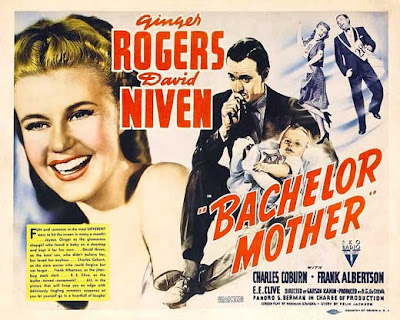 Bachelor Mother (1939)
Another romantic comedy, this sassy story features a wise-cracking Ginger Rogers and actor David Niven. Rogers plays Polly Parrish a department store clerk, who is mistaken for the mother of an orphaned baby. After a series of misunderstandings and assumptions, she is forced into keeping the baby and claiming it as her own. When she catches the eye of the young wealthy owner of the store, played by David Niven, she has a hard time keeping her secret about being a single woman with a baby! Turner Classic Movies also broadcasts the 1956 musical remake of this film entitled Bundle of Joy which stars Debbie Reynold and Eddie Fisher. However, I still prefer the original. 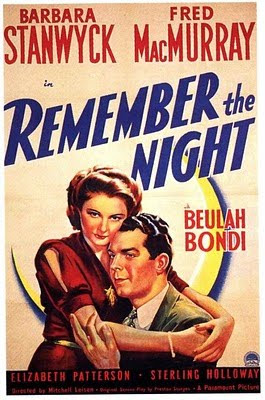 Remember the Night (1940)
Another Barbara Stanwyck vehicle, this film also stars Fred MacMurray. He plays a district attorney with a soft heart who releases a female accused convict (Stanwyck) from jail over the Christmas holiday. He doesn't realize she has nowhere to stay during the holiday. When he finds out she will be homeless, he feels an obligation to look after her until her court date after Christmas. So the tough-talking Bad Girl finds herself accompanying the lawyer to his family home in the Midwest to spend Christmas with a traditional, loving family. This film's story is sweet and tender in all the right places. 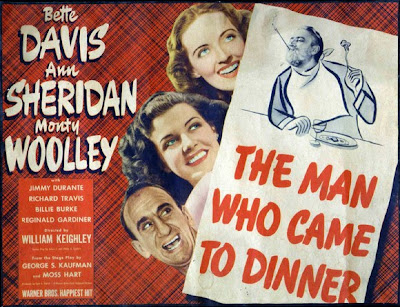 The Man Who Came to Dinner (1942)
This film is based on the successful Broadway play written by George S. Kaufman and Moss Hart. Click here to see what I've blogged about it before. The romance in this chaotic comedy is between characters played by Bette Davis and Richard Travis. This film is a rare comedic role for Davis, and she really shines. The Man Who Came to Dinner has been re-made for television several times most recently for PBS in 2000.

Email ThisBlogThis!Share to TwitterShare to FacebookShare to Pinterest
Labels: Bachelor Mother, Christmas in Connecticut, Holiday Affair, Remember the Night, The Man Who Came to Dinner