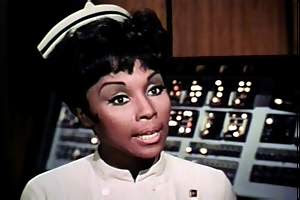 The TV series Julia starring Diahann Carroll ran for three seasons (1968-71) and broke racial barriers. This sitcom marks one of the first times a black female character was able to be the lead and titular character of her own show. The only previous example is the TV sitcom Beulah, which ran on TV from 1950-52. However, this black female character was reduced to playing a racially stereotypical role and a maid in a white household. In Julia, Diahann Carroll plays a widowed single mother raising her young son and working as a nurse. This pleasant sitcom includes a 1968 Christmas episode entitled "I'm Dreaming of a Black Christmas." 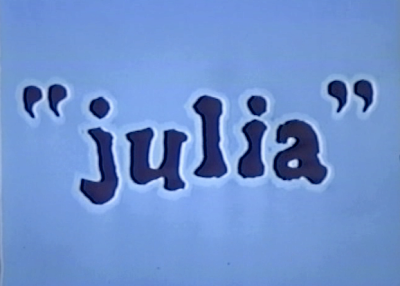 Julia's son, Corey, and his best friend, Earl J. Waggedorn, argue over whether Santa Claus is a white or black man. Julia takes her son to the tree lot but all the salesman has left on Christmas Eve is a twisted, bent Christmas tree that won’t stand up. That night, we see their friends independently arranging to have three separate black Santa Clauses come to the apartment to visit Corey. The babysitter’s Santa Claus gets lost in the shuffle but the Waggedorn’s Santa Claus pleases Corey as does Dr. Chegley’s Santa--who is actually Julia’s uncle that Chegley has flown in from Kansas.

The highlight of this outstanding holiday episode is hearing Diahann Carroll as Julia singing Christmas carols to her son including ‘Santa Claus is Coming to Town,’ ‘Have Yourself a Merry Little Christmas,’ ‘We Wish You a Merry Christmas’ and ‘Jingle Bells.’

Wait for the heartwarming scene where Earl J. Waggedorn emerges from his bedroom to see his parents with a black Santa Claus, finally realizing Corey has been right all along.

Entertainer Diahann Carroll has appeared in many TV shows over the years since Julia. Perhaps most memorably she played Dominique Devereaux, the disgruntled sister to Blake Carrington on the primetime soap, Dynasty, as well as Whitley Gilbert's mother on the spin-off sitcom A Different World. However, she also appeared on the 1978 two-hour fiasco, The Star Wars Holiday Special as a titulating musical entertainer on the elder wookie Itchy's Mind Evaporator virtual reality viewing device. If you've seen it, you haven't forgotten this weird scene. 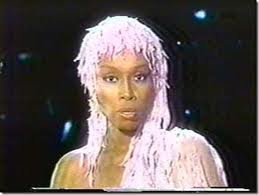 from the 1978 Star Wars Holiday Special
Diahann Carroll has had a long and rich career. But I've focused on Julia's Christmas episode to celebrate Black History Month because of the show's special place in TV history and because it features Diahann Carroll at her best.
Posted by Joanna at 3:26 PM