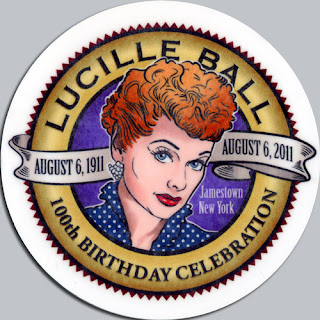 This weekend has been an amazing celebration honoring the First Lady of TV Comedy's 100th birthday.  There are acknowledgements of Lucille Ball's legacy all over the internet and events scheduled in Los Angeles and her hometown in Jamestown, NY.  Did you see my previous post about my visit to Jamestown this week?  Click here to see that.

Since this is the place to discuss Christmas TV memories, perhaps there's no better time to remember Lucille Ball's contributions to Christmas entertainment.  Have you ever seen the 1974 movie Mame? 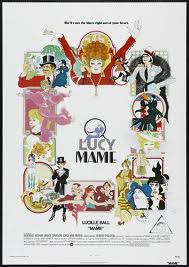 A lush film adaptation of the Broadway hit show about the free-spirited life of Mame Dennis and her influence on her young nephew Patrick.  Lucille Ball plays the lead role of Mame.  Unlike the previous film version, 1958’s ‘Auntie Mame’ starring Rosalind Russell, this musical version by Jerry Herman includes the holiday song “We Need a Little Christmas” originally made famous by Angela Lansbury on Broadway.

Though this is not usually considered a holiday film per se, it does contain a significant Christmas scene:  suffering under hard economic times during the Depression, Mame, Patrick and her household staff decide to celebrate Christmas one month early in order to cheer themselves up. Thus the lyrics of the now popular song “We Need a Little Christmas.”  This scene includes the characters singing and dancing while decorating child caretaker Agnes Gooch as a Christmas tree!


The entire movie is available on DVD.

When I visited the Desilu Playhouse museum in Jamestown, I was able to see several costumes Ball wore while making this movie.  On display were the black top hat and riding crop she wore in the fox hunting scenes as well as the gorgeous red drop-waisted gown and the wig she wore in the scene pictured below.

Of course, Lucille Ball also appeared in the Christmas episode of I Love Lucy: 1956's "Christmas Show."  In this episode, the Ricardos and the Mertzes decorate the Christmas tree together and reminisce about the highlights of their lives, seen in flashback clips from previous episodes.  These clips include: Lucy’s pregnancy announcement, Little Ricky’s birth, and a clip of Lucy singing off-key during a barbershop quartet performance.  On Christmas morning, Lucy, Ricky, Ethel and Fred are all dressed as Santa to surprise Little Ricky--but who’s the fifth Santa in the room with them? 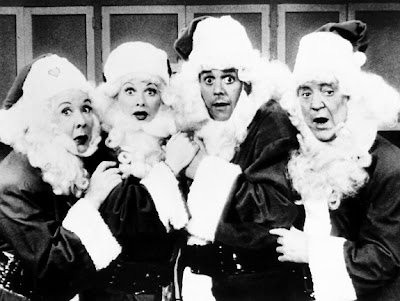 This episode was not broadcast after 1956 having been left out of the syndication package of episodes sold by Desi and Lucy of their show to be aired as reruns.  It was not seen again until 1989 when CBS re-aired the episode--after 33 long years.  It was left out of the original syndication package because it was a clip show, deemed too insignificant, and the Christmas elements too untimely for broadcast all year long.

Previously in 1951, and again in 1952, a short segment, now informally referred to as “Jingle Bells” was tacked on to the end of the Christmas Eve broadcasts of I Love Lucy.  This "Jingle Bells" segment shows the the Mertzes and the Ricardos in Santa suits singing “Jingle Bells” in the Ricardo apartment once again surprised by a fifth Santa in the room.  This short segment was clearly the inspiration for the ending in the full length clip show episode in 1956.

The original Santa suit that Lucille Ball wore for the 1956 Christmas episode is currently on display at the Desilu Playhouse museum, on loan from a private collector.

The 1974 movie Mame is available for viewing on DVD and at Netflix as is the 1956 Christmas episode of I Love Lucy.  "Christmas Show" is located on the second disc of the sixth season DVD set.

Lucille Ball also appeared in three holiday episodes on The Lucy Show: 1962's "Together For Christmas" followed by 1962's "Chris' New Year's Eve Party" and 1965's "Lucy the Choirmaster." All three are available for viewing on DVD.