People ask me all the time about my appearance on the History Channel.  If you've heard about it before, pardon me for telling the story one more time.  It all started as a series of emails, followed by a flurry of phone calls.  Before I knew it, I was flown to Los Angeles, California.  My part in the documentary was being filmed during April (2010) for the TV special to be released in time for the holiday season. 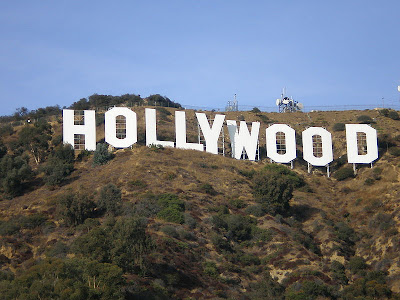 I remember I wore my Grinch t-shirt on the plane so the production assistant could more easily identify me from the other passengers at LAX.  And, I had him take me through the In-n-Out Burger drive-thru before he even dropped me off at the hotel.  (Yeah, I'm a huge Big Lebowski movie fan and they don't have In-n-Out Burger fast food restaurants in the Midwest).  My on-camera interview was to take place the following day.

My filmed interview took place in the morning so I took my time ordering a leisurely room service breakfast and looking over the notes and research I had prepared in order to discuss some twenty plus Christmas specials and movies.  They had a make-up professional on site to apply the required layer of 'beauty' on my face before I went on camera.  After make-up, I was taken into a room, seated in front of a green screen, hooked up to a microphone and my interview began.  It felt like I spoke non-stop all day (if you know me, you know I can go on and on talking for hours about Christmas on TV).  I believe I spoke for more than an hour about everything from The Star Wars Holiday Special to A Charlie Brown Christmas.  I remember being asked about the animated Grinch special, Mister Magoo's Christmas Carol, the legendary Bing Crosby/David Bowie duet and three or four of the Rankin/Bass animated favorites.

When it was over, I was brain dead.  For the rest of the day, I had Christmas TV moments pop into my mind and I felt frustrated for not mentioning better, more nostalgic or favorite scenes during my brief time in front of the camera.  That kind of second guessing myself feeling follows every interview I do.  I'm very grateful to the wonderful professional people at Workaholic Productions who included me in the TV special and made my interview an easy going experience. 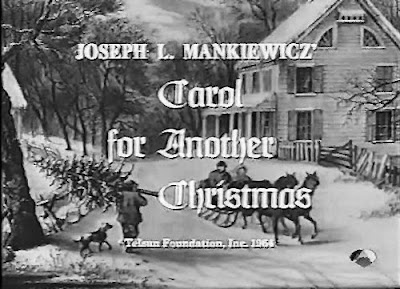 I had the rest of the day to spend in Los Angeles so I took full advantage of my opportunities.  My first stop was to the UCLA campus to the visit the Film and Television Archive.  I had an appointment to view a very rare TV movie: 1964's Carol for Another Christmas, written by Rod Serling.  Until that moment, I had only read about this movie, usually discussed only amongst academics, but I really wanted to see it for myself.  I'm glad I did too.  Although it aired only once, it is an amazing slice of Cold war culture.  It certainly should be seen by every Rod Serling fan. 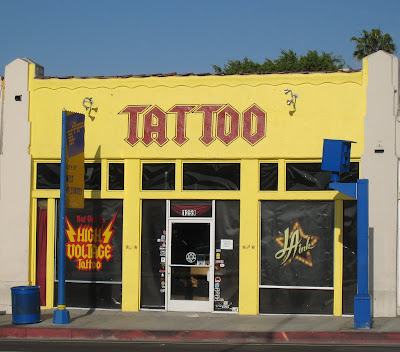 After that, I did what every other TV junkie does--I headed over to West Hollywood to get more ink at High Voltage Tattoo, the shop owned by Kat Von D and the subject of the TV series LA Ink which airs on TLC.  On the day I was there last April, the TV crew was there in the shop shooting an episode for the show's fourth season.  Kat was giving her friend Rooftop a tattoo on his lower back.  I was just a walk-in client.  The episode aired last fall but I'm not on camera.  The following day with my arm bandaged up, I flew back to Ohio to await the release of the holiday TV special on the History Channel. 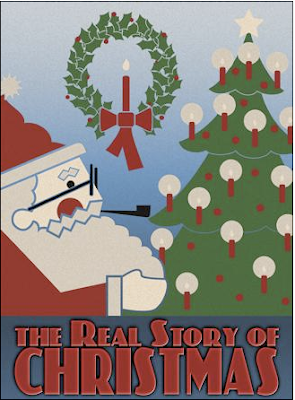 Finally in December, the History Channel debuted their new documentary entitled The Real Story of Christmas.  I think it turned out fantastic.  Trust me, I've seen ALL the Christmas TV documentaries and this is a good one.  For all the talking I did, I only ended up in about four seconds worth of camera time.  Since I sound fairly intelligent during my millisecond of fame, I'm extremely happy with the results.  Shucks, I'm grateful to be included at all.

If you didn't watch The Real Story of Christmas last holiday season, I expect it to re-air this November and December.  In the mean time, you could watch it on Youtube.  It's in my playlist of TV specials I've appeared in on my channel: TistheSeasonTV.  If you just want to see my brief moment of brilliance, you can see me in the clip below at about the one minute point.


Do you recognize the sweater I'm wearing?  It's the exact same as the one I wore on Teen Focus.  Opps! I guess I need to expand my wardrobe.
Posted by Joanna at 12:02 PM

Email ThisBlogThis!Share to TwitterShare to FacebookShare to Pinterest
Labels: The Real Story of Chrismas