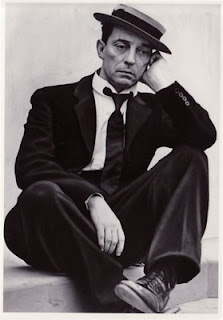 Silent film star, actor/director Buster Keaton isn't known for slapstick comedy as much as his brilliant physical feats and deadpan humor.  I think I've seen The General more times than any of his other films.  Steamboat Bill Jr. is the film with the famous scene where the wall of a building falls over him and he escapes injury because he's standing in the precise spot to clear a second-story window.

In Sherlock Jr. one can see the now legendary scene where he is pushed to the ground by a gush of water spilling from an overhead water tank.  This scene is legendary because it has been revealed to be the shot where the actor actually broke his neck when he fell onto the railroad tracks due to the weight of the water.

Keaton had a revival in the late 1950-early 1960s.  He appeared in several comedy films and worked in television.  He even had a role in three of the American International Pictures beach movies in the 1960s with Annette Funicello and Frankie Avalon.  One of the aforementioned TV appearances that he made was a 1958 Christmas episode of The Donna Reed Show. 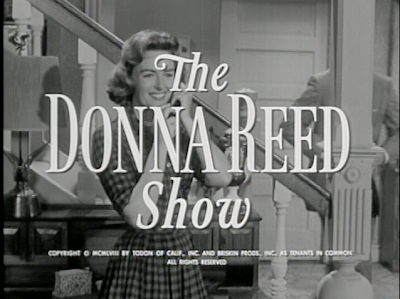 The first season episode entitled "A Very Merry Christmas" sees the Stone family matriarch frustrated with herself and others this holiday.  She notices her children Jeff and Mary are both keeping score on the cost and number of gifts they have received from their friends.  Donna is also hurt by the paperboy, mailman and delivery man's unappreciative responses to her holiday gifts of fruitcake.  When she learns that the hospital (where her husband Alex works) has left the work of organizing the children's ward Christmas party all to Charlie the janitor, she gets involved.  Here, Charlie the good-hearted janitor is played by Buster Keaton.

While Buster Keaton doesn't have much of an opportunity to show off much of his physical comedy, he does have a significant amount of screen time and dialogue.  (He does comically walk into a door--so there is one small moment of physical humor!)  If you didn't already know who Keaton was, you may not even know from this episode that you're watching a comic legend.  But for those of us who recognize Keaton, this special Christmas episode offers a nostalgic reminder of the happy hours spent watching his films.

In the final scene at the Christmas party, Charlie, now wearing a Santa suit, is emotionally touched by the little bit of happiness he's brought to the children spending their holiday in the hospital.  As his (and our's) eyes fill with tears, we can see that sad, little funny man again tilting his head with that stoic face just as he did so many times in our favorite silent films.


This episode is available for viewing on the first season DVD set of The Donna Reed Show.  It is also available in the collection of holiday comedy episodes called Merry Sitcom!