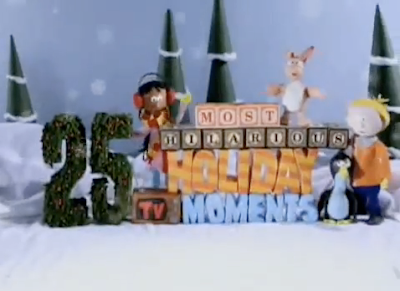 We've all seen these countdown shows.  They usually include video clips and sassy commentators.  I was lucky enough to be asked to be one of those talking heads on a program created for the TV Guide Network which aired last holiday season.


I was flown to New York City for the taping of the TV special in October 2010.  I arrived at the studio space in the early morning, even before much of the crew came in, although my time before the camera wasn't until later in the afternoon.  I spent most of the day watching several other participants being interviewed, providing their commentary for the camera, before my turn in the chair.  It was an interesting lesson to watch how these shows are created and produced. 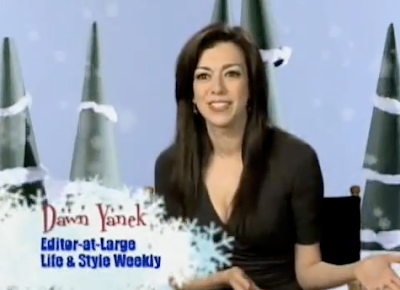 One of the other women, Dawn Yanek, was very efficient and professional at her interview.  I marveled at her ease speaking before the camera.  I spoke to her briefly after her interview and she was very pleasant to me.  Several months later while watching Law & Order: SVU,  I saw her in the episode's opening--Dawn played a woman in the story who found the dead body! (It's a 2009 episode entitled 'Baggage').  I'm very jealous!

After a long day of waiting for my time in front of the camera, I finally had my chance.  Much like my History Channel interview,  I spent more than an hour talking about my favorite moments from these 25 hilarious holiday clips.  After all the editing and compiling of all the participants, I have quite a bit of face time in this TV special.  I am very pleased with the results even if I think I need to smile more.  Just a few short years ago, I never would have imagined I would be discussing Pee-Wee's Playhouse Christmas Special, Larry the Cable Guy's Christmas Special, Family Ties, weird holiday public service announcements from CBS, The O.C., Family Guy and naming the members of KISS on a national TV Christmas special!

25 Most Hilarious Holiday TV Moments debuted in December 2010 when I was traveling on book tour promoting my two books.  The Sunday night it premiered, I happened to be in Indianapolis, IN awaiting a book signing scheduled the following day.  My hotel didn't get the TV Guide Network in their cable package in the rooms--don't EVEN get me started about how bad and limited the TV channel options are in hotel rooms!  Anyhoo, I spoke to the concierge in the hotel I was staying at, asking for a recommendation for a nearby sports bar or the like that would have TVs to watch for patrons.  She was the most awesome concierge ever because she spent the WHOLE day on the phone calling around to bars, restaurants and other hotels trying to find a business that would allow me to come over and watch myself on TV.  Frustrated, I had to wait another two weeks until I returned home to see how the show turned out.


But I didn't have much trouble finding when the special aired because they repeated it often, sometimes several times a day--through January 2011.  Hahahaha.  There were times I was flipping through the channels and freakishly heard my own voice before I knew it was airing again.  I am hoping that this popularity means that 25 Most Hilarious Holiday TV Moments will air again at holiday time 2011.  I've got my fingers crossed!  I hope you like it too.  An edited version that highlights my appearances in the special is available for viewing on my channel TistheSeasonTV on Youtube.  Or, you can watch it below.


an edited piece that highlights my participation

If you missed my previous discussions, here are the following links to my other TV appearances:  The Real Story of Christmas on the History Channel and Teen Focus on Cleveland, OH cable access television.  If there is a casting agent for any of the Law & Order franchises reading this, I want you to know that I am available to appear in any upcoming episodes to discover a dead body on the street.  Please contact me immediately.
Posted by Joanna at 11:18 PM