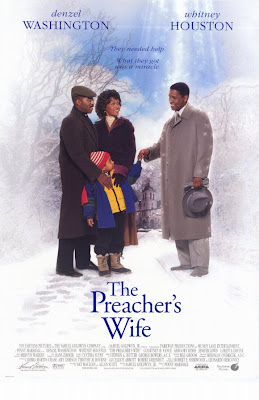 Before her personal life became fodder for the tabloids and the rumors of drug abuse and alcoholism were common knowledge, pop music’s Whitney Houston starred in a Christmas movie that features a stunning gospel music soundtrack.  The theatrical release movie The Preacher’s Wife is a remake of the 1947 Christmas movie The Bishop’s Wife which starred Cary Grant, Loretta Young and David Niven.  The 1996 remake starring Denzel Washington, Whitney Houston and Courtney B. Vance, an African-American update, takes place within an urban city center and a church community thus the soundtrack reflects a more gospel, spiritual sound.


The film’s story centers on the Reverend Henry Biggs, played by Vance, and his wife Julia, played by Houston, during a time of hardship in their marriage and their church.  Though it is Christmas time, Henry is tempted by the generous offer of a real estate developer Joe Hamilton, played by actor Gregory Hines, to sell out his congregation for a new church building.  Enter the charming Denzel Washington, playing an angel named Dudley, who is an answer to a prayer to guide Reverend Henry and help the strained relationship between him and his wife.  Church choir singing and music fill this story line because Julia works as St. Matthew’s choir director and she is organizing the church's Nativity pageant. 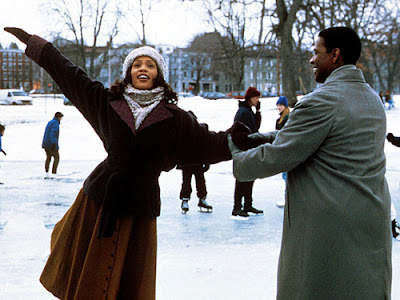 A favorite scene from this movie is when Dudley and Julia are ice skating together and the two characters share a bit of Hollywood chemistry on the screen.  Did you know Whitney’s mother, Cissy Houston makes an appearance in this movie? She plays Mrs. Havergal in the church choir.

This re-make of the black-and-white movie classic is made extra special by the inclusion of gospel music performances by chart-topping musical artist, Whitney Houston.  She not only sings several gospel songs with the church’s choir including the holiday favorite ‘Joy to the World’ but she also performs in a scene in Jazzie’s nightclub singing ‘I Believe in You and Me.’  In the movie, this is sung to the piano accompaniment of recording artist Lionel Richie.  Of course, Houston also sings several songs that appear on the movie’s soundtrack that play under various scenes in the story.

By now we have all heard the sad news of Whiteny Houston's tragic and untimely death.  She leaves behind a rich legacy of music and performances.  She will surely be missed.
Posted by Joanna at 10:35 AM