Happy Groundhog Day!!  On February 2nd, my mind connects less with the holiday's namesake, Punxsutaweny Phil, and more with the 1993 movie Groundhog Day starring Bill Murray and Andie MacDowell.  But then, I'm more of a film girl than a person who cares about weather predictions.  Besides, Groundhog Day is a modern classic--yes, I said it!  Everyone I know has seen that movie a million times and can quote their favorite lines ("Watch out for that first step. It's a doozy"--Ned Ryerson).

Actress Amy Smart plays Kate who finds herself reliving Christmas Eve over and over as she learns about love and the role fate plays in her life.  Though Kate has plans to marry Jack, she has to spend repeated Christmas Eve nights trying to let go of her ex-boyfriend as he prepares to marry someone else.  Kate also has to learn new approaches to romance and love as she experiences the same blind date with Miles (Mark-Paul Gosselaar) over and over until she figures out that she can’t change fate.  As Kate repeats the same day, she begins to help everyone with whom she crosses paths with to improve their romantic lives as well.  Miraculously, on the twelfth night, Kate throws a Christmas party for all her new friends she’s shared her day with.  Will Kate get what she wants for the holiday--the chance to wake up on Christmas morning?

A light-hearted comedy, this TV movie has several fun elements.  Kate’s Christmas Eve repeats each day as she awakens from passing out, on the floor next to the cosmetic counter after being sprayed with perfume at the department store.  This film also includes twelve visual cues to the popular carol The Twelve Days of Christmas--can you spot the partridge in the pear tree? how about the Lords a-leaping?

This film also includes an exceptional soundtrack for a TV movie.  Two favorite songs include “I Hope That It Snows” by Madi Diaz featuring Keegin DeWitt and Michael Bublé’s “Cold December Night” which plays under the closing credits.  Bublé's song is included on his 2011 "Christmas" album, the second best-selling album of 2011, selling nearly 2.5 million copies, according to a recent LA Times article.


Did you watch this ABC Family Channel movie last December?  Are you a fan of 1993's Groundhog Day?  What's your favorite Bill Murray movie?

How about a giveaway?  I have a brand new, factory-sealed DVD of the 2006 Christmas TV movie Christmas Do-Over starring Jay Mohr and Daphne Zuniga--which is an adaptation of Groundhog Day!  The first of my readers to comment below and ask for it can have it.  To qualify, I only ask that you follow my blog by GFC (Google Friend Connect) along the right hand side of this blog.  If you already follow this blog--then you're already qualified.  Make sure there is an email address so I can contact you if you win.  Thanks for being a loyal reader.  Happy Groundhog Day!! 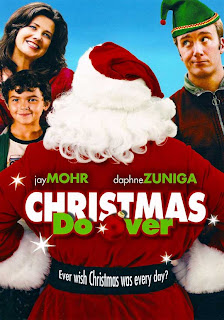