I'm continuing my month-long series of blog posts, Countdown to Halloween, discussing Halloween appropriate and Christmas crossover entertainments.  Have you explored the other blogs involved in the Countdown to Halloween?  Click HERE to go to the list of blogs also participating in Halloween posts. This month I've posted about Bewitched, the movie Bell, Book and Candle and The Ghost & Mrs. Muir.  Now I'm ready to move on to horror films set at Christmas time. 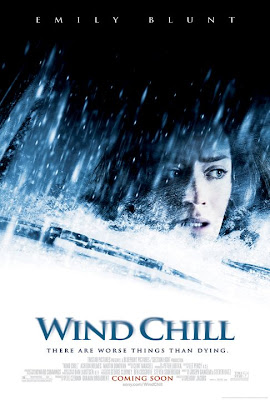 One of the better horror and suspense films set at Christmas of the past five years is 2007's Wind Chill.  This theatrical release movie is directed by Gregory Jacobs and stars Emily Blunt and Ashton Holmes as the Girl and the Guy.  A female college student shares what was meant to be a six-hour car ride from upstate New York to Delaware with a stranger to go home over Christmas break.


The two students get to know each other on the long drive home.  She's difficult and selfish while he seems boyish and cute but not that trustworthy.  After he takes a scenic detour onto a snow-covered  road through the mountains, they eventually find themselves pushed off the icy road and stranded inside the car as a winter storm intensifies. Periodically throughout the movie, the screen reveals the hours and minutes of a clock as viewers keep track of how much time is passing for the guy and the girl trapped in the cold.  Could they be stuck there overnight?  Will they get frost bite or even die in the frozen car as more and more snow piles on top?


Making things worse, they find they are isolated on a stretch of road with a horrifying history of deadly car accidents and ghost encounters. Though the car windows are fogged up, the girl thinks she sees people walking up the road, but they disappear into the woods before she can call out to them.  The guy follows someone into the woods where he discovers the remains of a house the contents of which only raises more questions.  The guy and the girl are very suspicious of one another inside the car, neither trusting the other until the real threat to their lives seems to come from outside the vehicle.

However, the highway patrolman isn't there to offer help.  Eventually even a tow truck driver arrives and offers to drive them to a nearby gas station and restaurant.  But the guy and the girl can't seem to escape the supernatural forces, perhaps even a time loop, keeping them on that road.  Could the supernatural characters and forces the girl experiences be explained by her head injury and losing consciousness in the initial accident?  Is she hallucinating as she freezes to death?


I've seen this movie twice and I like it more and more.  There is great attention to detail.  The look of the movie has been manipulated with heightened blues and blacks adding a very chilling effect, both literally and figuratively. Look at the photos above--the images all have a blue tint.  The majority of the movie takes place at night and in the snow.  It's a very effective use of color to create the look of the cold temperatures.  The film is also shot using mostly extreme close-ups--these are two people trapped in a car and it feels claustrophobic!  The clever storytelling incorporates reasons for the gal and guy to distrust each other. They are trapped and viewers can FEEL how painful it must be to not be able to escape from the small, tight, uncomfortable space.  When they step outside into the freezing night, they encounter people who offer them no comfort--potentially the people passing by may even harm them.  So the guy and the girl are forced to retreat into the confined, closed space of the cold vehicle that is much like a coffin.


Another detail in this movie is the Christmas music that plays on the radio in the car.  At first the holiday music is used to set the scene--it's Christmas time and the guy and the girl are going home to join their families for holiday break.  But later, a bouncy excited version of Gene Autry's "Here Comes Santa Claus" plays against the paranoia that the girl feels for the guy as she learns that they aren't strangers after all.  She discovers that he planned on luring her to let him drive her to Delaware.  Eventually, the innocuous Christmas standard "Rockin' Around the Christmas Tree" by Brenda Lee plays on the radio previous to each encounter with a supernatural, creepy person who approaches the car--despite the engine being turned off!  The juxtaposition of the familiar happy Christmas music with the feeling of impending doom is very effective and another great detail.


Though there's a supernatural explanation for the unusual experiences happening to the guy and the girl on this isolated road, I'm not sure you have to believe it.  That's one of the strengths of this story.  There is more than one explanation for these unusual occurrences.   The final shot is of the girl with  her cell phone (which had no reception in the mountains overnight) and looking at a photo she took of the guy, as if she doesn't know anymore what is real and what isn't real.  She seems to be asking herself, was HE even real?  I love open-ended movies.  What's scariest to me is usually something left to my own imagination--not what someone else defines.   Do you ever fear freezing to death?

Check out the original trailer.  Have you seen Wind Chill yet?