Book Review: A Christmas Story: Behind the Scenes of a Holiday Classic by Caseen Gaines 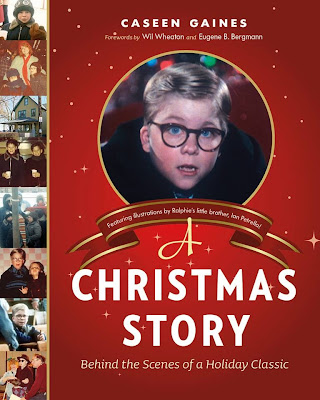 Even though it's Labor Day weekend, I'm already in the Christmas spirit.  That's because I've received an advanced copy of a new book by pop culture enthusiast Caseen Gaines entitled A Christmas Story: Behind the Scenes of a Holiday Classic.  The book which is scheduled to be released on October 1st, 2013, is the hottest item on everyone's Christmas list.  It is being released to coincide with the 30th anniversary of the movie's debut.  That's what I call perfect timing!

Gaines' book is everything it should be--and it covers everything it should cover.  Within its ten chapters, you'll read about the behind the scenes activities of what it took for the film's director Bob Clark to bring this production to theater screens.  Gaines recounts the film's screenplay, casting, shooting the film, its initial release and critics' reactions, and the movie's eventual climb to cult status.  There are also in depth discussions of Brian Jones' efforts to develop what has become Christmas movie fans' ultimate vacation destination: The Christmas Story House and Museum in Cleveland, Ohio--the house used for the exterior shots in the movie.  You'll also read about the Schwartzes, a couple who are such die-hard A Christmas Story fans that they made an indie film about their efforts to track down the original Canadian shooting locations and the original costumes worn in the film by the principle cast.  Gaines' book also details the explosion of merchandise retailed after the 20th anniversary of the film, as well as the multiple follow-up movies and staged productions inspired by the success of the 1983 film.

The photos in the book include movie publicity stills as well as some from the personal collection of Ian Petrella who played the little brother Randy.   Petrella's photos are a wonderful addition as they consist of candid, behind-the-scenes images of the cast and crew captured during the 1983 film's shoot.

Most of you may be pleased to learn that this new book includes a level of detail for even the most ardent A Christmas Story movie fans.  Even if you've seen the movie dozens of times--even hundreds of times--you'll learn something new.  Loyal fans of radio personality, raconteur, and short story writer Jean Shepherd will be satisfied to discover how much Gaines' book attributes to Shepherd's work, his influence on the success of the film, and Shep's ongoing legacy.  I recommend this book to anyone who knows the joy of watching A Christmas Story.  This is the Red Ryder BB Gun of books you'll want on your Christmas list this year.

In addition to all the wonderful details about this classic Christmas movie, I was pleased to see wider discussions, asking the questions--has this holiday cultural force jumped the shark? will viewers and fans ever lose their enthusiasm and will the film diminish in popularity?  I also appreciate Gaines reiterating the question--what makes A Christmas Story the cultural touchstone that it is?  From my perspective, I share Gaines' assertion that the movie continues to endure because it is rooted in the ritual of families coming together every year watching the movie marathon 24 Hours of A Christmas Story on cable TV or on DVD.  This ritual for many has become tradition--the essence of Christmas itself.  Can we imagine a Christmas in our futures without watching A Christmas Story on television?  Not in my lifetime!