Christmas With the King Family (1967) 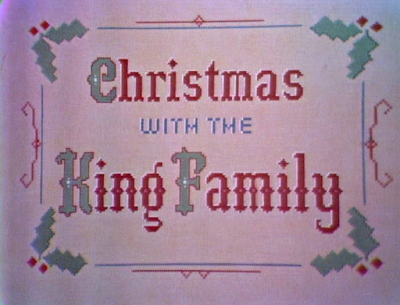 They just don’t make wholesome TV variety shows like Christmas with The King Family anymore!  Watching this 1967 TV special is like looking into a window onto the past when variety shows on TV were at their zenith and wholesome even corny sentimentalism was so popular, it was expected.  For those of us who still love this sort of thing, we're lucky that this entire 1967 TV special was released on DVD in 2009--a bonus feature on the Christmas with The King Family documentary that also aired on PBS.  The documentary is a collection of clips from several King Family Christmas TV programs with commentary by members of the King family.  Have you seen it?


1967's Christmas with The King Family was the first Christmas TV special following The King Family Show variety TV series.  Though "America’s First Family of Song" began their variety series on TV in 1965, this 1967 special is their first hour-long Christmas special.  The cast includes the King Sisters, Alvino Rey, the King Cousins, the King Kiddies as well as all the other aunts, uncles, brothers, sisters, nieces and nephews that make up the extended musical family. This Christmas special was rebroadcast by the network for many years until the King Family made their next Christmas TV special in 1974. 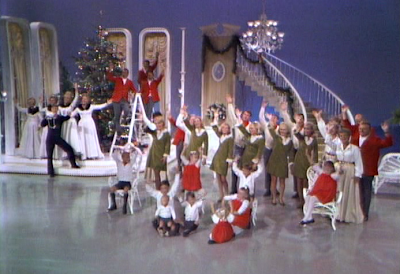 The family opens the show singing "Happy Holidays" and "Caroling, Caroling" as they decorate a Christmas tree on an open stage setting with a staircase, a chandelier and a couch.  The music continues with the King Cousins, the King Kiddies and the King Sisters singing a medley of "Deck the Halls/Jingle Bells" in an arrangement that features each group of singers.


In gorgeous floor-length white dresses with black fur collars, the King Sisters harmonize on "The Holiday of Love."  This song is one of the signature King Sisters holiday songs recorded for the King Family Christmas albums.


Tina Cole sings "I’ve Got My Love to Keep Me Warm" to her baby son, while young Cam and Laurette, and King Sister Marilyn and husband Kent, continue the same song.


Alvino Rey plays the steel guitar with two King cousins accompanying him on harp and stringed bass.  My favorite performance is the King Cousins dressed in red pajamas singing and dancing to a hip bossa-nova arrangement of "Twas the Night Before Christmas/Santa Claus is Coming to Town."  This is followed by King Sister Alyce singing "I’ll Be Home for Christmas" at the piano, played by son Lex.  Lex continues on the piano, performing a relaxed arrangement of "Sleigh Ride."


Bob Clarke recites a story about a Christmas donkey to the group of children intercut with animated images of Mary and Joseph on a donkey.

The whole family sings "Hear the Sledges With the Bells" and Marilyn sings "My Favorite Things."


The King Kiddies perform a dramatization of the Nativity story against a recording of the King Sisters singing "The Little Drummer Boy."

The King Sisters sing the beloved holiday classic "White Christmas" dressed in luxurious white hooded coats trimmed with white fur.  This is followed by the female members of the King Cousins singing "The Christmas Song" eventually joined by their mothers.

Most people remember  this particular TV special because it includes the surprise moment when King Sister Alyce has an unexpected and tearful reunion with her son Ric, who is brought on stage in the middle of her tender performance of the song "I’ll Be Home for Christmas."  Ric who was away serving in the military at that time surprises his mother who had dedicated her performance to him just moments before.


What I love about this classic TV special is its old-fashioned goodness and simplicity.  Even if I wasn't around to watch it in its original run on TV, I enjoy watching it now as a way to capture that feeling we all love to feel at Christmas--a longing for the good ol' days and warm times spent with the family.


Even if you've never heard of The King Sisters, and their large extended family, you may be interested to know of the King family's further influence on pop culture.  Guitar virtuoso Alvino Rey--husband to King Sister Luise--was a pioneer with the pedal steel guitar.  I still hear people evoke his name when discussing exotica music, a style of music Rey embraced later in his career.   Two of Alvino's grandsons Will and Win Butler continue in the music industry--in a hugely successful band, Arcade Fire.  It's a small world, isn't it?


You may also recognize King Sister Alyce's husband, actor Bob Clarke--who has appeared in several classic science fiction movies.  Clarke was also a regular in the 1960s color episodes of Dragnet (my favorite!)  King Kiddie Cam Clarke has since grown up to become a very successful voice actor in animation and video games.


And, King Cousin Tina Cole also worked as an actress.  She's appearing at The Hollywood Show in Chicago on Sept. 6th-8th, 2013 in a mini-cast reunion for My Three Sons along with former cast members Barry Livingston and Stanley Livingston.  I hope to see everyone in Chicago--I'll be there signing books.  Be sure to drop by my booth and say 'hi.'
Posted by Joanna at 2:18 PM