Christmas TV Party 2014: Mitchell Hadley at It's About TV! 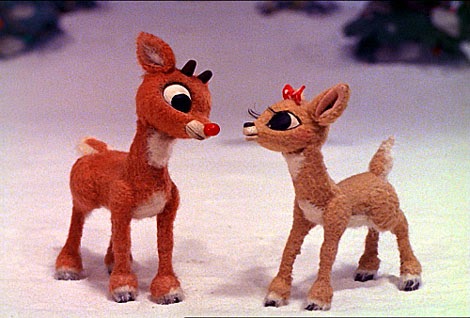 Christmas TV Party 2014: Mitchell Hadley at It's About TV!
1) What is the first Christmas special you remember watching?
I think it was probably Rudolph, watching it at the home of my friends the Gunners, which would have made me probably 7.  I even remember that there were parts of it I didn't like, which means it wasn't the first time I'd seen it, nor does that mean it was the first one I ever watched, but that's the farthest back Christmas special I can remember.  If not that, then Mr. Magoo's Christmas Carol, which I also remember from a long time back in the late 60s.
2) Name one Christmas program/movie you enjoy watching all year round.
I generally segregate the seasonal shows; I don't really watch them the rest of the year so that I don't get tired of them.  But one movie I think can be watched year-round is Going My Way - I've always considered it a Christmas movie because it's been shown at that time of the year so often, but Christmas plays such a small role in the story that it can be enjoyed at any time.  As a second choice, I'd add Larceny, Inc. with Edward G. Robinson - I've never actually watched it at Christmastime in fact, but hey - it ends on Christmas Eve!  It counts!


3) Name one overlooked, or under-appreciated Christmas program.
Well, I'm always going to be biased toward Amahl and the Night Visitors because it's been so long since it was on TV, and very few people today know just what a sensation it was when it aired, what an important role it plays in the history of television.  To get a front-page review in "The New York Times" is not something that very many television shows get.  As a secondary choice, I'd mention Tennessee Ernie Ford's "The Story of Christmas," which was the first hour-long network special presented without commercials, and has a religious theme that would be unthinkable on network TV today, and an unforgettable animated segment on the Nativity that runs 18 1/2 minutes.
4) Send us to 3 places on the internet.
1) The Onion's AV Club, especially their TV page- www.avclub.com/tv/.  The TV reviews of current series are very good if you like current series (which, for the most part, I don't), but their writing on classic TV is terrific.  2) The Classic History TV Blog - http://classictvhistory.wordpress.com/.  Stephen Bowie has some of the best writing on classic TV that's out there.  3)  Uniwatch - www.uni-watch.com.  If you're nerd enough to be interested in "the obsessive study of athletics aesthetics," you have to check out this blog that concentrates on the study of sports uniforms, but every once in a while tosses in some sociology on the side.

5) What are your 3 favorite Christmas episodes of a TV sitcom or drama?
This is challenging, since most of my favorite Christmas shows are specials, but I'd name these without hesitation: 1) The Jack Benny Program where Jack goes Christmas shopping - Mel Blanc absolutely steals the show.  2) "The Changing of the Guard" on The Twilight Zone.  Most people will think of the wonderful "Night of the Meek" with Art Carney, but I'll shine the spotlight on this story, in which Donald Pleasence plays a schoolteacher who feels his life has been a failure, and plans to commit suicide on Christmas Eve, when the ghosts of his former students appear to tell him of the impact he's made.  There's a Christmas concert on the radio that night, and the image of listening to Christmas music alone on Christmas Eve has remained with me since.  3)  "The Big Little Jesus" on Dragnet - how can you possibly pass up Friday and Smith (and later Friday and Gannon in the remake) hunting down the "heinous" criminal who'd steal a statue of the Baby Jesus on Christmas Eve?