1) What is the first Christmas special you remember watching?
Like just about everyone has said, it was Rudolph, the Red Nosed Reindeer.

2) Name one Christmas program/movie you enjoy watching all year round.
I don’t know about a specifically Christmas-themed movie, but I have at least two favorite films with Christmas scenes in them (that makes them Christmas movies, doesn’t it?) that I often watch at any time of a given year. One is probably on the list of a lot of Christmas fans: Meet Me in St. Louis (1944). The Christmastime (Winter 1903) scenes are so beautifully done and are the emotional heart as well as climax of the story; no wonder it is at Christmastime that Papa decides the Smith family will stay in their St. Louis home instead of moving to a strange city. The other is the sparkling Desk Set (1957) starring Katherine Hepburn as a TV network research librarian and Spencer Tracy as a computer inventor. This sophisticated workplace-rom-com features a Mad Men-type office holiday party that is a joy to behold, offering a decidedly different take on merrymaking then one might see in something like, oh, I don’t know, say Meet Me in St. Louis. The filmmakers also take dramatic advantage of the jovial Yuletide setting to bring the story up short by revealing that the “villain” of the movie—the electronic brain, EMERAC—will be installed after the holidays, threatening the jobs of Hepburn and her close-knit team.


3) Name one overlooked, or under-appreciated Christmas program.
I’m tempted to say The Box of Delights, a phantasmagorical mini-series produced in England and shown in the US as part of the PBS Wonderworks anthology series. Based on a popular British book, this fantasy-adventure—full of 1980s special-video-effects—centered on schoolboy Kay who while home for the holidays encounters a mysterious man who entrusts to him a small wooden box with magical powers, taking the boy on all manner of enchanted escapades.

But instead I’d like to single out a special from Rankin/Bass, the producers of such holiday favorites as Rudolph, Santa Claus is Coming to Town, et al. First shown in 1975, The First Christmas: The Story of the First Christmas Snow is a charming, low-key tale of a blinded shepherd boy taken in by the kindly Sisters of the Abbey, led by Sister Theresa (the voice of Angela Lansbury). One of the few Christmas TV specials that doesn’t deal with Santa Claus, this unique show is understated in its spirituality, which still comes shining through with the miracle that occurs during the village children’s performance of the Nativity pageant. Produced in the signature style of Rankin/Bass’s “Animagic” (articulated puppets who come to life in stop-motion animation), the upbeat and touching musical features a lovely rendition of “White Christmas” by Angela Lansbury.  One of the reasons this special may be so little known is that when it’s recalled at all, the needlessly complicated title throws everyone off. An understandably confounded audience has called it everything from The First Christmas to The First Snow to That Show about the Nuns and the First Snow. The title is not only confusing; it’s inaccurate in that the focus is not the first Christmas (except in the pageant).  (Interestingly, the special was to have originally been titled The First White Christmas, but legal problems with the use of the Irving Berlin song as part of the title may have been the reason for the change.) Whatever the title is, however, this gentle TV gem is worth seeking out.

4) Send us to 3 places on the internet.
The Issue at Hand
A fun site from writer Joe Torcivia about classic film, TV, comics etc. Check out Joe’s in-depth, multi-part history of Gold Key comics.

Yowp and Tralfaz
This is a two-fer. The historian simply known as Yowp writes in his Tralfaz blog about animation, old time radio and classic show biz, while in his Yowp blog he extensively covers classic Hanna-Barbera cartoons.

The Enchanted World of Rankin/Bass
This blog is mentioned on Joanna’s hit parade at right but is always worth actively promoting. Historian Rick Goldschmidt celebrates the history and heritage of Rankin/Bass, creator of those unforgettable Christmas specials. 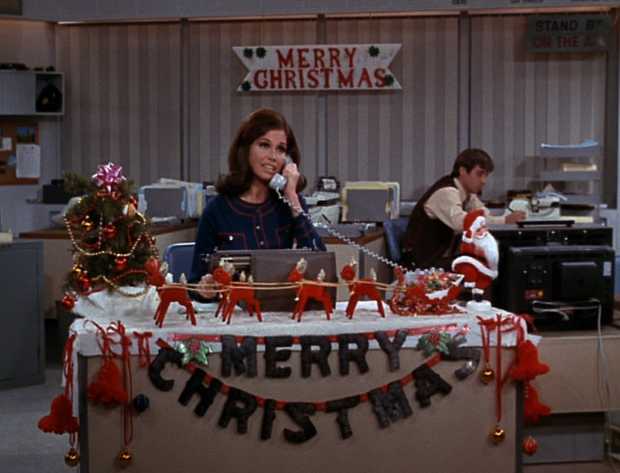 5) What are your 3 favorite Christmas episodes of a TV sitcom or drama?
I’ll skip dramas, though there are some very good examples, including the Christmas episodes of Mad Men (especially The Christmas Waltz), and “The Best Christmas” from the fifth season of The Waltons. (The Homecoming is of course an excellent show but that was a Christmas special, the inadvertent pilot, for The Waltons, so I personally don’t consider it part of the series proper.) But on to the comedies!  Very difficult to choose only three because so many good series have good Christmas episodes—All in the Family, The Bob Newhart Show, Frasier, Roseanne, Everybody Loves Raymond… I even love the I Love Lucy Christmas ep, which is really just a clip show.

But here are my top tinsel-time picks:

The Mary Tyler Moore Show: “Christmas and the Hard Luck Kid II”
This is hands-down my favorite of all TV holiday episodes. I watch it every single year. The MTM Show creators, Allan Burns and James L. Brooks brilliantly use the newsroom setting in this first-season episode, as Mary Richards realizes that she actually has to work on Christmas Day. Prevented from returning to her hometown because of this TV vocational reality—the news doesn’t stop for holidays—Mary is cheered by her Minneapolis friends and co-workers who she increasingly comes to think of as family. This comedy series always had a poignant edge, and no more so than in this heartwarming episode.

The Lucy Show “Together for Christmas”
Spending their first Christmas together, the blended family of widower Lucy and divorcee Viv find that sharing conflicting traditions (gifts opened on Christmas morning vs. Christmas Eve, turkey vs. goose for the feast, etc.) is as likely to ruin a holiday as enhance it. Years ahead of such now-common fare as Modern Family, this Yuletide episode of the second of Lucille Ball’s three hit shows (this series was wonderfully done in its first two seasons or so) is an annual favorite of mine, given its comedic conflict and its moving resolution, brilliant pulled off by one of TV’s greatest teams, Lucy and Vivian Vance.

Family Ties “A Keaton Christmas Carol”
I usually avoid Christmas episodes that are parodies of Dickens’ A Christmas Carol, simply because it’s so overdone, overly familiar and just lazy. This Family Ties favorite, which I saw for the first time last Christmas because of its easy accessibility on Netflix, is a rare exception. Perhaps this well-done Christmas Carol re-do is particularly appealing because the Scrooge-theme fits well with the character of Alex P. Keaton, and the always excellent Michael J. Fox is both comedic and moving in his renewed appreciation of his family at Christmastime.)