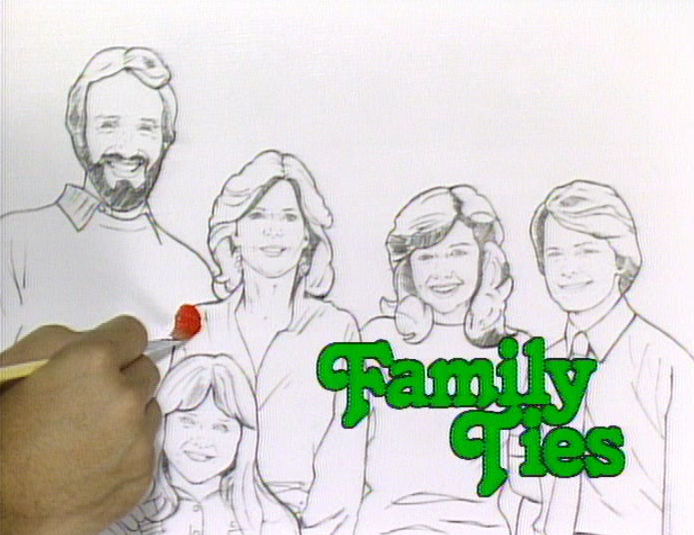 Of all the dozens of sitcom adaptations of Charles Dickens' A Christmas Carol, this particular episode has been a favorite of TV fans for a long time.  Not only is Family Ties a series that continues to charm watchers but "A Keaton Christmas Carol" from 1983 is a stand out episode.  Why do you think this version of A Christmas Carol stands the test of time?

You remember the plot, right?  The episode begins on Christmas Eve with Elyse, Steven, Jennifer, and Mallory decorating the Christmas tree and noticing the beauty of the recent snowfall.  However, Alex doesn't share their holiday spirit--he's not caught up in this "silly sentimental farce."  Although he was asked to get a bottle of cough syrup for his youngest sister's cold symptoms, Alex has forgotten and promises to get some tomorrow--unconcerned that the stores will be closed on Christmas day.  Alex is also not interested in posing for this year's family Christmas photo either.


Uttering those famous last words, "Christmas!? Bah Humbug" as he lies in bed, Alex soon finds himself haunted by the Ghost of Christmas Past.  The spirit takes Alex on a little journey to re-visit Christmas from ten years ago.  Alex sees that as a child, he was filled with the right Christmas attitude--he enjoys watching others open their Christmas gifts, he leads the singing of Christmas songs, and it was initially his own idea to begin taking an annual family photo in front of the Christmas tree.


Although Alex wishes he could continue to re-live this happy Christmas from his past, the ghost takes him back to his bedroom in the present.  Immediately Alex is greeted by a second visitor, the Ghost of Christmas Future--this one looks just like his other sister, Mallory.  Alex is whisked away to catch a glimpse of the holiday thirty years in his future--a vision that doesn't look so bright.


Alex learns in his future he is very wealthy and living in New York while his family is destitute.  His mother ekes out a living taking in other people's laundry, Mallory is pregnant while her husband serves time in debtors' prison, Jennifer sells dirt for a living, and Steven is unemployed--since Alex fired him from his job!  Poor Jennifer can barely speak--she has a severe sore throat from a lingering cold.  Too bad she can't afford to buy herself cough syrup!

On his way to celebrate Christmas in Las Vegas, Alex has stopped by to see his family in order to drop off his laundry.  In line with Dickens' script, present-day Alex is horrified by this vision of himself and his loved ones.  He vows to change his life in order to prevent this future from ever happening.  Sure enough, on Christmas morning Alex has had an attitude adjustment.  The teenager has run to the store for Christmas presents to show each member of his family how much he loves and appreciates them.  And, Alex insists the Keatons pose once more for their annual family photo in front of the Christmas tree.

I have my own theories why this sitcom adaptation of A Christmas Carol still resonates with TV fans.  One strength of this particular episode is that the jokes and punchlines are well written and still sharp after all these years.  Alex threatening to call the police on a happy group of carolers which includes a church pastor is hilarious.  So is Alex's fear of going bald.  Another strength of this sitcom adaptation is that Dickens' Ebenezer Scrooge character fits an exaggerated Alex P. Keaton of the future pretty reasonably.  It is not a stretch to see the business-centered, money-focused teen evolve into a lonely, self-centered Scrooge.  But I think the heart of this episode lies in Alex's transformation.  Young Michael J. Fox is thoroughly convincing when he decides to change his future and we see him express what seems like authentic compassion and genuine affection for his family members.  That's a special gift Fox still brings to his roles--and he shows his masterful skill here despite the sitcom's short length format.  It can't be easy to be both funny and heart-felt in less than thirty minutes.  I think "A Keaton Christmas Carol" is an excellent example of how to do both.