The DuPont Show with June Allyson: A Silent Panic (1960) Christmas

J.A. Morris and RigbyMel from Holiday Film Reviews have graciously shared another one of their clever reviews with me.  Today they discuss the rare TV episode "A Silent Panic" from the anthology series The DuPont Show with June Allyson.  This lost episode has recently been released for viewing after many decades of obscurity.  Many thanks to J.A. Morris and RigbyMel for guest posting today! 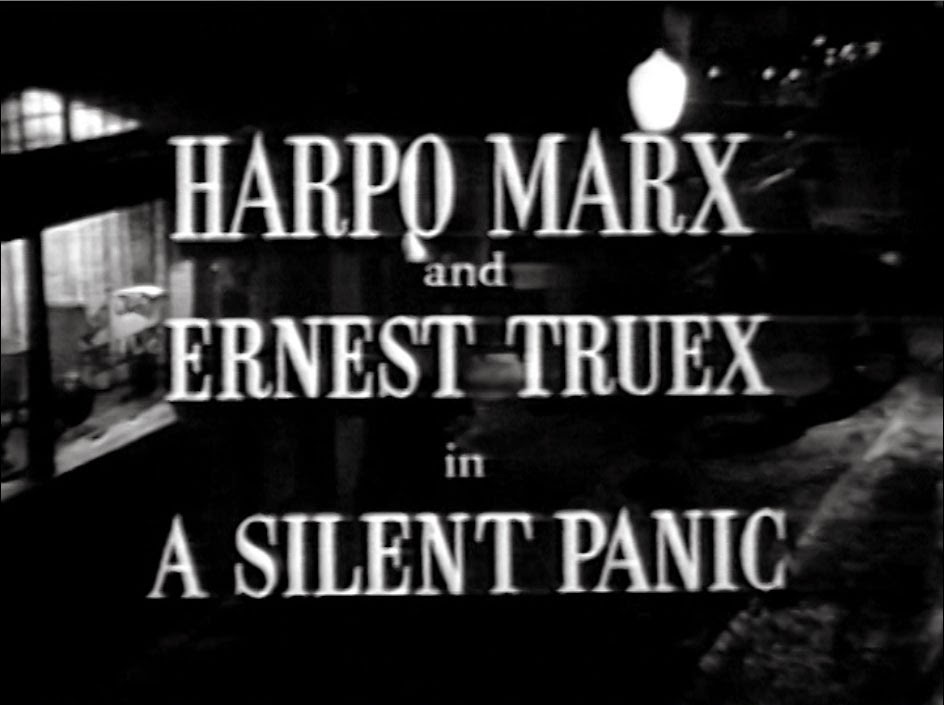 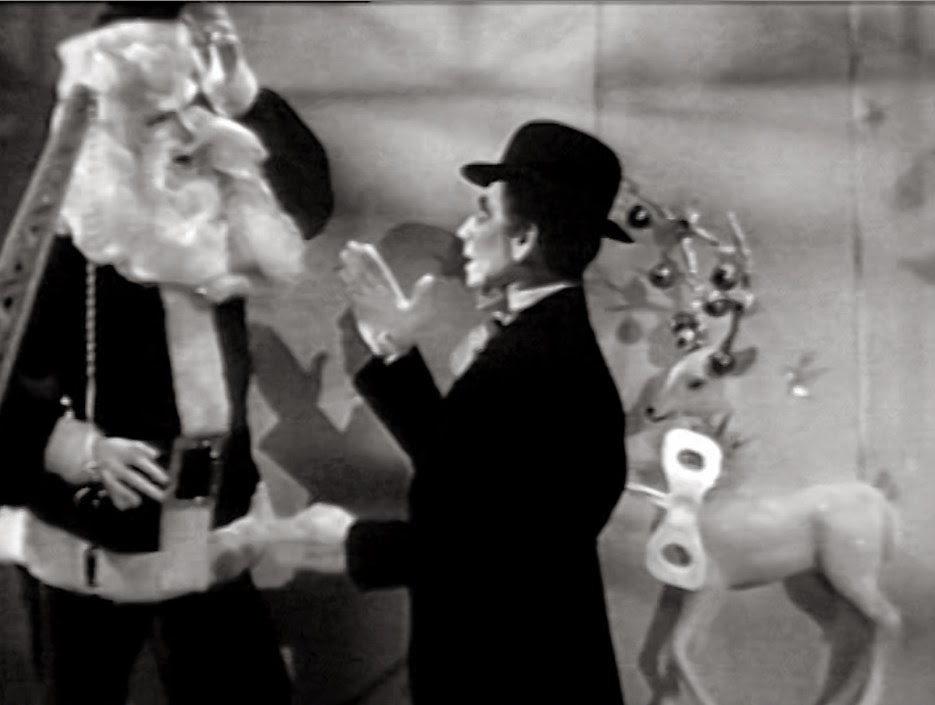 The DuPont Show was an anthology series that ran from 1959 to 1961 and was hosted by actress June Allyson.

A man known only as "Benson" (Harpo Marx) is employed as a "mechanical man" (sort of a human wind-up toy) in a department store's Christmas window display.


During one of his performances, a crowd gathers in front of the window to watch.  One of the spectators is gunned down, two hit men escape. Benson is the only witness to this crime. Benson is brought in for questioning by the police, but there's a problem.  He is deaf, mute and can't help identify the gunmen.  This frustrates the police.


The killers want to take Benson out of the picture, so they stake out the department store. 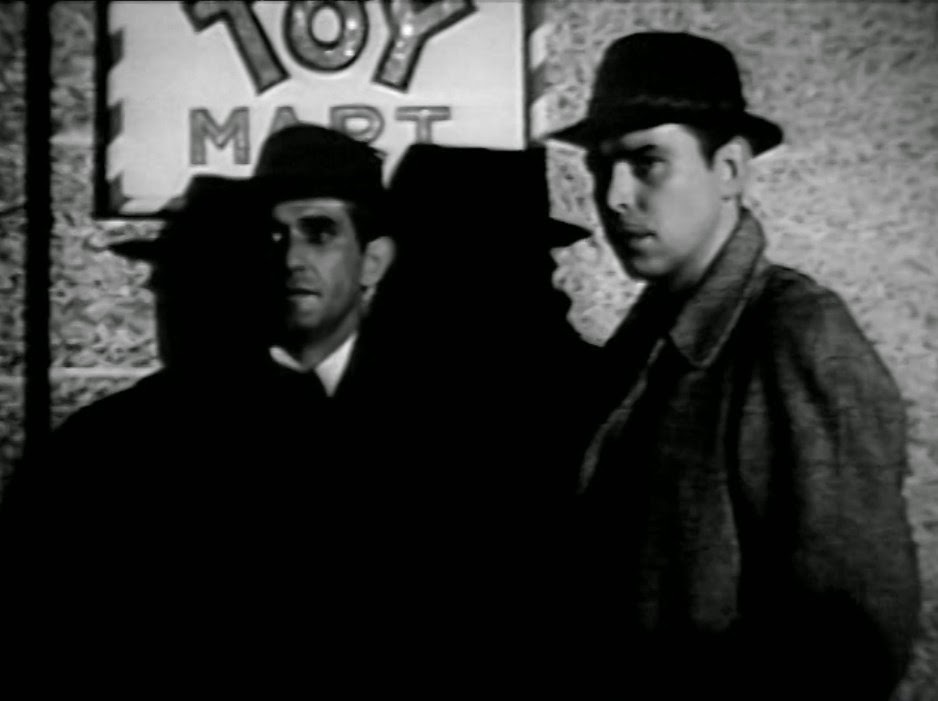 Benson notices them on his way to work and a chase ensues.  He hides at a warehouse until dark.  Daniel, the night watchman (Ernest Truex) sees him and offers him shelter. 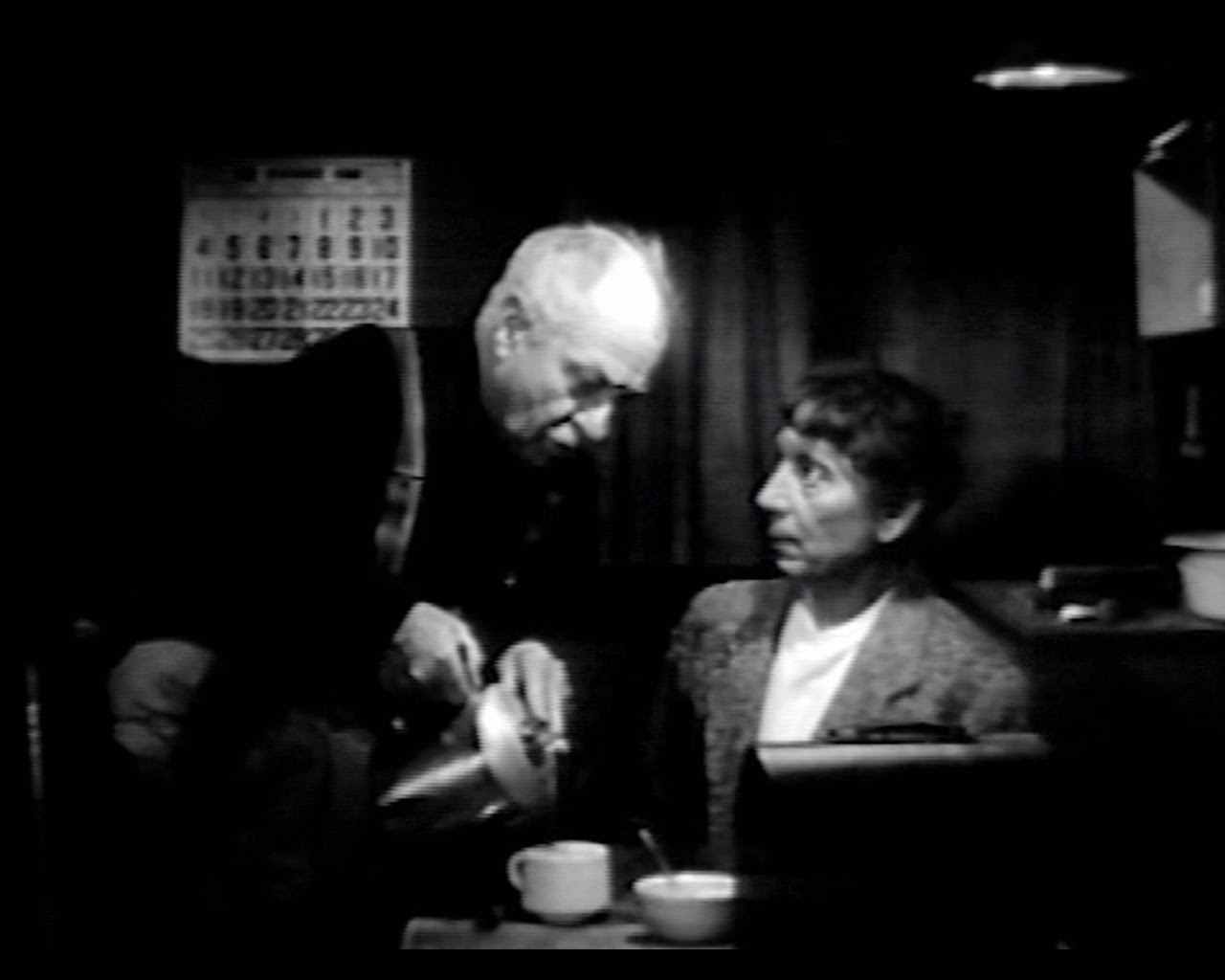 Daniel is a lonely widower and is glad to have company for the night.  He loves to talk and calls the deaf Benson "the best listener" he's ever met.

The gunmen notice activity at the warehouse and pay a visit.  Daniel gives them the runaround, but they rough him up, believing he will lead them to Benson. 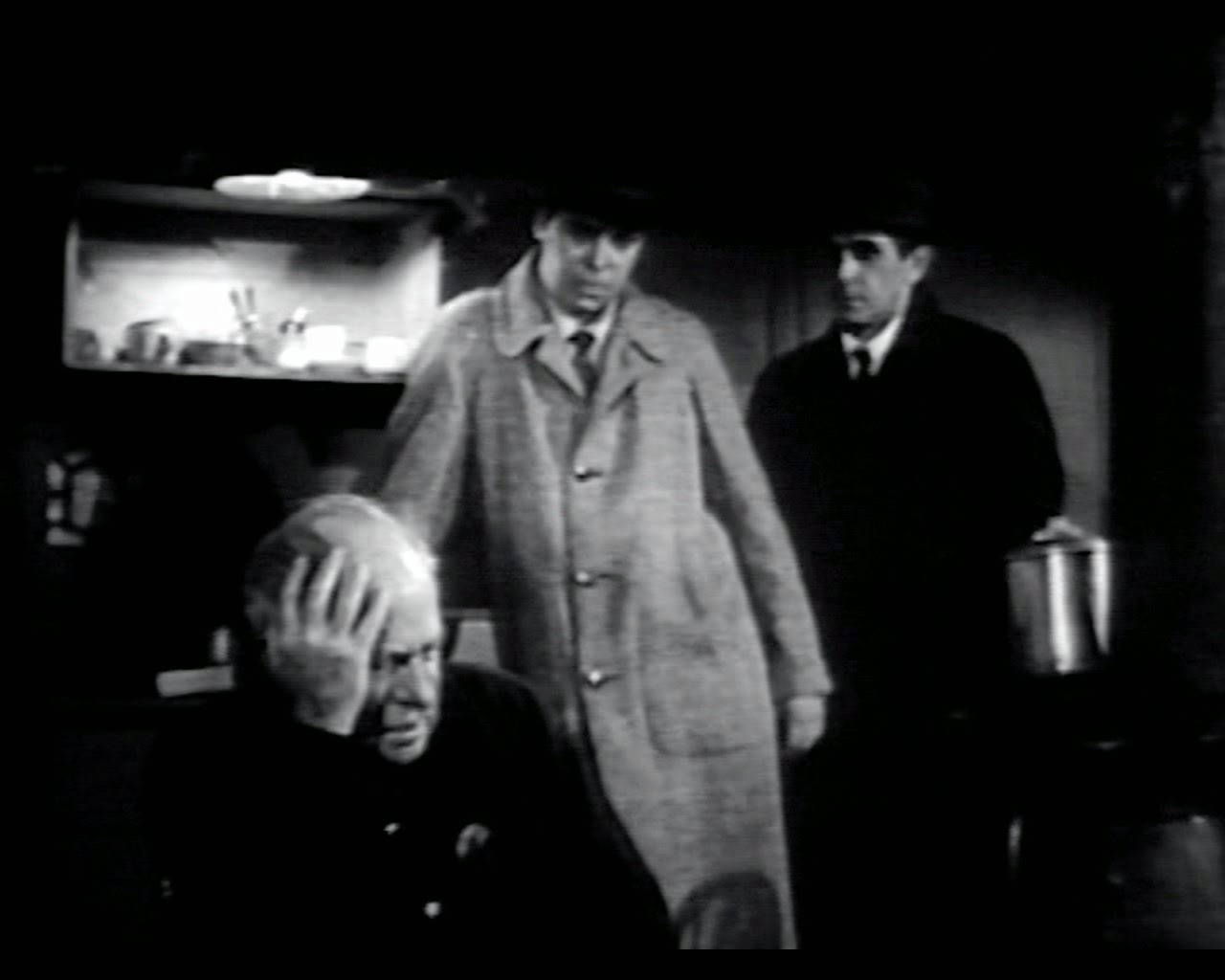 Benson escapes and tries to get help in hopes that the police will come to rescue Daniel. 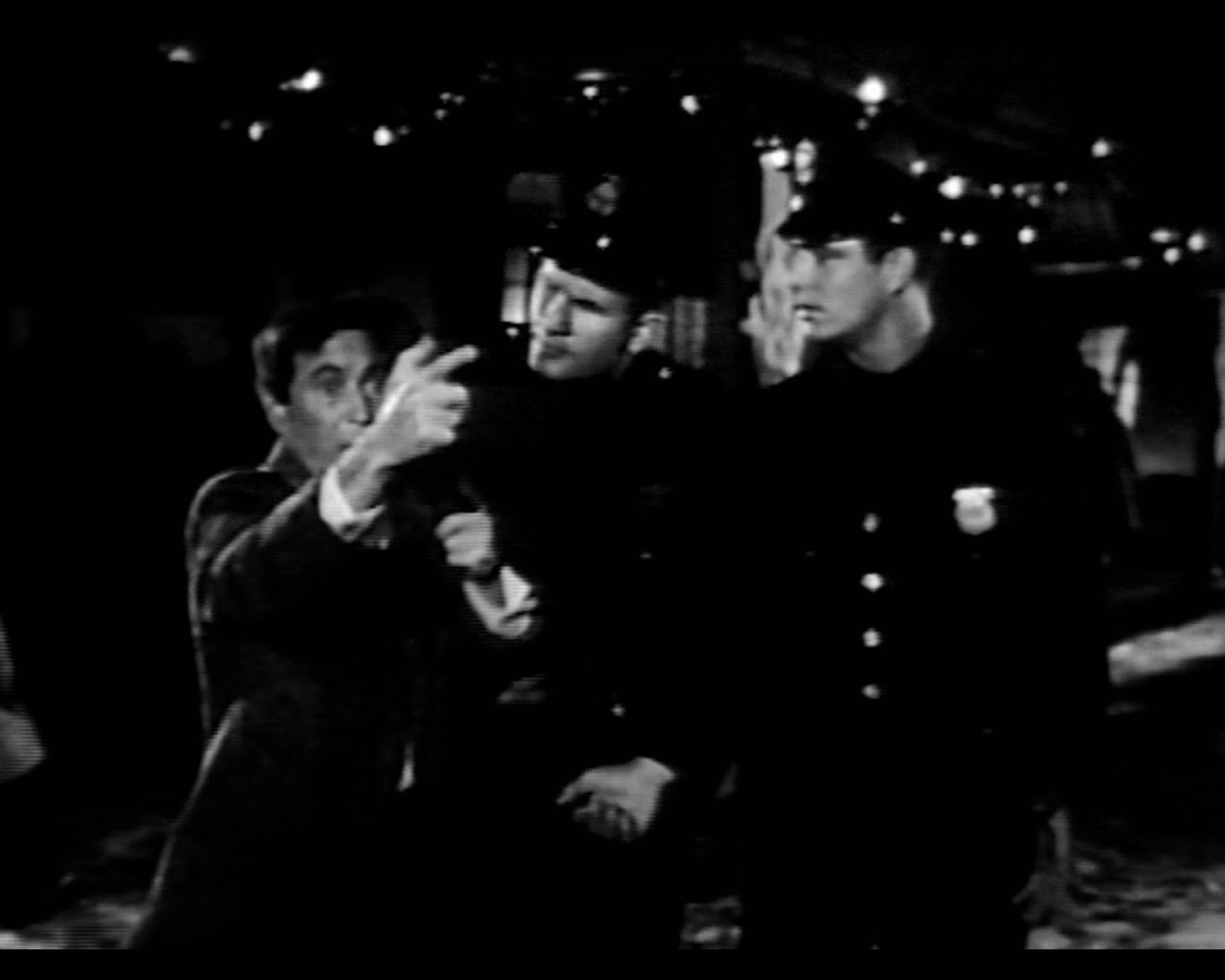 J.A Morris says:
I've been a huge fan of the Marx Brothers for most of my life and "A Silent Panic" is something I've been aware of for years.  But beyond a brief clip in a documentary, I'd never seen any footage until it was released on DVD last summer as part of The Marx Brothers TV Collection.


This is Harpo Marx's first dramatic performance.  He was getting pretty old at this point (72 when it was broadcast).  But signs of his old impish character are still on display, especially during the scene where he walks to work.  It's a wonderful performance, Marx conveys so much emotion here with facial expressions and a few gestures.

While it's certainly a "Christmas" story, the holiday makes its presence felt in subtler ways.  The soundtrack features bits of "Hark The Herald Angels Sing", "Jingle Bells" and "Good Christian Men Rejoice."   The interactions between Benson and the night watchman are very touching, there is lots of Christmas "good will" being shared between these men.  You might say their Christmas present is finding a new friend.


If there's anything to criticize, the story is a bit slight.  We never learn anything about the victim of the shooting, the gunmen or why they killed him.  At one point, the police ask Benson's boss if Benson is illiterate.  The dialogue sort of dances around the answer.  With the exception of Benson, none of the characters are given names.  All the names listed in this review were taken from IMDB. But on the whole, “A Silent Panic” is very entertaining and heartwarming.

In his memoir, Harpo Speaks, Marx says that whenever he had trouble remembering someone's name, he would call them "Benson."  So I'm guessing his character's name was sort of an inside joke.

While Harpo needs no introduction, here’s some information about the rest of the cast and crew:

"A Silent Panic" was directed by Arthur Hiller.  During his 50+ year career, Hiller directed many TV episodes and films, including Love Story and The Americanization Of Emily.

Daniel, the kindly nightwatchman is portrayed by Ernest Truex, who was a prolific actor in film and television. His career began in 1913, his credits include the screwball comedy classic His Girl Friday.

"A Silent Panic" is a poignant Christmas tale of lonely people finding friendship in unusual circumstances.  It features a wonderful performance from Harpo Marx near the end of his career.  This show is recommended and is must-see for fans of the Marx Brothers.  I also recommend The Marx Brothers TV Collection, it would make a great Christmas gift for fans of Harpo and his brothers.

3 and a half candy canes.

"A Silent Panic" is quite an interesting holiday rarity.   As J.A. Morris points out, the story itself is somewhat slight, but it's quite an endearing tale anyway, due to the acting.  The script and the actors interpreting it do a lot more showing than telling. 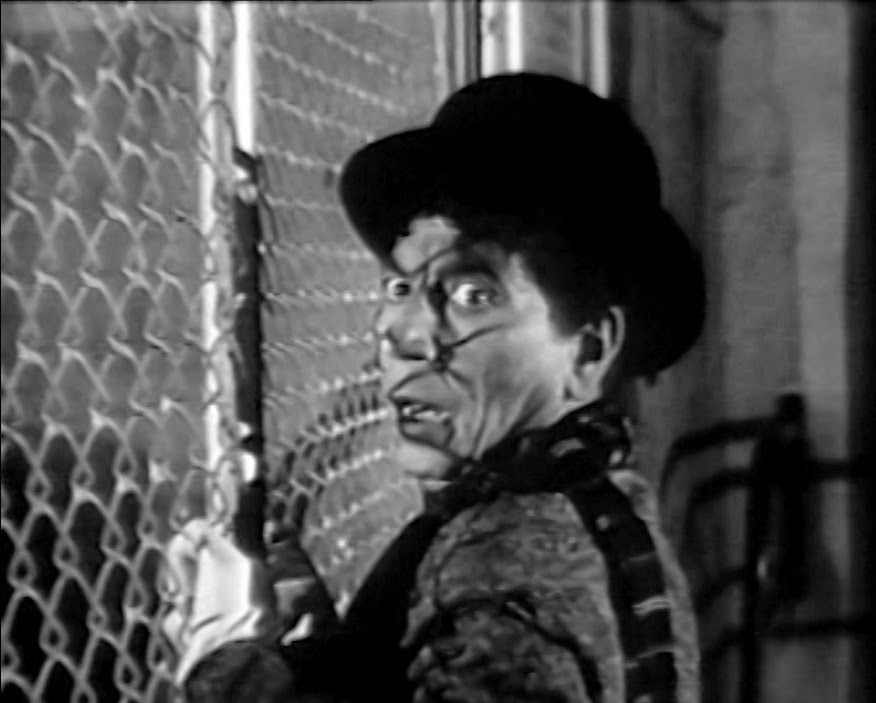 We see the kindness of the night watchman as he shares his meal with the frightened Benson.  Harpo Marx's skillful performance as Benson communicates the character's whimsy and worry without ever uttering a word.  (Benson is sort of the ultimate in "show, don't tell" characterization!).   The holiday message of being kind to one's fellow man comes through loud and clear without coming across as twee.    I also quite enjoyed checking out the "holiday downtown of yesteryear" decorations and sets. 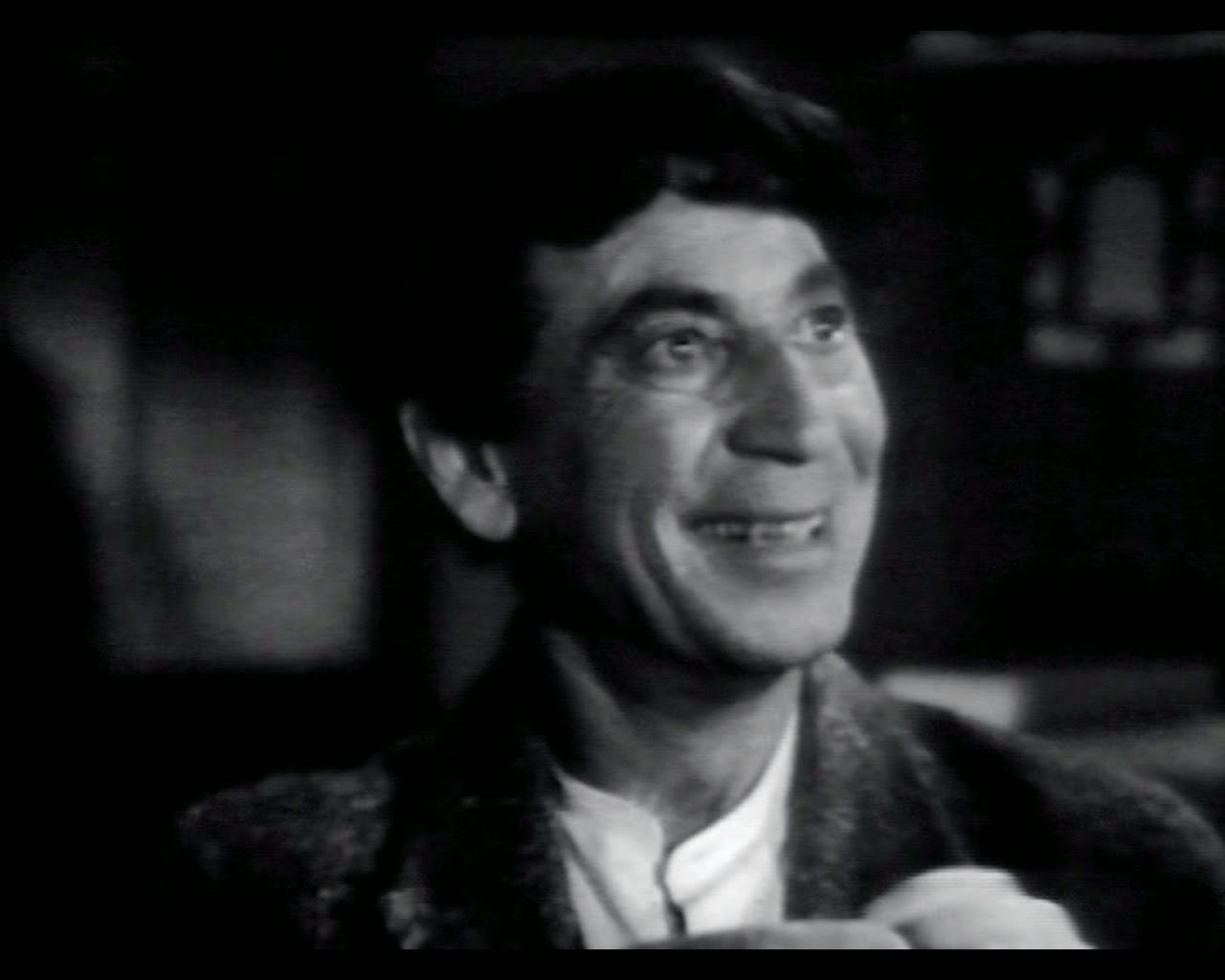 "A Silent Panic" is well worth checking out if you have the time and inclination this holiday season.