Thank you for continuing to support Black History Month. I enjoy celebrating BHM on my blog because there are so many excellent holiday episodes, specials, and TV movies with exceptional African-American cast members. There are also many outstanding or touching Christmas TV story lines aimed at black audiences. During the month of February each year, I like to highlight just few of my favorites.

During its third season, Good Times put out a most unusual New Year's Eve episode. While most of us think of fresh starts at the beginning of the new year, we often overlook the complementary meaning of the ending or the death of the old year. In the 1975 holiday episode "A Place to Die," TV audiences are challenged to consider death and dignity. Here, let me remind you about this special Good Times episode.

A few days before New Year's Eve, an elderly man named Hubert Johnson shows up on the doorstep of the Evans family. Johnson is Michael's friend--it is explained that young Michael frequently says hello to Mr. Johnson each day on his walk past the rest home after school. Mr. Johnson has enjoyed listening to Michael's stories about his family and now he's come to ask a favor.

Hubert is convinced that he's going to die soon and he'd like to pass on in the Evans family apartment rather than his rest home! The shocking (and awkward) request seems foolish to Florida. She points out her most obvious concern--no one really knows when they are going to die. However, Hubert is very persuasive about staying in the apartment, and the more he speaks, the more everyone else in the room feels compassion for him.

Florida, Thelma, J.J., Michael, and Willona hold a family meeting and discuss Hubert's awkward request. Everyone agrees that Mr.Johnson is being foolish about knowing he's going to die soon but they want to let him stay because it will make the lonely old man happy.  Mr. Johnson doesn't want to overburden the family with his outrageous request so he rents a bed for himself and promises to leave if he doesn't die by the new year. Florida finally agrees with the group and consents to let Mr. Johnson stay.

On the morning of New Year's Eve, Florida receives a telephone call from James--he's been out of town picking up extra work.  His trip home has been cancelled due to a snowstorm and it looks like Florida's plans to see her husband this evening are off. The children each have plans to go out on New Year's Eve but they offer to bring their dates to the apartment so their mother won't be alone this evening. Over the last several days, the family has enjoyed the time they have spent with Mr. Johnson so everyone feels like celebrating together. Of course, Willona is bringing her date to the party too.

The Evans family's New Year's Eve party is filled with music, dancing, and good food. The apartment is brightly decorated with paper streamers and everyone is decked out in their best clothes. Even Mr. Johnson is having a lively good time. As midnight grows nearer, Hubert remarks how odd he feels--he was so sure it was his time to die. He was convinced that the preacher would be eulogizing him by now. With that mention, Willona decides to cheer up the old man by giving him a proper eulogy herself! 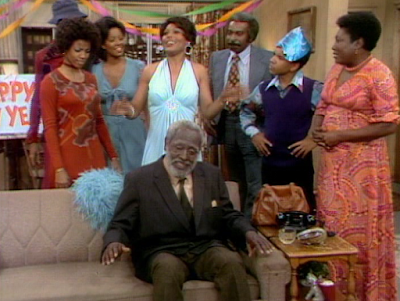 With tremendous effort, Willona begins her eulogy in the spirit of an old-time gospel minister--stomping her feet, clapping her hands, singing and calling out to the congregation as she praises the good Hubert Johnson for his long life and decent character. The spirit moves those at the party and they join in the fun, clapping and celebrating life as they form a line and march around the apartment. Hubert is excited to celebrate too and he joins the train of marchers as they file past.

At first, no one notices when Hubert drops off the back of the train of revelers. When he's found slumped in the chair, it's clear that Mr. Johnson has suddenly passed. The popular New Year's Eve song "Auld Lang Syne" can be heard playing on the nearby television as Florida confirms to everyone that indeed Mr. Johnson has died. The poignant scene is made less so when Florida remarks that Hubert died while enjoying a happy moment surrounded by family. The message is clear: we should all be so lucky to die with such dignity.

While this episode seems pretty hard hitting, it should be noted that the sitcom Good Times made itself a reputation for telling just this type of story. Good Times and several other notable series of the 1970s including All in the Family, Maude, The Jeffersons, and One Day at a Time--all produced by the great Norman Lear--worked to tell stories that challenged TV audiences.  In fact, the actor Arnold Johnson who plays Hubert Johnson in this episode also appeared in another hard-hitting Christmas episode--1978's "George Finds a Father" on The Jeffersons. Click HERE to see my review of that episode again.

If you're a Christmas TV watcher like I am, you'll know that a similar story line was used again in 2004 for a Christmas episode of the animated series King of the Hill. In the episode "Ms. Wakefield," an elderly woman (voiced by Marion Ross) invades the house of Hank Hill and his family so she can die in the home she once owned. King of the Hill's version of the story turns into a nightmare situation for Hank with some dark comedy moments but the similarities remain.

If you'd like to read what else I've written about Good Times, feel free to check out my reviews of the 1977 episode "Penny's Christmas" and the 1978 episode "The Traveling Christmas." Do you have a favorite Good Times holiday episode?