Thank you for continuing to support Black History Month.  I enjoy celebrating BHM on my blog because there are so many excellent Christmas episodes, specials, and TV movies with exceptional African-American cast members.  There are also many outstanding or touching Christmas TV story lines aimed at black audiences.  All month long I've been highlighting just few of my favorites.


In 1978’s “The Traveling Christmas,” daughter Thelma is looking forward to spending her first Christmas with her new husband Keith.  When it turns out Keith has to work on Christmas Eve, the Evans family comes up with a solution.  The family and their friends organize a holiday party to entertain at the taxi garage so they can all be together on Christmas and bring some Christmas cheer to the others working on the holiday.

In this musical revue within the show, we see just how talented the cast of this sitcom really is.  It’s also fascinating to see Penny, played by a very young Janet Jackson--yes, THAT Janet Jackson--singing and dancing.  Although twelve year-old Janet holds her own, her skills have clearly come a long way since this 1978 episode.

Down at the garage, on a little stage built just for the show, J.J. opens the show performing a stand-up comedy routine and serving as the show’s emcee.  If J.J. seems at home on the stage, it’s because he is played by Jimmy J.J. Walker, who cut his teeth doing stand-up comedy, headlining top comedy clubs before landing the role of the wise-cracking teenager on this 1970s sitcom.


Younger brother Michael takes the stage singing the rock song “Rock You to Your Socks.” Ralph Carter who plays Michael is the Tony-nominated actor/singer from the 1973 Broadway show Raisin, the musical adaptation of the play A Raisin in the Sun, which was still playing when Carter joined the cast of Good Times.  Clearly Carter has an abundance of musical talent.  You can also see Carter singing in the Good Times sixth season episode “Florida’s Homecoming: The Wedding” during Thelma’s wedding ceremony.

The next performance during the holiday musical revue is by building superintendent Nat Bookman who disco dances costumed in a Santa suit to an instrumental, funky disco song performed by an unseen band off-stage. The family always likes to tease Bookman and there's often tension between the building's super and its tenants, however I like seeing Bookman here in the full spirit of the season.

Next up is Thelma's husband Keith performing celebrity impressions including Robert Goulet singing “On A Clear Day,” and an impression of Johnny Mathis, Tony Bennett, Jerry Lewis, and then Bill Cosby singing the jazz standard “Misty.”

This is followed by a quartet calling themselves The Pointless Sisters (a parody of the very popular Pointer Sisters).  The group, consisting of mother Florida, sexy daughter Thelma, young Penny, and outspoken neighbor Willona, sing and dance to the show tune “Steam Heat” made popular from the Broadway musical The Pajama Game. This song was also covered by the Pointer Sisters on their 1974 album That’s A Plenty.

As I said before, Janet Jackson holds her own in this song-and-dance routine, however she’s not yet showing off the dance skills for which she would later be well known. Ja’Net DuBois who plays family friend and upstairs neighbor Willona has a powerful voice and co-wrote and sang the classic theme song of the TV series The Jeffersons, another important series of the 1970s with an African-American cast. DuBois also stars in the unforgettable 1969 Christmas TV special J.T. with Kevin Hooks. 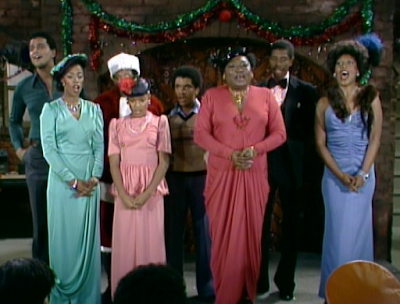 The holiday musical revue closes with all the entertainers returning to the stage to sing “Silent Night” for the cabbies in the audience on Christmas Eve.  Their poignant song even softens the heart of the tough, business-minded boss of the taxi garage, Mr. Clements, who had earlier insisted his cabbies all work on Christmas Eve.

This episode showcases the incredible talent of this series’ cast.  Although not all of the production numbers are holiday themed, the show-within-a-show does exude the holiday spirit and tradition of a musical revue as holiday entertainment.

Do you have a favorite music Christmas show-within-a-show episode?