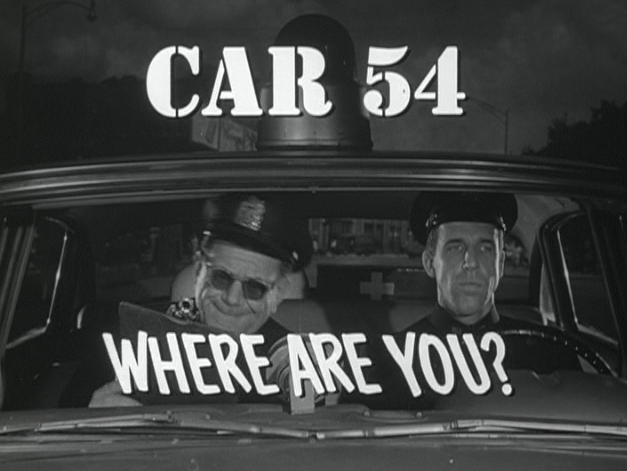 Music has always been an essential ingredient in Christmas programming on television.  If you've read my latest book, Merry Musical Christmas Vol.1: The Best Christmas Music in TV Sitcoms and Dramas, you already know that one of my favorite Christmas sitcom traditions is the show-within-a-show, musical variety episode.  I know this description sounds complicated--but I think you know what I mean.  I'm referring to those fun holiday episodes where the cast of your favorite sitcom decides to show off their talents and "put on a show."  I've already written about several of these holiday episodes on this blog--click the titles to see those linked essays again: The Dick Van Dyke Show, Laverne & Shirley, and Benson.  Indulge me while I share about another Christmas variety show-within-a-show from the classic police comedy, Car 54, Where Are You?  If you'd like to read about more show-within-a-show Christmas episodes, as well as other great musical performances in sitcoms and dramas, please check out my book.  The following is an excerpt from Merry Musical Christmas Volume 1.

"In the 1961 episode “Christmas at the 53rd,” TV viewers are treated with a show-within-a-show storyline as the precinct house hosts a Christmas party for their family and friends, for which Toody and Muldoon serve as co-chairs of the entertainment committee.  The episode consists of a humorous variety show where the officers perform for their guests.  Opening the show, Captain Block sings an original song backed by his patrolmen called “Captain of the 53rd,” which is not unlike a Gilbert & Sullivan tune about being the gallant leader of his precinct.

Next, Lt. Fleischer humorously demonstrates the well-dressed officer’s uniform as he points out the various elements of his uniform from the quick-paced audio description of an official police recording.  Officer Toody solos on “You’re Nobody Till Somebody Loves You” with his partner Muldoon accompanying him on the guitar.

This is followed by Officer Schnauser performing a comedic recitation about police brotherhood. But as Schnauser enumerates the five golden principles of brotherhood (charity, loyalty, harmony, fellowship, and kindness) the group erupts into a brawling mob as they fight over the correct order of the principles.


Next a chorale group calling themselves The Whippoorwills, with lead vocals by Officer Muldoon, performs an original song about how difficult and thankless it is being a police officer--another Gilbert & Sullivan parody, much like “A Policeman’s Lot is Not a Happy One” from The Pirates of Penzance.


And, partners and buddies Toody and Muldoon finish the musical revue with a duet, singing “We Belong to a Mutual Admiration Society.”

Although most of the music within this Christmas episode is not holiday music, it is a very Christmasy episode with Christmas decorations that fill the police stationhouse, and a strong feeling of festivity and Christmas spirit that the characters express to one another again and again.

It’s a surprising treat to hear actor Fred Gwynne sing.  Gwynne plays Officer Muldoon in this TV sitcom, however TV viewers may better remember him for his role as Herman Munster on TV’s The Munsters.  If you’re curious to hear him sing more in a Christmas program, you can dig up a copy of 1969’s The Littlest Angel, the Hallmark Hall of Fame TV movie musical where he plays the guardian angel, Patience.  Gwynne sings “Once Upon Another Time,” “What Do You Do (When You Say You’re Doin’ Nothin’),” and with Johnnie Whitaker he sings "Where is Blue" in the musical adaptation of the popular children’s book by Charles Tazewell."


Fred Gwynne as the angel Patience singing "Once Upon Another Time" in 1969's Littlest Angel.