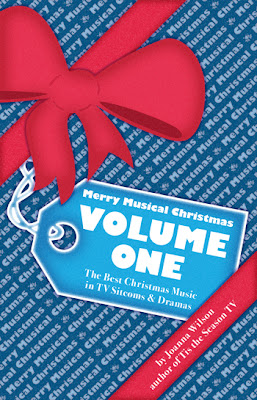 In my new book Merry Musical Christmas Vol. 1, I discuss the best Christmas music in TV sitcoms and dramas.  One of my personal favorite musical Christmas episodes is "The Alan Brady Show Presents" from The Dick Van Dyke Show.   My discussion of this classic episode is found in the first chapter.  "The Alan Brady Show Presents" is an example of a Christmas tradition on television--it is a musical revue, or a show within a show.  Other Christmas musical revues I discuss in the book include episodes from Car 54, Where Are You?, Laverne & Shirley, The Facts of Life, Good Times, Benson, Ally McBeal--and even South Park.


In an attempt to re-create the popular structure and entertainment of a musical variety show, sitcoms sometimes create musical revues in a show-within-a-show format.  Viewers get treated to entertainment of the highest quality with complete songs as well as dance numbers and comedic acts, performed by their favorite sitcom characters.

An excerpt from the first chapter in Merry Musical Christmas:


The opening number is legendary.  Buddy, Sally, Mel and Laura come out on stage dressed in choir robes followed by Rob as their choir director.  Tapping his baton, the formal director leads the group in a song he claims immortalizes the great man, as the foursome sing the name of the star of the show “Alan Brady” over and over to a beautiful melody.  The first time the song is sung through, the dignified conductor is choked up by emotion.  The second time the song is sung through, each of the singers takes a solo chorus singing “Alan Brady” however, in the final verse, TV writer Buddy substitutes his own name in place of Alan Brady’s--and he’s sent off the stage in disgrace."


"The next sing-through of the song goes beautifully once again until the final verse where TV writer Sally substitutes her name instead of singing the name Alan Brady.  She too is sent away off stage, carrying her music stand in shame.  The conductor prepares to begin again when Laura bursts out singing her own name and rushes off stage before the music even begins."

"With only producer Mel Cooley remaining on stage, the conductor begins again and Mel sings as directed.  The conductor holds up his hand to halt the music, and Rob turns to the audience remarking that he trusts this singer as he’s Aan Brady’s brother-in-law--only to have Mel sing out his own name and rush off stage in defiance!  Amidst the laughter from the audience, Rob forces himself to say his own name and he too makes his exit."


This musical performance and comedy sketch is contagiously singable--don’t be surprised if you find yourself singing the “Alan Brady” song at Christmas time.  If you've seen this bit of comedy gold, you'll know why it's one of my favorites.  And this is only the first sketch of the episode!  What's your favorite musical moment in a Christmas-themed sitcom or drama?

The full episode is curently available streaming on Netflix. Here's a video clip of the song I describe.  Sorry about the quality--the video kicks in about 1 minute into the clip.

Merry Musical Christmas is now on sale at Amazon and on this website.
Posted by Joanna at 2:55 PM