This essay, written by me, first appeared at Holiday Film Reviews during Dickensfest, December 2012.  Much thanks to JA Morris and RigbyMel for inviting me to participate in Dickensfest--a tribute to Dickens' most popular work A Christmas Carol in honor of the author's 200th birthday.  You may remember that JA Morris and RigbyMel have guest blogged for me here during my Christmas in July celebrations in both 2011 and 2012. 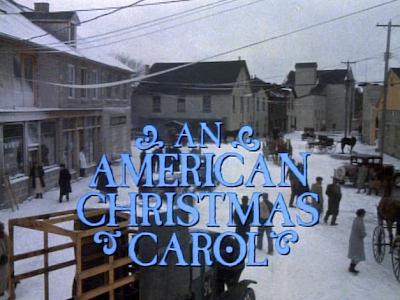 In honor of the 200th anniversary of the birth of author Charles Dickens, it’s the perfect time to once again reflect upon one of his most popular works, A Christmas Carol.  I’m sure that one of the reasons that A Christmas Carol continues to remain popular is due to the seemingly endless number of adaptations that have been and continue to be made.  One adaptation that stands out to me is the 1979 made-for-TV version, An American Christmas Carol.


I’m one of those people old enough to remember when this movie first premiered on television in 1979.  It was well advertised by the network to promote the actor playing the lead role, Henry Winkler, who was extremely hot at the time playing the motorcycle-riding, ladies’ man, Arthur “Fonzie” Fonzarelli on the hit TV series Happy Days.  I think today’s TV audiences would more likely recognize Henry Winkler from his role as the incompetent lawyer Barry Zuckerkorn on TV’s Arrested Development.  No matter, Winkler as Ebenezer Scrooge--here named Benedict Slade--is almost unrecognizable under the thick make-up (and a latex facial prosthesis, I assume) used to create a much older man in need of a Christmas attitude change.


There are two particular elements of this adaptation that make it noteworthy.  The most significant is the change of setting, from Victorian-era London to Depression-era New England, more precisely New Hampshire.  This change, I believe, makes the story and its message more clear and accessible for American TV viewers.  Gone are the references to prisons for the poor.  Modern audiences can more clearly connect with the pain of enduring unemployment known throughout the Depression.  Tiny Tim’s mysterious ill health is also changed.  Now the character, re-named Jonathan, suffers from infant paralysis, or polio, and his health and future well-being can be improved with treatments from a far away clinic.

Another change made to communicate Slade’s (Scrooge’s) more hopeful attitude adjustment is his willingness to put his money where his mouth is: investing in re-opening the recently closed quarry.  This business decision will not only benefit Slade’s pocket but will provide jobs once again for the entire community.  While An American Christmas Carol, much like the original book, is filled with charity-giving, it seems uniquely American to adapt the story to include the use of capitalism, and Slade’s business acumen, to invest in the community’s well-being too.  At the film’s end, we also see the transformed Slade select one troubled boy from the orphanage and offer him an apprenticeship with his business, much like the young Slade was offered by a local successful businessman when Slade was living at the orphanage many years ago.  This offering of a leg-up--not a hand-out--seems to reflect certain American values as well.  I find this American business aspect of the 1979 story utterly fascinating.


The second element in An American Christmas Carol that makes it a noteworthy adaptation is the casting and characterization of the Spirits of Christmas.  The Ghosts of Christmas Past, Present and Future that come to haunt Slade on Christmas Eve are the same characters introduced in the beginning of the story.  Each one is a member of Slade’s community and a person he visited earlier in the day in order to repossess something from their homes due to a debt created by their inability to keep up with their payments. The Ghost of Christmas Past is the University Shop owner, played by David Wayne, whose bookstore’s inventory Slade seizes in order to re-claim some minor worth in value from the leather bindings.  Cleverly, the elderly shop owner begs Slade to  not destroy one leather-bound book, a heirloom first-edition of Dickens’ Christmas Carol.  Obviously ignorant of the book’s contents, Slade refuses to respect the shop owner’s pleas, ignoring the recommendation to read the book.


The Ghost of Christmas Present is Mr. Jessup, the director of the local orphanage.  Slade had stopped by earlier on Christmas Eve in order to repossess the piano the children were eager to use as a part of their meager Christmas celebration.  Even though Slade himself had lived in the orphanage at one time, his heart is hardened to the need of these children who already have nothing of their own, but want to raise their voices in celebration of the season.


And, the Ghost of Christmas Future is a farmer, played by Dorian Harewood, from whom Slade had repossessed a pot belly stove, a rocking chair, and a radio--clearly the only domestic items owned by this poor farmer and his wife.  I think that the use of the shop owner, the orphanage director, and the farmer characters repeated as the three Spirits of Christmas more directly connects Slade in a personal way with his heartless actions earlier in the day.  Slade is forced to look at himself and his actions during that long Christmas Eve night by the very individuals he has been insensitive to as well as harmed.  The resolution in the film’s end of Slade returning the repossessed items from a new sense of holiday goodwill ties the the whole story together.  I like the balance that brings to the story.

Lucky for us, An American Christmas Carol is being released on Blu-Ray this holiday season, making it even more accessible for audiences.
Posted by Joanna at 11:10 AM