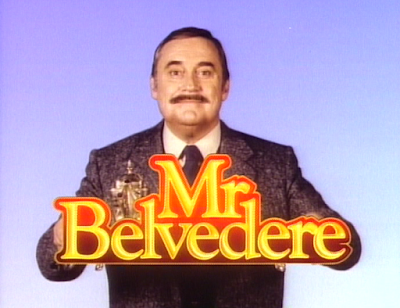 The 80s family sitcom Mr. Belvedere always stood out to me. I remember the series initially grabbed my attention because retired baseball player Bob Uecker played the role of the father George. You may also remember that Uecker was in those attention-getting Miller Lite beer commercials in the 80s too. But what kept me watching the sitcom was the relationship between young Wesley and the butler Lynn Belvedere. Those two loved to tease and torture each other but they shared an engaging affection that was enjoyable to watch. Are you a Mr. Belvedere fan too?


The fourth season of the series produced a memorable holiday episode. 1987's "Christmas Story" offers a gentle plot but one that ends satisfyingly.  Let me remind you about it.

The family is decorating for Christmas and planning the upcoming celebration. Mr. Belvedere explains to the family that he will help prepare the holiday meal but he'll leave it for them to serve themselves reminding them that Christmas is his day off. Marsha welcomes Mr. Belvedere to join them for the special feast, making it clear that they consider him a member of the family too. However, Belvedere says that his tradition is to spend Christmas alone and he prefers it that way.

In their own way, each of the children are also looking to separate themselves from the family's traditional celebration. Kevin is hoping to convince his parents to let him skip the family Christmas plans so he can go skiing in the Poconos with a group of sorority girls. Heather has been invited by her best friend Angela to join her family in the Bahamas. And, greedy Wesley has declared a religious conversion to Judaism so he can cash in on eight nights of gifts during Hanukkah.

These efforts to evade the family's holiday time together hurts Marsha's feelings and she refuses to give her permission to her children for their plans. Everyone begins bickering so they barely notice when Wesley abandons his latest get-rich-quick scheme.

It turns out Wesley and Heather went snooping in Mr. Belvedere's private belongings hoping to get an idea for a Christmas gift for him. They find a pocket watch and a note hidden in a box. Based on the watch's inscription and a cherished letter written in December 1941, Wesley thinks Mr. Belvedere mourns a lost love each Christmas and that's what makes him sad. Wesley decides to hunt down the woman Pamela who wrote the letter some 40 years earlier. He reasons that if he can bring these two love birds together again, Mr. Belvedere will thank him later.

Wesley does indeed track down Pamela in northern England and brings her to Pittsburgh for Christmas. Mr. Belvedere is caught more than a little off-guard when he discovers this guest on the doorstep on Christmas Eve.  Young Wesley has jumped to conclusions from reading the inscription and the letter--causing an awkward reunion for Lynn and Pamela.

Later, Mr. Belvedere explains that he did share a few tender moments with Pamela during the dark days of the Blitz many years ago. However, he keeps the letter and the pocket watch to remind him of his friends he lost during the war--and that is why he feels sad at Christmas time. His feelings of loss help him stay connected to the people that he was once close with.


In the end, Heather and Kevin choose to stay home for Christmas to spend time with the family. Everyone is happy again--except for George who realizes he may have to pay for Pamela's first-class flight from England as Wesley's gift to Mr. Belvedere.

It's nice to see Lynn's feelings--even his mournful, sad ones--aren't expected to change. For many of us, a variety of feelings and emotions come up at Christmas time and I think it seems authentic and respectful to let the character of Mr. Belvedere feel whatever he chooses. For this, I find the episode satisfying.


Are you a fan of the 80s sitcom Mr. Belvedere?