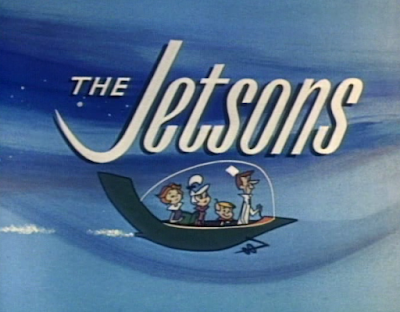 Just as the title indicates, this is a space-age adaptation of Charles Dickens' tale A Christmas Carol. George Jetson is asked (okay--he's commanded!) by his boss Mr. Spacely to work overtime late into the evening on Christmas Eve. Adult viewers can immediately recognize the players here. Mr. Spacely is the greedy, business-minded Ebenezer Scrooge character and George Jetson is taking on the Bob Cratchit role. George dutifully works late on Christmas Eve and then goes home to his loving family.

When George comes home, he finds the rest of the Jetson family in distress. The family dog Astro had opened his Christmas gift early and began playing with the toy robot kitty. Astro was having so much fun, he inadvertently broke the toy and swallowed one of its sprockets. They've tried calling for a vet to look at Astro but it's Christmas Eve and there are no vets on duty. As Astro cries out in pain, the Jetson family worries about what to do. Yes--the family dog Astro in this story is the Tiny Tim character.


Meanwhile, Mr. Spacely is feeling good about the profits he's collected this holiday season. While he drifts asleep at the desk in his office, he's visited by the ghost of his former business partner Mr. Marsley. Marsley warns Spacely about his greedy ways and alerts him to the three ghosts who will visit later tonight. You know where this is going, right?


Mr. Spacely is visited by a ghost who wants to show him visions of his past. The ghost takes Spacely into his past, to a moment from his childhood when his friend George Jetson was working at with him at a Lemoonade stand. Spacely was greedy and kept all the profits from their drink stand back then too.

Next, the second ghost shows Spacely what the Jetson family is doing in the present. He sees how George and the family are worried about Astro--who is suffering in pain. And lastly, the third ghost arrives to show Spacely a vision of the future.


In the future, Spacely sees a lavish home--just like the one he hopes to own--but it's occupied by the Jetson family! It turns out that the Jetsons have the wealthy lifestyle that he's always wanted. How did they become so successful?

Spacely is disturbed to find out that the Jetsons sued him after Astro got sick from eating the broken toy manufactured by Spacely Space Sprockets. Waking up on Christmas morning, Mr. Spacely is looking to change his ways.


Mending his ways, Mr. Spacely brings a vet to the Jetsons home to help treat Astro right away. He also has gifts for the entire family! The Jetson family is so happy that Astro is feeling better--they sing "We Wish You a Merry Christmas" to Mr. Spacely.

This is a fine introduction to Charles Dickens literary tale for children but I think most adults will find this version a bit disappointing. The story uses broad strokes which means there is very little heart. Some of this is because of the half hour length. It should be noted that this animated story was created during the second wave of Jetsons episodes in the 1980s--and not the original run of episodes, first created in the early 1960s. The attention to detail is just not there. The animated Mr. Magoo's Christmas Carol entertained me as a child and it is sophisticated enough to continue to entertain me as an adult. However, A Jetson Christmas Carol lacks any subtleties for adults. Perhaps if this was your introduction to Dickens as a child, you may still have warm feelings for it.

Is there a Hanna-Barbera Christmas special you watch each year with fondness? Share your thoughts in the comments below.