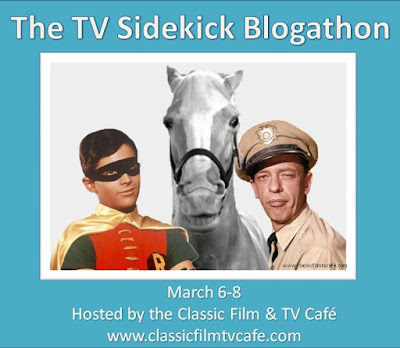 This essay is a part of the TV Sidekicks Blogathon hosted by the Classic Film & TV Café. Click HERE to view the complete blogathon schedule.

We love our favorite TV sidekicks, don't we? Since I limit my discussion here to focus solely on Christmas entertainment, I thought it would be amusing to create a list of Santa Claus' sidekicks: elves! But there are hundreds of elves depicted throughout TV episodes, specials, and movies so I decided to restrict the list to Rankin/Bass animation. You know Rankin/Bass--they're the producer/directors of 20 animated Christmas and New Year's classics. They worked in both cel animation (the traditional style that Saturday morning cartoons were created in) and stop motion animation (the technique that they charmingly referred to as "Animagic.")  While not all of the Rankin/Bass animated Christmas stories include elves, I still had no problem naming my TOP 5 FAVORITE RANKIN/BASS ELVES.  Let's see if you agree with me.

Elves Jingle and Jangle are sent by Mrs. Claus to search the world for a bit of Christmas spirit after Santa has taken to his bed, tired and depressed. The two North Pole innocents find themselves in Southtown U.S.A. looking for someone who still believes in Santa Claus when they meet a young boy named Iggy.


This 1974 hour-long animated TV special has an awful lot of story--including two quarrelsome brothers that overshadow everything else that happens in it. If you can't remember the complicated plot of The Year Without a Santa Claus, I guarantee you remember this animated favorite because of the Snow Miser and the Heat Miser. However, Jingle and Jangle are Santa's sidekicks who travel halfway around the world to help make Claus feel like he still matters to children.

4. Tingler from The Live and Adventures of Santa Claus (1985)

Technically, he's identified as a Sound Imp but the multi-lingual Tingler functions as an elf in this elaborate story. This lesser-known Rankin/Bass holiday TV special is adapted from the book written by L. Frank Baum (whose name you may recognize as the original author of the Wizard of Oz books). The Life and Adventures of Santa Claus unfolds the mythology behind the legendary figure of Santa Claus while the council of Immortals considers making him one of them.

Because of the vibrant fantasy elements in this story, you also see wood nymphs, Knooks, and what looks like fairies also making toys alongside Tingler as Santa's elves. Tingler is such a unique character dwelling in such a rich fantasy world, there's really no confusing him with any other Christmas elf.

Not all of Santa's best elves are male--and Tanta is a striking example of a strong female elf with a distinct personality. Santa Claus is Comin' to Town is an early example of an animated TV special that unfolds the origin story of Santa Claus and the traditions of Christmas. As the story goes, Tanta Kringle takes in the orphan child and raises him among the elves where he learns to make toys.

Eventually Kris Kringle grows up and develops a distribution process for the elf-made toys. When he crosses paths with the tyrant Burgermeister Meisterburger who has outlawed toys in his village, Kringle disguises his identity by adopting the name Santa Claus. Tanta isn't just Santa's sidekick, she's also a strong maternal figure to the man known world-wide for making children happy.

Even the North Pole's toy shop isn't exempt from the loud-mouthed, know-it-all bosses that we have all faced.  This is the same guy that makes Hermey--the elf that doesn't want to make toys but would rather be a dentist--feel like such a misfit that he runs away from Christmas Town. When he's not managing the toy shop, the elf boss is directing the elf choir and orchestra.  He may be a bully but that elf knows how to conduct a good performance.


Another outstanding elf in this 1964 animated TV special is the tall elf with glasses. In the video clip above, he's the one that sings the line "We don't like to brag..." I also like the elf with the sunglasses hitching up the team of reindeer to Santa's sleigh.

Everyone's favorite elf is Hermey--even if he doesn't want to be like the other toymaker elves. Rudolph with his red shiny nose and Hermey with his desire to be a dentist leave the North Pole seeking their destinies elsewhere. Rudolph's nose turns out to be a value to Santa Claus when a blinding snowstorm threatens to ground his sleigh. But if you'll remember, it is Hermey's skill at dentistry that allows Rudolph (and his family) to escape from the clutches of the Abominable Snow Monster. So Hermey is as much of a hero at the end of the story as anyone. Maybe Hermey's inspiring story should earn him his own Christmas song as well?

Do you have a favorite elf from Rankin/Bass animation that I didn't mention?  Please make sure to check out the other essays about TV Sidekicks in the Classic Film & TV Café blogathon.