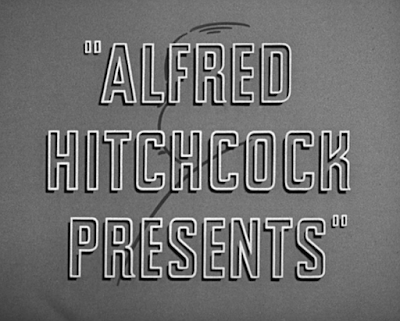 Last March, I shared about the 1960 Christmas episode of The Twilight Zone and it reminded me of the first season episode of Alfred Hitchcock Presents. 1955's "Santa Claus and the 10th Avenue Kid" is a classic Christmas TV episode that also starts off from a place of cynicism and bitterness. However, just like "Night of the Meek" this episode too ends on a hope-filled note in the full bloom of the holiday spirit. Are you familiar with this Christmas episode of Alfred Hitchcock Presents?


The series' theme tune is unforgettable. It is from "Funeral March of a Marionette" by French composer Charles Gounod.


In "Santa Claus and the 10th Avenue Kid," viewers meet career criminal Stretch Sears after his release from prison as he visits his parole officer. His parole officer Mr. Chambers introduces him to an employment counselor Miss Webster who works in the office. She is an optimistic person who believes she can help rehabilitate Mr. Sears. Miss Webster has gotten him a job at a local department store to help him acquire skills to invest in his future. She reminds the aging Sears that he'll end up returning to prison (maybe for the rest of his life) if he doesn't try harder to take advantage of the opportunities they offer him. But in voice-over narration we hear Sears' dark and pessimistic attitude about his chances of going straight.

When Sears reports for work at the department store, he sees that he's been assigned duty as the store Santa Claus. Not exactly the role he would have chosen for himself, Stretch decides to pursue the path of least resistance and goes along with it.


Sure enough, on his first day of work, Sears is caught stuffing silver serving trays under his Santa Claus suit. (The implication is that he was stealing store merchandise). Sears talks his way out of the awkward theft situation and begins visiting with the children in line to talk to Santa Claus.


The store has instructed him to push certain toys in inventory that they need to sell this holiday season. He's also supposed to take notes on what each child asks for--and help the parents with the list of what to buy. The already bitter Sears is disappointed in the role of the modern Santa Claus.


Most of the children are typical kids filled with the innocent excitement of the holiday. Several of them are a bit frightened of the scruffy Sears and his version of Santa Claus. However, one child stands out. He's a wise guy--already certain that Santa won't bring him what he wants for Christmas. Sears asks him what he'd like and he replies that he'd like the expensive toy jet plane hanging on display overhead. But the kid admits he doesn't believe in Santa Claus anyway. This little one has Sears' attention.


To help keep him from temptation, Miss Webster collects Sears' paycheck and deposits it straight into the bank for him. She also picks him up after work each day to drive him to the men's shelter. She reminds him how much she believes in him and hopes he enjoys his work. Sears bristles under the restraint and control. The cynical man knows all this manipulating won't keep him from doing what comes naturally to him.


Sears continues his job as the department store Santa Claus. The children step up to sit on his lap, he writes down what each one wants, and he hands the note to their parents. What a racket!

Eventually the wise guy returns to the toy department and Sears exchanges a few more words with him. Sears recognizes what the kid is up to--and asks him to unload the pockets from his oversized coat. Sure enough, the kid was stealing toys. Sears hears himself warning the kid about the future with the same words Miss Webster used to describe his own limited future. Sears asks him why he doesn't believe in Santa Claus but the kid remarks that people in his neighborhood don't get gifts at Christmas. The boy admits he dreams of becoming a pilot when he grows up but this feels too far fetched to believe in. The kid tells Santa that if he's really Santa, he'll bring him the expensive jet plane toy and leave it under his Christmas tree at home--and gives him his address on 10th avenue.

On Christmas Eve, his last day at work, Sears continues to think about the kid. Recognizing that he was the same type of disappointed child when he was young, Sears considers what he could have achieved differently in his life if he had believed in Santa Claus at that age. Would he have grown up to become a career criminal? On his way out of work, Sears removes the jet plane toy from the store display and secrets it into a sack. Sears breaks into the apartment on 10th avenue and stashes the expensive toy inside. When he leaves the building, he sees his parole officer and the police are waiting to arrest him.

At the police station, Miss Webster vouches for Sears. She explains to the police that she had confiscated his paychecks and surely he wants to pay for the "borrowed" toy. He'll also return the stolen Santa suit. Miss Webster convinces the police that this Santa is worth believing in. It's a happy ending for both Sears and the kid who come to believe in Santa Claus and find redemption. It's a potentially dark story that ends with hope and optimism. Very Christmas-y, indeed.

Don't worry--this episode isn't too sugary sweet. Alfred Hitchcock's appearances in the episode's opening and closing are still pretty dark.  As he introduces the story, we see him bricking up the chimney. He explains he's also loosened the upper bricks to collapse if anyone tries to enter the chimney to come into his home. He's tired of Santa Claus tracking soot from the chimney into his home each year! In the closing, we see that the chimney bricks have indeed collapsed but Hitch says he's going to rescue him! It's a happy ending for everyone, I guess.


Do you see the similarities between this story and The Twilight Zone Christmas episode? Both feature world weary men that work as department store Santas. Both men find redemption in the spirit of the season. Both stories also acknowledge the reality that decades ago, stores often employed down-on-their-luck men to work as temporary help during holiday time as store Santas. (Remember the drunk Santa that Kris Kringle replaces at the start of Miracle on 34th Street? That's another example, as well.) In both The Twilight Zone and Alfred Hitchcock Presents episodes, these hardened scruffy men earn their second chances with hearts of gold. Can we expect nothing less than a happy ending?