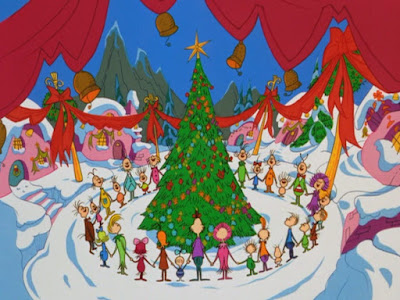 When the Whos start singing at the beginning of Dr. Seuss' How the Grinch Stole Christmas! (the original animated TV special from 1966). Their rendition of “Welcome, Christmas” followed immediately by “Trim Up the Tree” just make me instantly feel like it’s Christmastime. 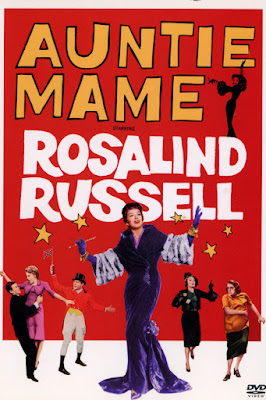 There are so many but I never fail to be moved by the entire not-quite-Christmas-but-we’ll-make-it-Christmas scene in Auntie Mame (not strictly speaking a Christmas movie but as so many of us feel, if it has a Christmas scene, it’s a Christmas movie!)…especially when Beau invites Mame out and she declines, saying she is going to have a celebration with "my little family.” Christmas is about the family, whatever form it may take--and unconventional Mame of course has formed a unique family around her, even though it was unplanned.

Here I have to choose the song “The Lord’s Bright Blessing” in Mr. Magoo’s Christmas Carol. No, not the part about razzeleberry dressing (although that’s fun and quanit), but the line “we’ll have a Christmas far more glorious than grand."  The entire song captures the essence of A Christmas Carol, about having a merry Christmas even if you have very little…or nothing… "as long as we're together, heart to hand."

This one's easy. I know a lot of people have an affection for it, but I find The Polar Express so creepy. I’m not sure why a good director like Robert Zemeckis is so attracted to that motion capture process. And in case you're wondering if I saw his version of A Christmas Carol with Jim Carrey, the answer is no.

I am tempted to say, like David Hofstede, John-Boy Walton, for the same reason as David's: John-Boy is the embodiment of the writer, or at least the in progress writer. (Plus I bear a certain resemblance to John-Boy.) But instead I'll cheat and choose two characters:  Lucy Carmichael and Vivian Bagley from The Lucy Show episode, "A Christmas Together.”  I can truly relate to how both Lucy and Viv are so dedicated to their holiday traditions because I too have strong opinions on the “best” way to celebrate Christmas—although I also am fascinated by and interested in how others celebrate too, and Mrs. Carmichael and Mrs. Bagley are not. But at the end of the episode Lucy and Viv are inspired by their own children to put their differences aside and combine their efforts, as symbolized by the two Christmas trees they join together to form one.