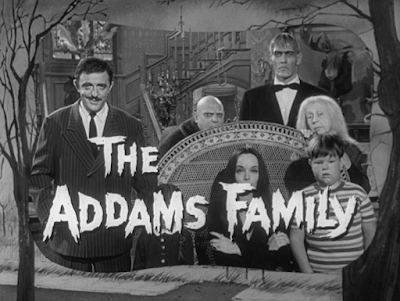 For Halloween this year, I thought I'd re-visit the classic 60s TV series The Addams Family, but I want to go down on record as saying that this series is good to watch year round. I wrote about the 1965 episode "Christmas with the Addams Family" quite a few years ago but I thought I'd expand the discussion and add more photos. This family may be creepy and kooky, mysterious and spooky--but the Addams Family knows how to do Christmas. Is this classic Christmas episode an important part of your annual viewing?


Later Morticia and Gomez explain to Uncle Fester about the children's concerns for Santa's existence. Afraid Puglsey and Wednesday's hearts may be broken if something delays Santa, the adults agree to provide back-up--just in case Santa can't make it tonight. Uncle Fester is recruited to wear a Santa costume to help keep the children's spirits up.

Several hours into Christmas Eve, Santa Claus still hasn't made an appearance. Gomez and Morticia worry about Fester--where could he be? The children are growing concerned that Santa isn't coming and the family tries to console them. Desperate to keep the children's belief in Santa alive, each of them individually sets out to get a Santa suit.

First, Gomez taps on the upstairs window where the children are. They let Santa in the house and he gives them exactly what they wished for: a Marie Antoinette doll and a bow & arrow. The children are happy to meet Santa Claus! He dashes out the window only for there to be a knock at the door--it's another Santa. The children notice this one resembles and sounds like Grandmama. She also gives them a Marie Antoinette doll and a bow & arrow, expresses her holiday greetings, and then leaves the children.

Wanting to see if Santa has left anything else under the Christmas tree, Pugsley and Wednesday go downstairs to the living room. There they encounter another Santa who lovingly gives them another doll and bow & arrow set, and scurries away. With their arms full of toys, the children remark about how they recognize this Santa too. Wednesday explains how she so easily recognizes Lurch through his Santa Claus suit: "I could tell by his smile." Despite the obvious deceptions, Wednesday and Pugsley agree to play along with the adults' game.

Next, they are confronted by Cousin Itt dressed as Santa who also gifts them a doll and bow & arrow, followed by their mother offering them another doll and bow & arrow. With their arms full of dolls and bows & arrows, the Santas gather together and the children acknowledge how lucky they are to have such a wonderful family. With that, Uncle Fester finally drops down the chimney--the living room now has six Santa Clauses!!

Each of the Santas didn't know the others were planning on visiting Pugsley and Wednesday but they're happy that Fester has finally arrived. Suddenly, there's a commotion behind them and their attention is drawn to the family Christmas tree.

In the blink of an eye, the real Santa Claus has come and left them more Christmas presents under the tree! There was no need to provide back-up for Santa after all. In the end, Fester says he returned several of the bow & arrow sets to exchange for a chemistry set for the children. Viewers see the plaster fall from the ceiling on Fester, Morticia, and Gomez after Pugsley makes his own gun powder.

But this episode offers one more treat. The whole family gathers together to sing "We Wish You a Merry Christmas," breaking the fourth wall to offer their holiday greetings to TV viewers. The Addamses might be "altogether ooky"--but they've got the right Christmas spirit.

What's your favorite 60s TV family Christmas episode? Feel free to share it in the comments below.