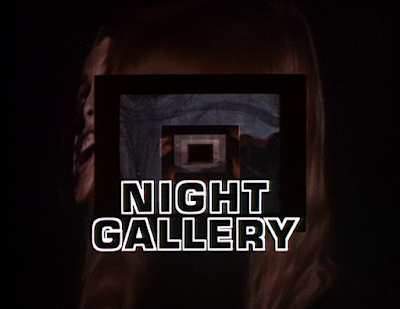 Known for its themes on the supernatural and the macabre, Rod Serling's Night Gallery doesn't disappoint in the 2nd season holiday episode "The Messiah on Mott Street." The story refers to both Hanukkah and Christmas. Much like the holiday episodes of The Twilight Zone and Alfred Hitchcock Presents, this seasonal offering ends on a happy note too.


In "The Messiah on Mott Street," the elderly Abraham Goldman has fallen ill and his condition weakens towards pneumonia with each passing day. The old man is a Jewish immigrant living in a tenement in the ghetto. His physician Dr. Levine warns him that he needs to be hospitalized but the old man refuses to leave his home. Goldman is the sole caretaker of his nine year-old grandson Mikey and he fears the outcome of placing the boy in state-controlled foster care while he seeks treatment in the hospital.


The doctor warns Goldman that if he waits a few more days before considering further treatment, he may not live long enough to change his mind. But Abraham is a man of faith. The old man believes that God looks after those in the tenement, a belief that the poor are not forgotten by their Maker. He reassures Mikey that the Messiah will come to take care of him. Mikey believes in the comforting words and beliefs of his grandfather.

Another glimmer of hope to which Abraham clings is a letter he's received from his wealthy brother--a successful farmer in California--who is selling his farm to retire. After the sale of the farm, the brother promises to send money as re-payment to Abraham for a loan from many years ago. Abraham says that when he receives the money, he'll pay his friend Dr. Levine for coming to his home and treating him. He also hopes there will be enough left over to help Mikey and himself live more comfortably (and leave the ghetto).

When Dr. Levine leaves Goldman's apartment, he meets a social worker outside in the hallway. Levine asks about Mikey's future if the old man should die, and about Abraham's next of kin. The social worker reveals that Abraham's brother is a senile old man living in a retirement home in California. There is no money or estate coming that will benefit Abraham or Mikey.

However strong in faith, Abraham and his grandson are shaken when a shadow falls over the old man as his condition worsens. Mikey fears it's The Angel of Death but Abraham insists it's The Messiah.  The young boy feels like he must do something to help his grandfather and so he heads outside the apartment to look for help. Mikey seeks The Messiah he's heard his grandfather describe as the One who will lift them up and save them from their desperate struggle.

Mikey encounters several people on the cold December streets. It's Christmas Eve so Mickey speaks with a bell-ringing, charity-collecting Santa Claus on the corner. Still looking for The Messiah, Mikey also addresses a doomsday preacher warning sinners about the punishing wrath of God.

Neither of these men reflect the nurturing love and warmth as described by his grandfather for The Messiah. However, one stranger does match the description! And, Mikey grabs him by the hand and leads him to his home.

Back at the apartment, Mikey and the stranger are greeted by the police--and soon Dr. Levine arrives. The old man's condition has worsened. Abraham has fallen unconscious, his condition is too fragile and he can't be moved to the hospital. Everyone fears he may not survive the night. The stranger introduces himself to Dr. Levine as Mr. Buckner. Buckner is a caring person who wishes there was something he could do. Dr. Levine explains that there's little anything anyone can do--the next few hours are critical for the old man. He'll either live or die. Levine discusses the shadowy space between medical science and faith, between cynicism and purity of heart. Mikey is convinced The Messiah will make things better but the two grown men don't know what the future holds.

Like we expect from a spooky, supernatural episode of Night Gallery, a strong wind blows the windows and doors open in the apartment. Fearing the worst, Dr. Levine and Mikey rush into the old man's bedroom to check on his condition. Buckner is no longer with them.

A miracle has occurred--Abraham sits up in bed and feels well. Goldman describes having a nightmare that The Angel of Death had visited him and promised to return at midnight but it's midnight now (Christmas Eve has become Christmas day) and Abraham feels better. Clearly, the danger has passed. Mikey and Levine express their concern and relief--and they share with the old man their experiences of the past few hours which mysteriously leave out the stranger's appearance in their lives. Next, there's a knock at the door.

A letter carrier has a special delivery letter for Abraham Goldman. Mikey signs for the letter and gives it to his grandfather to open. The envelope contains a letter and check from Abraham's brother in California. Just as promised, money has arrived to help them improve their lives. Viewers are left wondering: Are the Angel of Death and The Messiah the same? And, was Buckner The Messiah after all?

While this summary of the Night Gallery episode may read like a typical holiday story, I want to assure you it's anything but. The story is a bit frightening--with talk of The Angel of Death and shadows falling across the sick man's bed. The supernatural elements feel more spooky and unknowable than how holiday miracles are typically portrayed on television. However, the warmth and meaning resonate as satisfyingly as any other holiday TV episode. Whether viewers are celebrating Hanukkah or Christmas, the story's meaning is the same: family, faith, and hope are the reasons for our celebrations.