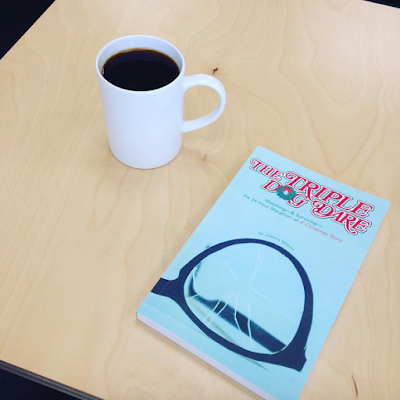 Need a taste from my new book Triple Dog Dare: Watching--& Surviving--the 24-Hour Marathon of A Christmas Story? Someone suggested I share an excerpt from the book. Okay, here goes--I picked several paragraphs from Chapter 6 from my ongoing conversation speculating on the popularity of the 1983 movie and marathon.

"A Christmas Story seems to make a good marathon at least in part because there are several different story threads woven together to make one movie. We usually focus on Ralphie’s quest for the Red Ryder BB gun but there’s also the added tales which include the Old Man’s “major award,” Flick’s tongue stuck to the frozen pole and his rescue, Ralphie’s experiences downtown and standing in line to talk to Santa Claus, the avoidance and confrontation with bully Scut Farkus, the intruding Bumpus hounds, decoding Little Orphan Annie’s secret message, the various fantasies from Ralphie’s imagination, and more. Fans of writer Jean Shepherd’s work recognize that these memorable scenes are derived from five of his short stories. All five of the short stories were first published in Playboy Magazine during the 1960s. If this is before your time, you may be unaware that Playboy Magazine, although most often associated with titillating nude photos of women, was also a gentlemen’s magazine that published essays and interviews of significant literary appeal.

The short story about Ralphie’s quest for the Red Ryder BB gun is entitled “Duel in the Snow, Or Red Ryder Nails the Cleveland Street Kid.” The other short stories adapted for the movie are “The Counterfeit Secret Circle Member Gets The Message, Or The Asp Strikes Again,” “My Old Man and the Lascivious Special Award That Heralded the Birth of Pop Art,” “Grover Dill and the Tasmanian Devil,” and “The Grandstand Passion Play of Delbert and the Bumpus Hounds.” Four of the stories were eventually published in the book In God We Trust, All Others Pay Cash in 1966. The fifth was published in the 1971 collection of Shepherd’s essays entitled Wanda Hickey’s Night of Golden Memories. All five short stories adapted for the movie have since been collected into one book entitled A Christmas Story: The Book That Inspired the Hilarious Classic Film.

The titles of Shepherd’s stories seem reminiscent of American humorist literature and tall tales, much like “The Celebrated Jumping Frog of Calaveras County” written by Mark Twain. With the addition of Shepherd’s voice as the narrator, delivering lines like “What happened next was a family controversy for years…” and “Even something as monumental as ‘The Scut Farkus Affair’ as it came to be known…” remind viewers of pulp fiction, serialized stories and comic books. In fact, his style is not unlike the serials referred to in the movie, including Red Ryder and Little Orphan Annie. The rich textures that Shepherd crafted grab readers of his stories and viewers of the movie.

While A Christmas Story is adapted from numerous individual stories woven together, individually the storylines work to develop the characters, placing them in different adventures, even if they unfold toward several resolutions instead of just one. Because of this serialized structure, it is easy for viewers to focus in and out of the movie. It doesn’t matter where you are in the movie’s plot, viewers can return their attention to the TV to enjoy a scene or two, or twenty or thirty more minutes of the plot. The order doesn’t really matter.

This structure also makes it easy to marathon-watch it, allowing Christmas revelers to leave the room, come back, hold several conversations throughout the movie, and still easily return to and follow the action within the story lines. I think this in part explains the success and popularity of the A Christmas Story marathon with families across the country. Watching the marathon is an easy Christmas Eve activity while we socialize, reminisce, eat, and open gifts." 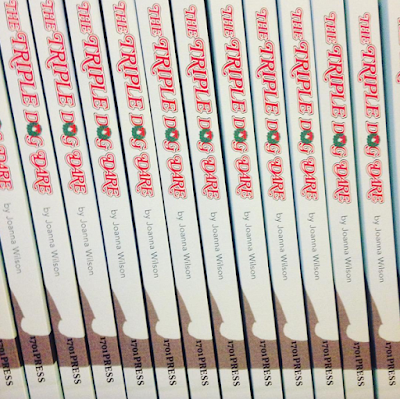 I'm also pleased to see that readers have begun sharing their reactions to the book. A glowing review came from Daniel Budnik on Amazon:

"I, myself, would never be able to sit still for 24 hours of A Christmas Story. (Actually, probably any movie.) Luckily, Joanna did it for us. She's written several other books on Christmas TV/ movies so she knows what she's talking about and she (mostly) seems to know what she's getting into. The book is broken up into individual viewings of the film as she makes it through the night and the next day, gets visits from friends, exchanges gifts with her boyfriend and has a run-in with a bar of soap. When I got the book, I was a little worried about what the format would be like. Would reading the book get as repetitive as watching the same movie over and over? Well, it isn't. Not at all. Joanna has prepared herself a series of questions, which she asks herself throughout the viewing. So, as the movie is on in the background (not only for her but in the book itself), she is constantly riffing all around the movie. Telling stories, dwelling on Christmas entertainment, keeping her mind busy (and us entertained) as she makes it through the marathon. And it's all very interesting, well-written and fun to read. I read through the book very quickly. This Christmas, I plan on reading it again. Recommended wholeheartedly."

Thanks Daniel. Triple Dog Dare is on sale now at http://1701Press.com and wherever books are sold.
Posted by Joanna at 1:06 PM