Last month over the holidays, I found myself re-watching the the movies Ghostbusters, Ghostbusters II, and the re-boot released in 2016. Who ever remembers that 1989's Ghostbusters II is set during the Christmas and New Year’s  holidays? Christmas trees, wreaths, lights, and decorations fill the background, and the goodwill from New Yorkers singing “Auld Lang Syne” at midnight on New Year’s Eve help combat the evil slime attacking the art museum. Despite this, the movie doesn't feel like a holiday story.  That's okay because the cartoon series The Real Ghostbusters created its own unforgettable yuletide tale. Let me jog your memory.


The first season episode "X-mas Marks the Spot" sees the four Ghostbusters driving to upstate New York to work on Christmas Eve. Driving through a snowstorm, the crew inadvertently passes through a portal which transports them to Victorian England! Before they can figure out where they are and how they got there, the four men witness an old man being harassed by several ghosts. The Ghostbusters know what to do and capture the three ghosts.

The Ghostbusters are pleased to have offered relief to the old man named Ebenezer Scrooge from the frightening spirits. However, Peter thinks that this situation seems all too familiar to him. Returning to their car, the Ghostbusters drive back to New York City feeling like they've done a good job to help out an old man. But once they are back in the city, everything seems to have changed.

People on the street aren't filled with the Christmas spirit any longer. The guys notice a best-selling book in a nearby store window. It is "A Christmas Humbug" written by the man they just met on their journey. Back at the firehouse, they notice that Janine has even lost her holiday cheer. What has happened while they were gone?


The men talk it out and realize that they must have passed through a timeslip earlier in the evening. By capturing the ghosts and altering the past, they have prevented Ebenezer Scrooge from experiencing his moral transformation--which has eliminated the influence of the book "A Christmas Carol" from inspiring future generations! The Ghostbusters have messed up and they have to correct the mistake before it's too late.

Egon must physically enter the Ecto-Containment Unit to retrieve the Ghosts of Christmas Past, Present, and Future before they are permanently lost. This difficult endeavor requires the assistance of Janine and Slimer. Hopefully, Egon will be able to accomplish this tricky mission and be able to come back out of the containment unit or he may be stuck there forever.

Meanwhile, Peter, Ray, and Winston travel back to upstate New York hoping to locate the timeslip once again and meet up with Scrooge. If Egon isn't able to retrieve the Ghosts of Christmas Past, Present, and Future, the Ghostbusters will have to fill-in to help transform Scrooge themselves. You know where this is going, right? The three men take it upon themselves to haunt Scrooge.

Regular readers of the blog know how much I love the TV tradition of characters gaslighting someone into experiencing a Dickens-style conversion. I've written about these holiday episodes several times before, including the 1967's Bewitched, 1976's Six Million Dollar Man, and 1980's Dukes of Hazzard. This story device is a popular one and has been used many times throughout TV's history. Here is just another example.


In the end, the Ghostbusters are able to set the world right again. Peter even discovers his own Christmas spirit after seeing what he lost when the world was without its holiday cheer. With a nod to this episode's storybook character inspirations, Winston remarks "I always thought it [A Christmas Carol] was just a story. Makes you wonder what else might be real?" And the Ghostbusters react to hearing Santa Claus laugh.

It's funny to see these fictional characters question the nature of Ebenezer Scrooge and Santa Claus. Why not, right? But what really makes me giggle is how these characters never quite draw the correct distinction between the fictional Ebenezer Scrooge and the real-life writer Charles Dickens. Where exactly did the Ghostbusters travel to when they slipped through the portal in the snow on their way to upstate New York? I guess I won't pull a thread to unravel a story that also contains Ecto-Containment Units, a helpful Slimer, and timeslips.

However, I'm impressed by the attempt to create a new holiday story. This not-so-simple episode strikes me as ambitious for a 1980s children's cartoon series. It's not a straightforward or simple adaptation of "A Christmas Carol"--it's far more creative than that. I admire it for its originality while keeping to the series' own known created universe. 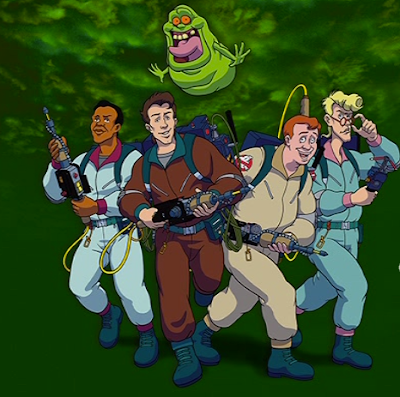 You can watch this episode on the recently re-released DVD of the series The Real Ghostbusters, Vol. 1. Do you have a favorite Christmas episode, besides the ones listed above, in which a character attempts to gaslight another with a Dickens-style conversion? Feel free to leave your comments below.