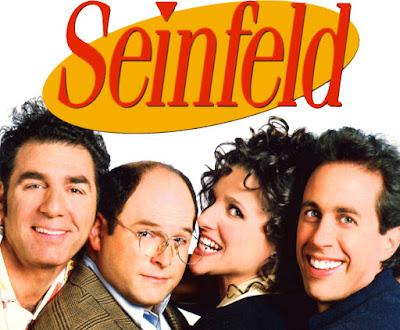 2017 marks the 20th anniversary of the Festivus episode of Seinfeld. You remember what Festivus is, correct? It's an alternative holiday to Christmas, invented by George Costanza's father. It's an annual tradition that seems to torture and humiliate George, but one that seems silly and absurd to everyone else. Let's look back at the Festivus holiday as it's described in an episode of Seinfeld, and consider its place in holiday TV history.

Festivus is introduced in the ninth season episode "The Strike." If you're a fan of the series, you'll remember that this particular episode is packed tightly with story. The episode begins with George, Elaine, and Jerry at Tim Whatley's Hanukkah party. Whatley is a recurring character on Seinfeld, played by actor Bryan Cranston--who later went on to play the father Hal on Malcolm in the Middle and the infamous Walter White in Breaking Bad. It's fun to see Cranston playing this smaller role before his career skyrocketed.

At the party, Elaine receives unwanted attention from a man she mockingly nicknames "Denim Vest." When he asks for a date, Elaine generously offers him a fake phone number hoping to never hear from him again. Another great casting choice is actor/comedian Kevin McDonald as Denim Vest. McDonald is one of the principal cast members of the Canadian comedy troupe Kids in the Hall. He also plays Pastor Dave on That 70s Show, and appears in several of its Christmas episodes (including the 2001 Christmas episode I wrote about HERE).

It is at Tim Whatley's party that Jerry meets Gwen, a woman he dates throughout this episode, one he ends up referring to as "Two-Face." Jerry eventually discovers that poor Gwen looks unattractive--almost like another person--when she is seen in uneven lighting. The running gag through the episode is watching Jerry trying to spend time with her in well-lighted places.

Later, George is opening his mail in front of Jerry and Elaine while hanging out at the diner. George opens a greeting card from Tim Whately and learns that Tim has made a donation in George's name to a children's charity. Selfish George is angered by this gift. However, later it inspires him to create a fake charity--the Human Fund--to make holiday gift donations on behalf of his co-workers. Viewers see George gleefully passing out holiday cards to co-workers with the promise of a donation made to the Human Fund in their name. Only George could be pleased with himself to pretend to give to a fake charity. However, his trick backfires when George's boss Mr. Kruger gives him a $20,000 check to pass on to the Human Fund.


While continuing to open his mail in front of his friends, Jerry sees George open a Festivus greeting card from his father Frank Costanza. Jerry makes fun of George for being raised with Festivus, an obvious sore spot for George. For Elaine's benefit, Festivus is explained for all to hear.

When George was young, his father created the holiday as an alternative to the commercial and religious aspects of Christmas. Instead of a Christmas tree, the Costanzas put up an aluminum pole. The holiday also included Feats of Strength, a physical competition that--as George adds--usually resulted in him crying. Later in the episode, we hear that Festivus includes the Airing of Grievances--a time when everyone gathers around the dinner table to express their disappointment with others. Adding to George's humiliation, the annual Festivus celebration is usually audio tape recorded. No wonder George hates Festivus!


In this episode, Kramer is notified that the twelve year workers' strike he's involved in with H&H Bagels is finally over. The workers will finally receive the $5.35 per hour wage they asked for. (The joke is that $5.35 is finally the minimum wage twelve years later). But Kramer is eager to go back to work--and the manager at the bagel shop needs holiday help so he welcomes Kramer behind the counter.


Meanwhile, Elaine learns she's lost her Atomic Sub card, a points system card which will allow her a free sub with just one more purchase. She fears she's given the card to Denim Vest with her fake phone number on it. Although she doesn't want to see him again, she insists on getting the card back for her free sub. She calls the fake number and discovers that the number rings an off-track betting company. She goes to the OTB and asks the creepy guys that work there if anyone has called asking for Elaine Benes. Wanting to re-connect with Denim Vest but afraid to give the sleazy guys her actual phone number, Elaine creates a relay by asking them to call Kramer's bagel shop.

George's father Frank Costanza invites the whole gang to celebrate Festivus with him on Dec. 23rd. Elaine, Jerry, and Kramer can't wait to see this ridiculous celebration for themselves. Kramer is angered when the bagel shop won't give him the 23rd off, so he vandalizes the shop's steam valve to attempt to halt bagel production. His inept sabotage doesn't bring about the desired effect--the shop can still make bagels but the building fills with warm, humid air. Elaine, who is spending time at the bagel shop waiting for Denim Vest to call so she can retrieve her Atomic Sub card, experiences a steam bath--her hair becomes heavy and wet, and her make-up runs down her face. She looks much like Alice Cooper! When Denim Vest finally calls and agrees to meet her at the bagel shop, she looks like a fright, and he's no longer interested in dating her!

George's boss Mr. Kruger does a little research and discovers that the Human Fund, the charity George claimed to donate money to on behalf of everyone in the office, is a fake. George tries to escape blame for his offense by claiming that he felt awkward in the workplace since he was raised with Festivus, not Christmas like everyone else. When Mr. Kruger pushes him about the made-up holiday, George invites him to his father's house to prove that Festivus is indeed real.


Finally, at the Costanzas' home, the friends gather around the dinner table to celebrate Festivus. Not only is Kruger there, but Kramer has brought with him the two sleazy guys from OTB since they are looking for Elaine. Kramer is confident that bringing the OTB employees together with Elaine is a "Festivus Miracle!" Frank Costanza begins the Festivus celebration by the annual airing of grievances--which seems to mean he's complaining about and insulting each person at the table. Next, George's humiliation continues when his father begins the ritual of the feats of strength insisting that George physically prove himself in front of all the guests. (The silly humor also comes from the mystery of what physical feat the incompetent George must actually perform).

The silly and absurd Festivus--an alternative to Christmas--is certainly one that has captured TV viewers' imagination and funny bone. Here we are 20 years later and we're still laughing about it. Festivus isn't just limited to a TV episode reference--it has impacted the culture so much so that there is Festivus merchandise embraced by TV fans everywhere. There are Festivus t-shirts, aluminum poles, bobblehead dolls, toys, and more. Two decades ago, Ben & Jerry's made a Festivus ice cream as well. (They retired the flavor name after only a few short years but kept the seasonal ice cream on the market under the name Gingerbread Cookie. The flavor is now retired. Yeah--I was a big fan!). But it's quite easy to find Festivus references on-line and on social media each year on Dec. 23rd, even after 20 years!

If you watch and listen to the bonus commentary on the DVD release of the ninth season episode of "The Strike," you can hear Seinfeld writer Dan O'Keefe explain how Festivus is based on his own childhood experiences of his father making up a holiday alternative to Christmas. I believe O'Keefe explains that the pole was a fictional addition to the TV story but nearly everything else was authentic to his family experience!? Can you imagine celebrating Festivus as a child? Yeah, me neither.

As unique as Festivus is, it is not the first (or last) alternative holiday to Christmas on television. Childrens' TV programs sometimes create parallel holidays within the fictional, imaginative world of the series, ones that look and sound an awful lot like Christmas but are NOT Christmas. My favorites include PB & J Otter's 1999 episode "The Ice Moose," The Marvelous Misadventures of Flapjack 2009 episode "Low Tidings," and the 2008 episode "Hey, Hey It's Knishmas" from the TV series Chowder. Other newly created holidays on TV try to combine Christmas with Hanukkah, or fashion an alternative celebration that honors all year-end celebrations rather than focus on only one. I'm certain the examples of alternative or parallel holiday celebrations are more numerous than you might guess. If there's enough interest, I can explore a few examples in upcoming discussions. Feel free to let me know what you think in the comments below. 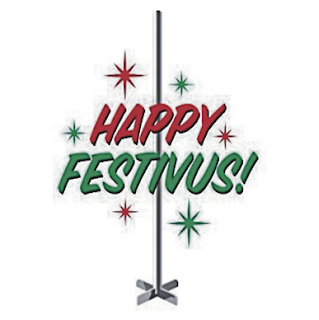 Joanna Wilson is a TV researcher and book author specializing in Christmas entertainment. More about the episodes mentioned here can be found in her book "Tis the Season TV: the Encyclopedia of Christmas-themed Episodes, Specials, and Made-for-TV Movies." Her latest book "Triple Dog Dare: Watching--& Surviving--the 24-Hour Marathon of A Christmas Story" was released in 2016. Her books can be found at the publisher's website: 1701 press.com