After the DegrassiPalooza TV fan convention two weeks ago in Toronto, I headed east to visit Christmas music collector Jeff Fox in Ottawa. Jeff also runs the website Name That Christmas Special.com. As you can imagine, we have a lot in common. Miss my post on DegrassiPalooza? Click HERE to see it again. You may remember that I visited Jeff three years ago--HERE's that post again. Like last time, we spent a good amount of our time together shopping for Christmas music and thrifting. 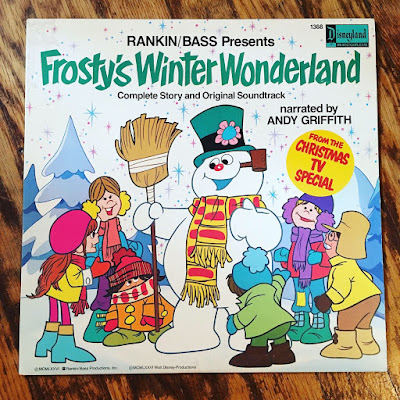 My Christmas record collection of Rankin/Bass soundtracks is nearly complete. I was very excited to acquire 1976's Frosty's Winter Wonderland animated TV special soundtrack. Now all I need is the soundtrack to 1969's Frosty the Snowman. I think I have all the others. I didn't find this one--Jeff was kind enough to know I was looking for it and set it aside for me. Thanks Jeff!


Despite the age and wear on the cover, I'm excited to add this record to my collection. The music is as the cover claims--it's organ and chimes arrangements of holiday favorites but that Hanna-Barbera cover with The Flintstones, Magilla Gorilla, Top Cat, Yogi Bear, Huckleberry Hound, and Snaggle Puss really makes this album a keeper. Thanks again to Jeff for sharing this with me.


Christmas with Robert Shaw conducting The Atlanta Symphony Orchestra and Chorus may not be attractive to every Christmas record collector, but to me it's a nice addition. I just saw an episode of American Masters on PBS about Robert Shaw and he impressed me as an artist. I also know that there's a Christmas TV special on PBS with Shaw conducting the orchestra and chorus as well. This recorded performance IS NOT from that TV special but still, I wanted this recording. When I saw that the track listings included "Introduction, March and Shepherd's Dance" from the opera Amahl and the Night Visitors, I knew this used LP was coming home with me.

This is the record that I'm most excited about. I'm so pleased with myself for finding it! This is the soundtrack to the 1963 TV special The Story of Christmas with Tennessee Ernie Ford. The cover even includes a still from the animated segment in the TV special about the Nativity. The 18-minute, minimally animated segment was created by Eyvind Earle, an accomplished artist who also worked for Walt Disney on Fantasia, Sleeping Beauty, Peter Pan, and other noteworthy projects. The soundtrack also includes Ford sharing the story "Little Gray Donkey," a memorable Christmas story written by Charles Tazewell. (Tazewell is also known for writing "The Littlest Angel.") Have you seen the 1963 TV special? It has been officially released on DVD by the estate of Ford. It's classic Christmas on TV and may be most attractive to people looking for more religious content in their entertainment.

I also brought home numerous Christmas CDs. Four of them can be seen above. Top left is the 2011 re-issue of The Muppets: A Red and Green Christmas. I'm excited that one of the bonus tracks is a song from the 2008 TV special A Muppets Christmas: Letters to Santa. Whheee! Top right is the 1993 Christmas album by Boyz II Men. Their single "Snow" appears in the 1993 episode “Twas the Night Before Christening" on the comedy The Fresh Prince of Bel-Air. Bottom right is Medieval Carols recorded by a chorus in England. I was interested in this because the chorus performs "Riu riu chiu" a Spanish carol with gorgeous harmonies. You may have heard the song before--it was also performed by The Monkees in their 1967 Christmas episode. And, bottom left is the album of Christmas in Vienna IV from 1997 featuring Placido Domingo, Ying Huang, and Michael Bolton. The original concert aired as a Christmas TV special on PBS.


Spending time in used record and thrift stores throughout Ottawa, I couldn't help but stumble across other items and media attractive to Christmas collectors. We found a bag of plastic figures, each about 3 inches tall, of the California Raisins. These characters came to life in TV commercials and the 1987 TV special Claymation Christmas Celebration. The stop-motion holiday special was animated by the claymation master Will Vinton. The California Raisins appear in the final segment, singing "Rudolph the Red-Nose Reindeer" in their own unique R&B/Motown style. It was the 80s--a lot of weird stuff happened!


I also picked up a hardbound storybook and a paperback novelization of The Grinch from the 2000 theatrical release movie.


We found a cookbook filled with recipes inspired by the 1995 theatrical release film Home for the Holidays, directed by Jodie Foster. Remember this Thanksgiving movie? It's not exactly a feel-good movie. I love that a cookbook was made to promote it.


Jeff shared with me a 1995 Christmas novelization from the TV sitcom Full House featuring the middle sister Stephanie. It pairs nicely with the Michelle book I already own.

I'm also pleased to add this paperback book to my Christmas book collection: Peter Griffin's Guide to the Holidays. The Family Guy holiday book pairs nicely with The Simpsons Christmas book already in my collection.

My luggage was FULL coming back into the States. Hilariously, the bag of plastic California Raisins set off alarms at TSA screening in the airport. They inspected my suitcase and pulled out the raisins--I saw the inspector start laughing when she realized what had been red-flagged as "suspicious." They immediately sent me right through!

What's in your Christmas music collection? Got any Christmas LPs or CDs with a film or TV tie-in?

Joanna Wilson is a TV researcher and book author specializing in Christmas entertainment. More about the TV programs mentioned on this website can be found in her book "Tis the Season TV: the Encyclopedia of Christmas-themed Episodes, Specials, and Made-for-TV Movies." Her most recent book "Triple Dog Dare: Watching--& Surviving--the 24-Hour Marathon of A Christmas Story" was released in 2016. Her books can be found at the publisher's website: 1701 press.com