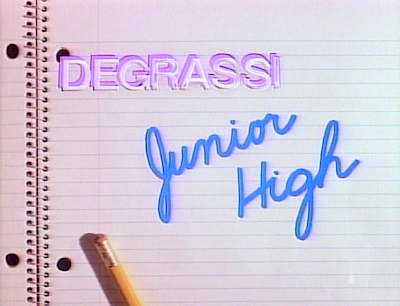 These days I'm quite busy finalizing the updated, 2nd edition of the encyclopedia Tis the Season TV for its eventual publication next year (2020). I may not be writing as many essays here on the website but I'm still working hard on Christmas TV history.

Today I decided to take a break from the encyclopedia and share my thoughts on the third season Christmas episode of Degrassi Junior High entitled "Season's Greetings." Are you familiar with the Degrassi franchise? Degrassi Junior High ran for three seasons and the characters continued for two more seasons as Degrassi High. The series was a joint venture between the Canadian CBC and American PBS (WGBH in Boston). If you've never seen it before, Degrassi is a fun mix of what feels like an Afterschool Special with a teen drama. It's a one-of-a-kind, soap-style (its stories unfold across episodes and season) series that takes on topical issues for its teen characters. Most of the action on the series takes place on school grounds. Degrassi Junior High and High originally ran from 1987-91. In 2001, the franchise started again (on cable TV in the United States) as Degrassi: The Next Generation and ran for 14 season, and then Degrassi: Next Class for four more seasons, ending in 2017. I have to confess that I'm a huge Degrassi fan and have watched the entire run of the series. (I've seen it all except the precursor Kids of Degrassi Street).

In the Degrassi Junior High third season episode "Season's Greetings," there are several storylines. The primary story is a conflict between Arthur and Yick. It's the last day of school before the holiday break and best friends Arthur and Yick want to exchange Christmas gifts. But Yick makes a comment about Arthur's family's recent windfall of money (Arthur's mother won more than a million dollars in the lottery at the start of season 3) revealing his insecurity about exchanging gifts with someone who is more wealthy. Arthur is tired of Yick's comments about his family's money and the two teens begin fighting.

Arthur's younger cousin Dorothy overhears the boys arguing and tries to mediate. She reminds them about the past experiences they've shared in the two years since they met. What follows is a clip show of Arthur and Yick segments from past episodes as the boys flashback to highlights of their past adventures together.

Viewers see clips from:
--S1E1 "Kiss Me Steph" the episode in which Yick meets Arthur when he releases him from a locked janitor's closet on the first day of school.
--S1E3 "The Experiment" in which Yick turns in Arthur's sister's school paper to test the fairness of teacher Mr. Raditch's grading.
--S1E7 "The Best Laid Plans" in which Yick acquires the porn video "Swamp Sex Robots."
--S1E10 "Smoke Screen" in which Arthur accidentally breaks Yick's heirloom vase.
--S1E11 "It's Late" in which Arthur helps Yick ask Melanie out on a date for the first time.
--S2E3 "Great Expectations" in which Yick encourages Arthur to telephone talk-radio show host Dr. Sally (Sue Johanson) to ask questions about his maturing body.

In another storyline in "Season's Greetings," we see Spike in the cafeteria with her friends worrying about passing her exams. She explains since she's become a teen mother, most of her time is taken up caring for her baby and she doesn't have much time left for studying. Spike's friends remember how she was kicked out of school during her pregnancy and know how important it is for her to return and finish her education. They encourage her to hang in there despite her frustration. (Didn't I mention that this series resembles an Afterschool Special?)

Maya and Kathleen share a brief scene in this episode too. Kathleen asks Maya about her Christmas plans and Maya explains that she celebrates Hanukkah. Both of these characters will have more significant storylines later in the run of the series and in Degrassi High. (Maya will share more about her feelings of being a teen in a wheelchair. Kathleen will experience her mother's alcoholism, develop anorexia, and years later she'll deal with a violent boyfriend).


In a minor storyline, the school furnace is broken and the heat is making everyone uncomfortable. The school maintenance worker Louella is trying to fix it but she needs a part she requested months ago in order to get the furnace working properly.

Joey and Snake feel awkward around their friend Wheels. His parents were recently killed when a drunk driver hit their vehicle and Wheels is still grieving. Knowing he's having a hard time adjusting to living with his grandparents, Joey invites Wheels to come to his home for Christmas dinner.

After she's beckoned to the principal's office, Spike returns to the cafeteria with her baby Emma. This is the first time most of her friends have ever seen or met her baby. While the teens fuss over the infant, the baby's father Shane is seated several tables over. Spike has kept Shane away from the baby--he's never even seen Emma before! He knows he's not welcome to gather with the others but he wants to meet his daughter for the first time.

With some convincing, Spike eventually allows Shane to see his daughter--she even allows him to hold the baby for the first time. This is actually a very big moment in the on-going series and an emotional point in the storyline about Spike's pregnancy and her motherhood which has been unfolding for two seasons. Degrassi series fans know that this is a pivotal moment too. The 1988 Christmas episode is Emma's first time on-screen. The character of Emma would eventually go on to inform Degrassi: The Next Generation--as the twelve year-old girl enters junior high herself!

The episode's story ends with Arthur and Yick reminding themselves about the good memories they've shared. They finally agree to exchange gifts. It turns out that Yick's fears of receiving an intimidating gift from his newly rich friend were unfounded--he unwraps an eyeglasses strap. It's an inexpensive gift and one he desperately needs.