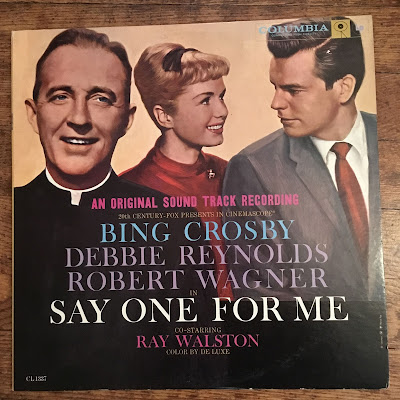 The 1959 movie Say One for Me stars Bing Crosby, Debbie Reynolds, Robert Wagner, Sebastian Cabot, and Ray Walston. Crosby plays Father Conroy, a priest character playing off his popular earlier role as Father O'Malley in both Going My Way and The Bells of St. Mary's. In Say One for Me, Father Conroy's parish is filled with show business entertainers. One of Father Conroy’s favorite parishoners is Holly LeMaise (Debbie Reynolds) who ends up falling in love with a singing-and-dancing wolf named Tony (Robert Wagner).

On the movie's soundtrack is “The Secret of Christmas,” a song written for the film by Sammy Cahn and James Van Heusen. Below is a clip from the movie with Crosby as Father Conroy performing it. It should be noted that the song was re-recorded with a more complex arrangement, additional vocals and orchestration for the official soundtrack.

The 1968 movie Yours, Mine and Ours includes a significant Christmas scene but is not usually categorized as a holiday film. Lucille Ball plays Helen North, a widow with eight children, who falls in love with Frank Beardsley, a widower with ten children, played by Henry Fonda. I've seen this movie on TV more times than I can count--it's truly comfort TV for me. The holiday scene in the movie shows the recently blended North and Beardsley family spending their first Christmas together. Helen and Frank have to make sure they have gifts under the tree for all eighteen children! Frank stays up all night hidden inside a closet assembling bicycles for several of the youngest children. On Christmas morning, little Phillip North, played by child actor Eric Shea, hops upon his new bicycle only to have it fall apart underneath him! This holiday scene also includes an emotional moment between Helen and Frank when she encourages him to accept his commission to return to work with the Navy--a job he wanted to do but felt he should turn down for the sake of the family. Yeah, I kinda have this movie memorized.

On the official soundtrack release, there is a track entitled "Christmas." It is a variation of the main theme music that includes the sound of sleigh bells. Everything about this movie makes me feel nostalgic--even if it's not a Christmas movie!

Fans of singer/actor Doris Day have probably seen the 1951 movie On Moonlight Bay that also stars Gordon MacRae. The musical takes place in a small town in Indiana during the early part of the twentieth century, based on the stories written by Booth Tarkington. I don't consider the movie a holiday film, however there is a notable Christmas musical moment. Near the middle of the film, Day sings “Christmas Story” during a scene that takes place at Christmas time.  It is written by Pauline Walsh, with strains of the traditional carol “Silent Night” heard throughout.

The same song appears in the 1953 episode "Christmas" on Make Room for Daddy (also known as The Danny Thomas Show) sung by Danny Thomas. Check out the clip below to see and hear Thomas perform it:

1978's forgotten, theatrical release movie If Ever I See You Again is set during Christmas. The story follows successful jingle writer and music composer Bob Morrison as he looks to reconnect with a former love interest named Jennifer. Although his music career has its ups and downs, Bob hopes Jennifer who now works as a painter will be willing to commit to a relationship.

The movie includes quite a bit of music and the soundtrack was released as a double album including two versions of “Christmas Song.” Morrison is played by Joe Brooks--who also directed the movie and wrote the music for it. Jennifer is played by Shelley Hack (before she played Tiffany Welles on TV's Charlie's Angels). This movie also includes a young Danielle Brisbois as Bob’s daughter Amy, and Peter Billingsley in a very small role at a children's Christmas party scene, near the end of the movie. (Take note: this movie was made five years before child actor Billingsley starred in the movie A Christmas Story).

Joe Brooks is best remembered for writing the Oscar and Grammy winning song "You Light Up My Life," made popular by singer Debby Boone. (She sings on this soundtrack too). One of the reasons this movie is forgotten (it's also less than mediocre) is because Brooks was at the center of a scandal. I'll let you satisfy your own curiosity--here's a link to his wiki page.

Moving on, Hanna-Barbera's animated film Heidi's Song was released into theaters in 1982. This K-Tel album is a story soundtrack. Heidi's Song is a musical adaptation of the literary favorite Heidi by author Johanna Spyri. Many of the film and TV adaptations of the story include Christmas scenes--remember the Christmas scene in the 1937 Shirley Temple version? The horrible governess Fraulein Rottenmeier breaks the precious snowglobe given as a gift to the orphan Heidi.

Back to Heidi's Song, this movie too includes a Christmas scene, a holiday spent tending to her injured grandfather. The accompanying story soundtrack includes the song "A Christmas-y Day" on Side One. The album back cover specifies that Margery Gray voices Heidi's speaking voice, but Sandi Hall sings Heidi's vocals on this song.

I always love hearing your comments about my growing Christmas music collection so please feel free to comment below. Here are some links to some more of the records and CDs in my collection:


Joanna Wilson is a TV researcher and book author specializing in Christmas entertainment. More about the TV programs mentioned on this website can be found in her book "Tis the Season TV: the Encyclopedia of Christmas-themed Episodes, Specials, and Made-for-TV Movies." Her latest book "Triple Dog Dare: Watching--& Surviving--the 24-Hour Marathon of A Christmas Story" was released in 2016. She is currently updating and expanding the encyclopedia for a 2020 release. Her books can be found at the publisher's website: 1701 press.com