John Denver & the Muppets: A Christmas Together (1979) 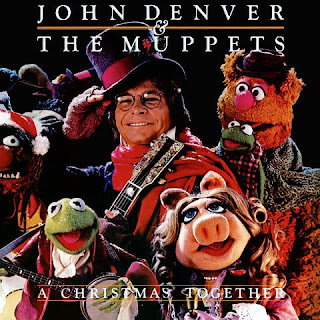 As Earth Day draws near, I find myself reflecting on environmentalist/singer/songwriter John Denver. Since I'm a Christmas TV writer, I'm frequently asked about the 1979 special John Denver & the Muppets: A Christmas Together. The Muppets seem just as popular now as ever while many others fondly remember this TV favorite from their childhoods. A soundtrack from the TV special has been available for years. However, most people bring it up in order to ask me if it is on DVD yet. Sadly, it is not. But I can speculate why it is not and why it may never be released.

Most people don't realize that is has never been released to consumers in any format before. So it's not just a waiting game for it to be updated from a previous VHS or laser disc package.

But I think the biggest headache must be the music rights and licensing--a problem that plagues other DVD releases. I've even seen programs released onto DVD that have been edited to eliminate musical performances where rights couldn't be cleared. My first thought goes to the TV series Hullabaloo which on DVD is missing large chunks. But this is so common, there are many, many examples. A Christmas Together has several obvious music rights issues. If you've seen it recently (there are bootlegs floating around and segments are viewable on YouTube), you may notice that there are songs in the TV special that aren't on the soundtrack. (There are also songs on the album that are not in the TV special.) Three songs in the TV special are from musical theater. These songs must surely come with their own unique set of licensing problems:

'Pleasure of Your Company' and 'Camaraderie' are both from the 1974 stage production of The Good Companions. The original music and lyrics are by Andre Previn and Johnny Mercer. John Denver sings 'Pleasure of Your Company' as he enters the set of the snow-covered city square after the Muppets argue about the script. This song appears in the beginning as the second musical number. 'Camaraderie' is sung by the toy wooden soldiers in the production number Denver shares with Miss Piggy.
'I Will Wait for You' is from the 1964 French musical The Umbrellas of Cherbourg. Miss Piggy sings this in the role of Fifi the French doll in the same production number she shares with Denver who plays a wooden soldier.
The song 'It's In Every One of Us' was originally written by music legend Cliff Richard while two more songs, 'A Baby Just Like You' and the spoken word 'Alfie the Christmas Tree,' are credited to John Denver. 'The Christmas Wish' is credit to Danny Allen Wheetman while 'Have Yourself a Merry Little Christmas' belongs to Hugh Martin and Ralph Blane.

I mention all this because these rights must be paid in order for this TV special to be released onto DVD. Now consider who would do it? John Denver tragically passed on in 1997. His estate may not have the desire or the resources for such an undertaking. There appears to be no plans to release any of Denver's other TV projects on DVD either.

And Disney now owns the Muppets. Disney, I'm sure, has no interest in investing capital into paying the licensing rights to someone else's creativity. Unfortunately, I can't imagine who else would be interested or motivated in making this Christmas TV classic available on the market despite consumer interest.

Like a lot of people who grew up in the 1970s, I'd love to see A Christmas Together made available--in its entirety. Nothing would make me happier than to have this blog post made irrelevant by Disney or whomever. I'd be the first one in line to buy my copy of the DVD.
Posted by Joanna at 10:23 PM

Email ThisBlogThis!Share to TwitterShare to FacebookShare to Pinterest
Labels: John Denver, the Muppets