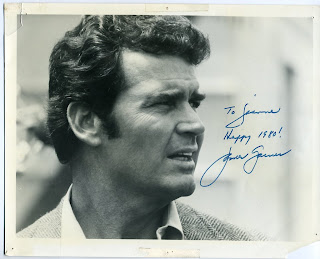 Happy Birthday James Garner. I've been the hugest fan of this actor my whole life. If you've read this blog before, you'll probably already know this about me. I love, love, love The Rockford Files and Maverick. This is one of the several autographed pics I have of him from when I belonged to the James Garner Fan Club. Yes, the inscription reads 'To Joanne Happy 1980!' I never cared that he got my name wrong. Close enough. The tape and holes in the corners of this pic come from the years I had it hanging on my walls--in college dorm rooms and the many apartments I've had across the country. Enough about me.

Sadly, I know of no Christmas-themed Rockford Files or Maverick episodes. However, Garner is in the 1999 holiday movie, One Special Night. The story begins at Thanksgiving when Catherine (Julie Andrews) offers Robert (Garner) a ride home in the blizzard from a nursing home. Catherine had been there visiting the room where her now deceased husband had spent his final months and Robert was in the facility keeping company with his wife who is suffering from Alzheimers. Their journey home in the storm is treacherous and their car slides off the road, forcing them to seek shelter in an abandoned cabin in the woods. Though they don’t get along at first, they come to share one special night in that cabin, safe and warm by the fire. They promise to meet again but circumstances interfere. That is, until Christmas Eve when Catherine is called in to the hospital where she works to help deliver a premature baby--Robert’s grandchild.
Fans of the 1964 movie The Americanization of Emily will appreciate the romantic reunion of Garner and Andrews in this film.

Garner also appears in the 2006 film based on a best-selling book, The Ultimate Gift which also stars the amazing cast: Abigail Breslin, Drew Fuller, Lee Meriwether and Bill Cobbs. Here, Garner plays a billionaire that dies and leaves a special request for an estranged grandson in his estate. The request offers the self-centered party boy, Jason (Fuller) a chance to face a string of challenges to earn an undisclosed ‘ultimate gift.’ Jason soon learns that these challenges are more character building exercises than financial gains but he transforms himself to rise to each challenge in a way that would impress his deceased grandfather. Along the way, Jason befriends a death-obsessed little girl, Emily (Breslin) and her mother who see him for the person that he is and not the former spoiled, rich boy. Jason’s character building exercises from his deceased grandfather are further enhanced when he learns that little Emily is death-obsessed because she’s dying from leukemia. There’s a wonderful Christmas scene where Jason insists on making Emily’s perfect day wish come true by providing a day of horseback riding with her mother. Watching his best friend struggle with a terminal illness leaves Jason with a new perspective on the value of money and what to do with his grandfather’s estate. Meriwether and Cobbs appear as two lawyers representing the billionaire's estate. This film incorporates a significant Christmas scene and the theme of second chances, a very powerful and common Christmas theme in movies.

On TV, Garner also appears in the Christmas episode of the final season of 8 Simple Rules... as the grandfather character. Don't miss Garner donning a Santa suit just to please C.J., played by David Spade. This episode is entitled 'A Very C.J. Christmas.'