In a recent review of my book, The Christmas TV Companion, the reviewer commented about my discussion of the unusual appearance of the Devil as a character in Mexican-made Christmas stories. Since that book was written, I have discovered ANOTHER amazing holiday film that includes the Devil: Los 3 Reyes Magos from 1976. 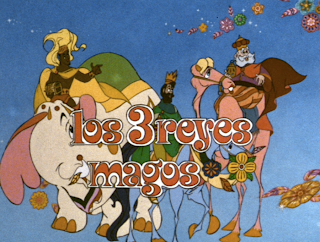 This Mexican-made feature length animated movie tells the familiar story of the Nativity from the perspective of the Three Wise Men. As the three kings Melchior, Gaspar and Balthazar make the journey to Bethlehem, they are challenged by Murcio, a minion of the Devil who wants to prevent them from spreading the glorious news of the birth of the child who will be King. After Murcio fails to stop them, the Devil himself posing as Prince Olbaid, tries to trick the kings and stop them from reaching Bethlehem.

Whether you watch this classic on the Epiphany, otherwise known as Three Kings Day in January, or at Christmas time, this is a rare treat. With amazing visuals and action/adventure sequences, this animated tale is unlike any other. There are gorgeous highly stylized segments of Mary and Joseph being turned away from inns on their journey to Bethlehem. These segments may contain little animation but they are musical portions with fantastic imagery. These musical segments serve as a break between action sequences, cross-cutting between Mary and Joseph's journey and the Three Kings travels from their distant lands. 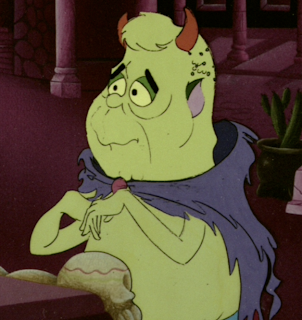 Murcio tries to cancel the Christmas celebration at Bethlehem (not Whoville).

The Devil’s minion, Murcio has more than a passing resemblance to the Grinch. Some times he takes on the appearance of a bat but he also has horns like a demon. He's not grumpy like the Grinch but he does undergo a transformation at the end of the story at the stable in Bethlehem.

The Devil himself, also known as Prince Olbaid (that’s Diablo spelled backwards) looks like the lead singer in a glam band. 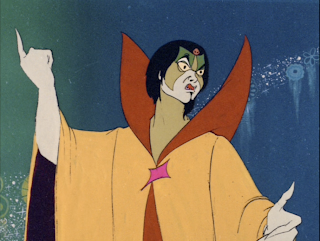 My favorite action sequences appear in the middle when King Melchoir while traveling through a canyon on horseback is threatened by a snake sent by Murcio. The constrictor ends up wrestling with Melchior’s horse before being stopped by a knife in his throat. And, King Balthazar traveling through the African jungles atop an elephant is beckoned into a swamp by a beautiful singing mermaid. Balthazar follows her into the water where she is transformed into seaweed and pulls the king to the water’s depths where he has to survive a hungry crocodile.

This is Part Five which contains the scene with King Melchior and his horse battling the snake!

In Part Six, King Balthazar battles the mermaid and a crocodile!
This one-of-a-kind story has a 1970s Saturday morning cartoon feeling about it. But the action sequences are not like most other holiday animation. The closing credits claim that this is the first animated feature film made in Latin America. And, the writer/producer/director of this holiday fantasy, Adolfo Torres Portillo, is also credited with the story for the 1959 Mexican classic film Santa Claus which also features the Devil in its story.

I watched Los 3 Reyes Magos as a rental from Netflix--which has subtitles for non-spanish speakers like myself. However, the whole thing is available for viewing on Youtube in ten parts.
Posted by Joanna at 6:43 PM