The Adventures of Sherlock Holmes (1984) 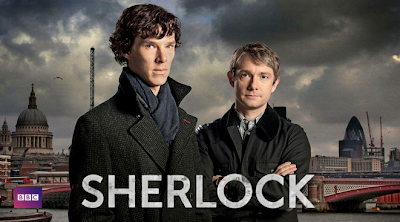 Have you been following the most recent TV adaptation of Sir Arthur Conan Doyle's literary detective Sherlock Holmes on PBS?  The British series, simply entitled Sherlock, just completed its second series with a mind-blowing season finalé.  If you're quick, you can watch it on PBS.org (it expires June 19th).  The first season is currently streaming on Netflix.  The first installment in this second series contains Christmas scenes however I wouldn't consider it a Christmas-themed episode.  Thanks to J.A. Morris from Holiday Film Reviews for starting this conversation. 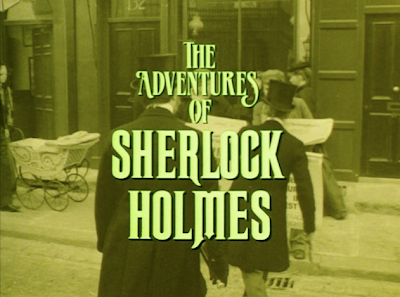 But there are other Christmas-themed Sherlock Holmes stories.  The first one that comes to mind is the 1984 episode "The Blue Carbuncle" from The Adventures of Sherlock Holmes starring Jeremy Brett as the title character.


Holmes is asked by a neighbor, Mr. Peterson, to help him find the man who has dropped his hat and a Christmas goose during an attempted mugging.  When the goose carcass is found to contain a recently stolen precious blue gem, Holmes’ interest is further piqued.

The best part of this episode is watching Holmes visually examine the hat and instantly know the details of the owner's personality, lifestyle and habits!  It's a quintessential Sherlock scene.  And, of course, his partner Watson is both amazed and skeptical.

When the hat's owner is found, Sherlock quickly ascertains that he is not the thief of the Blue Carbuncle.  Now Holmes sets off the trace the source of the Christmas goose and goes looking for the food co-op, of sorts, that distributed the goose.


As expected, Watson and Holmes eventually outwit the thief of the Blue Carbuncle, and Holmes demonstrates the spirit of the season by forgiving the repentant thief.

This Christmas TV episode isn't one merely inspired by the great literary detective.  In fact, this Christmas tale is significant because it is an adaptation of a short story originally penned by Arthur Conan Doyle first published in 1892.  How cool is that?

TV junkies like myself may get a kick out seeing actor Frank Mills in the role of Peterson.  Mills also appeared in the much beloved, 1990s British detective series Hetty Wainthropp Investigates as Frank Wainthropp.  I'm the hugest fan of that gentle series--I admire Hetty's courage and desire to help people by using the common sense and wisdom she's earned throughout her long life.  She's one sassy senior, brought to life by actress Patricia Routledge.  I wish Hetty Wainthropp Investigates had a Christmas episode!


Back to The Adventures of Sherlock Holmes:  This Christmas episode "The Blue Carbuncle" also gives viewers another opportunity to immerse themselves in Victorian-era London at Christmas time.  Charles Dickens may have inspired us to be sentimental about nineteenth-century England at the holidays but this story allows TV viewers to indulge in the era from another literary standpoint.

"The Blue Carbuncle" episode from The Adventures of Sherlock Holmes is currently streaming on Netflix.  What's your favorite version of Sherlock Holmes?  Are you tempted to watch the new one coming this fall entitled Elementary with Lucy Liu as a female Watson?
Posted by Joanna at 12:37 PM