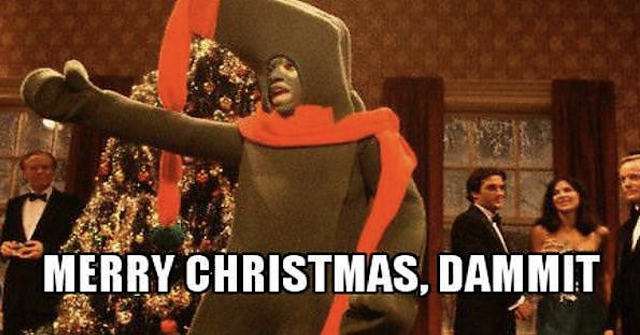 “Hallmark’s A Gumby Christmas: Merry Christmas, Dammit!”
This sketch is studded with stars, real and impersonated. And it’s THICK with quotable lines. My favorite is Joe Piscopo’s Frank Sinatra Xmas medley. It’s a tribute to cartoon greats. Piscopo’s Frank was a national treasure, and his salty take on “Silent Night” makes me laugh every time: “Round that virgin chick / She had a kid / He grew up to be famous / You all know what he did!”

I like all the Christmas everything. Cookies. Movies. Whadda ya got? But now that my kids are both teenagers, it’s hard to get them to sit down with the rest of the family for any length of time. So in recent years, the family DXmas viewing has shifted from All Christmas All Day to Christmas episodes, because they’re short, and they’re an easy way for everybody to get together and have a bite-sized holiday experience. Once everybody’s in bed, I have a canon of movies I enjoy, like In Bruges and Scrooged.

The Community season 3 Christmas episode is a musical extravaganza. It’s all brilliant. Some of the songs depend on you knowing who the characters are. But a few stand alone as devastating satire, like “Teach Me How to Understand Christmas,” which sends up tunes about infantilized sexuality, like “Santa Baby.”

I’ll stop evangelizing for Community a minute. Instead, I can’t wait to hear what you think about my new discoveries for the year: The new Documentary Now episode “Original Cast Album: Co-op” has a couple swell Christmas tunes. And episode 4 from season 1 of Hardy Bucks, a show that’s on also on Netflix now. It’s like an Irish version of Trailer Park Boys. Speaking of Trailer Park Boys, I forget: Have you seen the Trailer Park Boys Xmas Special: Dope and Liquor Edition Yet?

Christmas programming has proliferated in an amazing way. Look at what Hallmark is doing. I like the trend: if you want to create magic art, you need a lot of output to get to the great material. So the more Christmas shows there are, the more great stuff we’ll get.