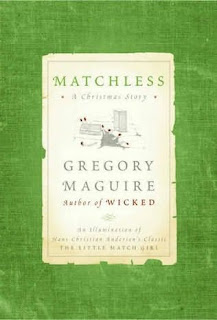 I've had to do some research on The Little Match Girl, the 19th century story by Danish writer Hans Christian Andersen. There are several filmed adaptations that are so different from one another that I've found myself having to read a translation of the original story in order to recognize the original elements. I had to do this with E.T.A. Hoffmann's The Nutcracker as well. Most people don't know that the original text is quite different than the story told within the ballet. After having watched so many different versions of the ballet, I had to read the original story in order to discern between the different adaptations. So I currently have several translations of the Andersen story checked out from the library to read.

One of the books I grabbed is a brand new book--just released this year--by Gregory Maguire, the well-known writer of fairy tale adaptations. His most notable book is Wicked, the re-interpretation of Baum's The Wizard of Oz that has gone on to inspire the popular Broadway musical production. I know that Maguire's new book Matchless is also a re-interpretation of The Little Match Girl and so not really relevant to my research but I was curious anyway. In Maguire's Note at the end of the book he mentions something that was meaningful to me. This very sad story about the little girl selling matches in the street that dies in the cold isn't a story that connects well with 21st century audiences. Modern audiences have a different lens through which to view the welfare of children as well as the poor. I'm not sure what the point of Andersen's original story is except perhaps that the little one's suffering ends with her death. I admire Maguire's intention with this new re-interpretation in trying to find a way to construct new meanings for modern readers.

I think that was the same intent behind my favorite animated version, from 1990, also entitled The Little Match Girl. Made by Michel Sporn, this version is narrated by actor F. Murray Abraham and aired on HBO. Not only are the images beautiful but the story is given a new life as it's re-imagined as a stage production with a social/political message similar to Dickens that we all share an obligation to help one another. Without giving too much away, I'll add that it is a grand effort to use a familiar story from literature to remind us of human values that never go out of style.
Posted by Joanna at 9:14 PM