It is with sadness that we say our final goodbye to actor Peter Falk.  There are many tributes to Falk's long career, many focusing on his iconic TV detective Columbo, the Runyon-esque tough guys he played on the big screen, or even his much-beloved appearance in Wim Wenders' arthouse classic Wings of Desire.

But here, on my blog, I want to acknowledge his appearances in the trilogy of Christmas TV movies in which he plays Max, the underestimated angel that works to bring people together for the holiday. 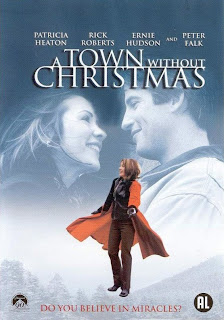 The first film in the series is 2001's A Town Without Christmas which also stars Patricia Heaton.

Heaton plays a TV news reporter who's sent to cover a story where a letter to Santa is discovered at a small town post office that sparks attention all over the country--a letter written by a child whose life is in jeopardy! 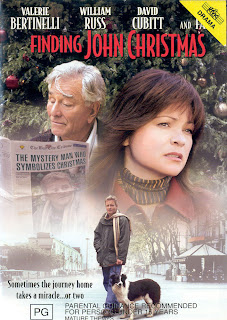 The second in the series of three films is 2003's Finding John Christmas which stars Valerie Bertinelli.  In this story, a photojournalist snaps a photo of an anonymous man, down on his luck at the holiday, which runs in the local newspaper.

Kathleen, played by Bertinelli, recognizes the photo as her long lost brother and contacts the journalist.  The public is moved by the photo in the newspaper and there’s a movement to find the stranger in the photo labeled ‘John Christmas.'  Unfortunately, he doesn’t want to be found. 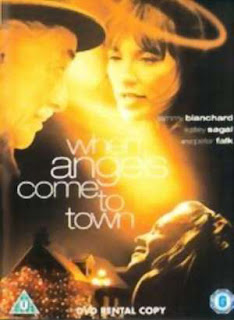 And the third TV movie is 2004's When Angels Come to Town which stars Katey Sagal.  This story centers on two people in a small town who both need help this Christmas.  The angel Max attempts to help each of them but another angel, Jo, played by Sagal, believes that Max's efforts are mistaken.

All three movies are uplifting Christmas stories that include the angel Max who usually takes on several guises to provide the main characters the support and encouragement they need to do the right thing.  There's usually a touch of magic and the feeling of fate's hand guiding people in the right direction.  Falk's Max is eccentric, all-knowing and persistent--not unlike Columbo.  It's a real treat to see his familiar face and his way of doing what he does best--in these feel-good holiday stories.

The cable network Universal HD will be airing all three Peter Falk Christmas TV movies starting this Thursday and repeating them each several times through Saturday.  If you don't get Universal HD network, don't worry.  These three movies still regularly air each December.
Posted by Joanna at 11:36 PM