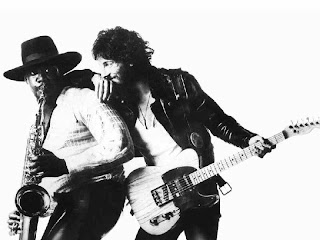 Like many others, I've been touched by the recent passing of musician/actor Clarence Clemons.  The first image that comes to mind when I think of the tenor saxophonist, is that one with him and Bruce Springsteen from the Born to Run album cover.  My big sister had a Bruce Springsteen and the E Street Band concert t-shirt that I used to "borrow" and wear during my high school years.

But the Big Man did more than just provide the most amazing, rockin' sax accompaniment to back up The Boss.  What's on my mind today is Clemons' appearance on the Christmas episode of the TV police drama Nash Bridges.


The second season episode, "25 Hours of Christmas," has several different storylines.  Nash and his partner Joe, played by Don Johnson and Cheech Marin, are investigating a department store armed robbery that didn't go off as the robbers planned.  Joe has taken Nash's much-beloved vintage car to get it detailed for him as a present for Christmas but the 'Cuda is stolen in transit.  Nash accidentally switches the gifts he purchased for his ex-wife and his current girlfriend which causes some unexpected reactions from the women in his life.  And, Angel, a mentally unstable local citizen tells Nash that he is Nash's guardian angel this Christmas.  This is an unwelcome distraction to the police investigations and activity at the San Francisco station house.

But more relevantly, this episode also includes Clarence Clemons, near the end, as a local businessman and musician named Big Barry.  In this episode, he is here to give Nash the car tires he needs and to ask for help getting his property out of an evidence locker.  After this Big Barry attends the police department Christmas party.  Dressed in a Santa Claus suit,  Joe joins Barry to entertain the party guests, performing the holiday song "Santa Claus is Coming to Town."  Clemons' role as Big Barry is brief here but the performance is a substantial one as the music extends into Clemons playing "Have Yourself a Merry Little Christmas" as well.

This Christmas episode of Nash Bridges is available for viewing on DVD.  It's on Season 2, disc 3 for Netflix users.  How lucky we are to have Clemons' musical work and his appearances in movies and films recorded.  In this way, he can live forever.

Hopefully, this 1996 episode has stimulated your appetite for more 1990s Christmas entertainments because throughout the whole month of July, I'll be featuring just that.  I'm hosting a dozen guest bloggers and I'll even jump in there to write about a few 1990s movies and programs myself.  So make sure you stop back during July to check out what others are saying about our favorite 1990s Christmas movies, specials and TV episodes.  It's still not too late to join in on the fun if you'd like to guest blog during July--email me ASAP with a title if you're interested.
Posted by Joanna at 5:22 PM