Have you checked out what other cool bloggers are writing about during the month of October?  Please feel free to click on the Cryptkeeper link on the righthand side of this blog to go to a HUGE list of other blogs. It's a Halloween blog hop!  hosted by CountdowntoHalloween.com 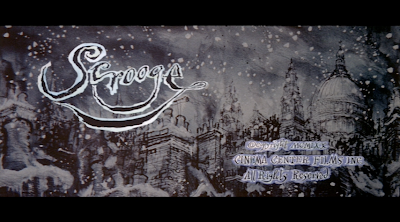 Have you ever watched the 1970 British movie musical Scrooge?  With music and lyrics written by Leslie Bricusse, both the score and the song "Thank You Very Much" from this movie were nominated for Academy Awards that year.  The music and lyrics were written by Leslie Bricusse, the same man who went on to write the music for the 1971 movie Willy Wonka and the Chocolate Factory.  Scrooge stars Albert Finney as Ebenezer Scrooge and Alec Guinness as the Ghost of Jacob Marley.


I point out 1970's Scrooge at Halloween because this particular adaptation of the popular Christmas story includes an incredible scene of substantial length.  During his journey with the Ghost of Christmases Yet to Come, Scrooge takes a trip to HELL!

After falling down into the depth of Hell, Scrooge is relieved to see a familiar face: his old friend and business partner, Jacob Marley.  Marley welcomes Scrooge to his final destination (mwuh--hahahaha!) and shows him his office.  He's been given the job as personal clerk to Lucifer!


Marley takes him in his office and warns him about the rats!  He's also been denied heat in his office, just as he denied heat to Cratchit serving as his personal clerk.  (Karma is a bitch).  Next, Scrooge's chains are delivered--they took extra long to forge.


After Scrooge awakens on Christmas morning, he finds he's had a change of heart and sets out to buy a Christmas turkey for the Cratchits before joining his nephew Fred for a meal.

I find this interpretation of Scrooge's journey an interesting one.  (A trip to Hell is not in the original manuscript as written by Charles Dickens).  While I find the frightening imagery and the threat of eternity spent working for Lucifer a thrilling addition to the story, I don't think it fits the point intended by Dickens.  I believe Dickens created Scrooge's transformation as one to be motivated by reciprocity and a recognition that his wealth will do him no good after death.  As if Scrooge learns "you can't take it with you" rather than "for the wages of sin is death."  It's a more subtle turn for Scrooge to recognize and appreciate what good his money can do for others rather than change his mind about his greediness because he fears eternal damnation.  Certainly, Dickens was clever enough to consider writing it that way if he so wanted.  But I think he preferred the more subtle character change.  I think we all do.  Even if it is entertaining to see Scrooge in HELL!

Check it out: Scrooge is available on DVD and is easy to find each December airing on television.
Posted by Joanna at 5:58 PM

Email ThisBlogThis!Share to TwitterShare to FacebookShare to Pinterest
Labels: Scrooge