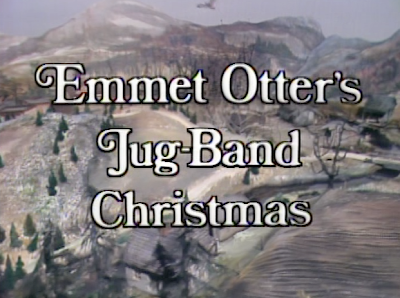 If you've been following along on the blog, you know that I've been reminiscing about some of the best and most interesting adaptations of O. Henry's short story The Gift of the Magi.  So far I've discussed the 1952 film O.Henry's Full House,  the 1978 TV movie The Gift of Love, and a segment within 1999's Mickey's Once Upon a Christmas.  Today's blog post is about another adaptation, 1977's Emmet Otter's Jug-Band Christmas.  This hour-long TV special takes quite a few liberties with the details, however the heart of the original O. Henry story is all there.


Emmet Otter and his widowed ma, Alice Otter, live along the river just outside the town of Waterville.  Emmet does odd jobs and home repairs while his mother takes in laundry as both struggle to earn a living.  When a Christmas Eve talent show in Waterville is announced, both Emmet and Ma Otter think they each stand a chance to win the money and buy the other a Christmas present this year.


However sacrifices are required in order to enter the talent contest.  Emmet will have to poke a hole in his mother’s wash tub in order to have an instrument--a washtub bass--to join his friends performing in a jug band.


Ma will have to hock Emmet’s tool chest at a local pawn shop in order to buy the fabric to make a fancy dress in order to sing in the show.  In the spirit of O.Henry’s classic tale, the otters each surrender a precious possession in the hopes of creating a happy Christmas for the other.


At the talent show, many acts perform and another performer sings the song "Bar-B-Que" before Emmet's jug band!  So the boys quickly come up with another song, substituting "Brothers" into the act.

While Ma's and the jug band's performances are quite popular with the crowd, both acts lose the contest to a rock band calling themselves The Nightmare, performing "River Bottom Nightmare."

Waking home from the talent show on Christmas Eve, Ma and the jug band combine both of their songs and sing "Our World/Brothers" to create a much better song together.  Hearing the beautiful new composition, a local restauranteur hires the act to play every night for money and free food--a better deal than the one-time cash prize of the talent contest!


This is an utterly charming live action TV special created by the genius puppeteers of Jim Henson Productions.  It is not only a Christmas classic but arguably one of the best things TV has to offer.  Not only does it feature the highest quality puppets and character development but amazing detail in the the set design and the creation of this unique environment.  Frogtown Hollow, where the Otter family and their friends live, is awe-inspiring.  Not only do Ma and Emmet row their boat through real water but the fireplaces feature real flames.  The townsfolk are made up of otters, badgers, woodchuck, bullfrogs, fish, snakes, and even a bear--all dressed in many layers of winter clothing to keep warm.  My favorite detail is the life-like water fowl that populate the river that include swimming ducks, a crane, and even flying birds.  Remember, this is all done with puppetry!  Modern fans of Jim Henson's Muppets shouldn't overlook the this earlier production and its overwhelming attention to detail and story.

The memorable music is written by legendary songwriter Paul Williams and includes "The Bathing Suit That Grandma Otter Wore" a song sung by Emmet and his mother in the rowboat at the beginning, "When There Ain't No Hole in the Washtub" sung by Emmet, the foot stomping jug band performance of "Bar-B-Que," the gospel-inspired "Where the River Meets the Sea" sung by Emmet and his mother, Ma’s song "Our World" that she sings in the contest, "Brothers" the jug band's song in the contest,   the heavy metal rock and roll song "River Bottom Nightmare," and "Our World/Brothers" the song that earns the jug band and Ma their gig at the restaurant.


Though this adaptation of The Gift of the Magi reinterprets newlyweds Jim and Della's gift exchange for an otter mother and a son that don't end up exchanging gifts at all, you'll still be pleased with the outcome.  Emmet Otter's Jug-Band Christmas shares a story that at its heart is about love at Christmas time, a story even O.Henry would be pleased with.

If you're as big of fan as I am of this classic TV special, you're sure to remember this song "Bar-B-Que" performed by Emmet and his friends in the jug band, rehearsing for the talent contest in the tree house.  "We're not birds, we're a jug band!"
Posted by Joanna at 5:56 PM