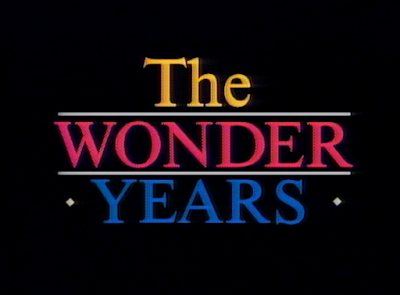 I've been thinking about nostalgia quite a bit lately. When I consider nostalgia, I can't help but be reminded of The Wonder Years--a TV series that aired in the late 80s and early 90s that was set in the late 60s and early 70s. In addition to the setting, the voice-over narration by adult Kevin Arnold looking back and giving commentary on his junior high and high school experiences makes it even more nostalgic. Another layer of nostalgia creeps in when you realize this series first aired 28 years ago. It's no wonder that the Christmas episodes of this series are so moving. Let's look back once again on the second season holiday episode entitled "Christmas" from 1988.

Adult Kevin's narration tells us that this story takes place during Christmas time 1968. Kevin, his siblings Wayne and Karen, and their mother Norma are hard at work trying to convince their father that they want a color TV for Christmas. Jack says that color TVs are very expensive and reminds his family that money "doesn't grow on trees." But each member of the family takes their turn trying to nudge their father closer to getting them what they all want.

In another story line, Kevin is given a small wrapped gift by his dream girl Winnie Cooper.  Surprised by the attention, Kevin wants to reciprocate the gesture. So he lies and says he has a gift for her as well. Kevin explains that he'll drop his gift off at her home later. In the meantime, Kevin spends a great deal of time trying to imagine what her gift means on the junior high romance spectrum.

Kevin is intent on buying Winnie the perfect Christmas gift. At the department store, Kevin annoys the counter sales woman by requesting to smell all the different perfume samples in stock, hoping to identify Winnie's current scent. Then Paul points out the flaw in Kevin's gift idea: why give Winnie the same perfume she already owns? Kevin ends up purchasing a less-than-perfect gift he had passed over earlier--a small snowglobe with a ballerina inside.

On Christmas Eve, the Arnold family is feeling restless as they try to hide their disappointment. Kevin, Karen, Wayne, and Norma have given up on their dream of getting a color TV--and Jack is frustrated by not being able to afford the one gift he knows everyone wants. Norma asks if anyone would like to go caroling around the neighborhood with friends but no one is interested. Karen wants to go out on a date for the evening but her parents make her stay home. Kevin decides to slip out for a few minutes to deliver Winnie's Christmas gift.

Standing in front of her door, Kevin imagines a romantic scene in which the beautiful Winnie expresses her overwhelming gratitude for his gift. Reality awakens him when a stranger opens the Cooper family's front door.

It turns out, a family member is housesitting while the Cooper family is out of town. Winnie and her parents left town for Christmas since this is the first holiday since her older brother Brian was killed in Vietnam. Kevin (and TV viewers) immediately sympathize with the pain and grief the Cooper family must be enduring. Kevin drops off his less-than-perfect gift and slowly returns home.


Kevin dwells in the complicated emotions of knowing that he's spent the previous week worried about what Winnie's gift could mean for their future. He was only concerned about finding the perfect gift to impress her into becoming his girlfriend. And now, he feels guilty and regretful for only thinking of himself. The melancholy song "River" sung by Joni Mitchell that plays under the scene in which Kevin walks home perfectly captures the sadness of the moment.

Closer to home, Kevin finds his family caroling door-to-door in the neighborhood. He joins them in song just as it begins to rain! In keeping with traditional sitcom structure, the play against expectation (it doesn't snow this Christmas Eve) causes the Arnolds to laugh and we're rewarded with a happy ending to this story, despite the heavy emotions just moments before.

This episode is a powerful Christmas story that reminds us about the pain of adolescence and becoming more aware of the world around us. While I don't want to minimize this episode's impact and entertainment value, I do wish to point out a minor flaw. At the episode's start, Kevin and his family are at the local store watching a color TV set that is airing a television variety Christmas special.

We're told this story takes place over Christmas 1968--however the TV set shows the 1969 Christmas installment of The Glen Campbell Goodtime Hour starring Campbell, Cher, Paul Lynde, and more. I suppose it really doesn't matter, but it is a detail that Christmas TV fans may notice.

When you think of Christmas nostalgia, what TV episode comes to your mind?  Feel free to share your comments below.