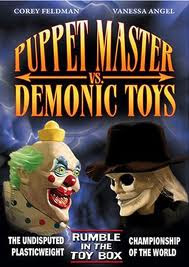 Remember those heady days of the by-gone era: 2004? Yeah, me neither. But I haven't forgotten this movie Puppet Master Vs. Demonic Toys, directed by Ted Nicolaou in 2004. This Syfy Channel original movie is the ninth installment in the campy series of Puppet Master stories. Just before Christmas, Robert Toulon, the great-grandnephew of the previous puppet master, stumbles upon the chemical formula which brings his puppets to life. Through industrial espionage, Sharpe Toys learns of Toulon’s secret and sets out to steal the puppets and end the Toulon family blood line. Sharpe Toys is selling the hottest toy of the holiday season, the animatronic Christmas Pals. The head of this rival toy manufacturer, the evil Erica Sharpe has made a deal with a demon from hell to sell her life-like toys to children all over the world so that on Christmas morning, the demon will be able to use his toy minions to take over the world.

As the countdown to Christmas morning continues, the existence of Toulon’s protective puppets threaten Erica’s plans for world domination. The demonic toys are a trash-talking baby doll, a bloodthirsty teddy bear and a snaggle toothed jack-in-the-box. There’s also a distracting side story, a romance develops between police officer Sgt. Russell and Toulon, which interfers with his focus, allowing the evil toy manufacturer to kidnap Toulon’s teenage daughter, Alex. You know the world is safe from evil toys when former child actor and reality series actor, Corey Feldman is cast as the the lead and hero. Though this movie is awful, you have to stick it through to the end in order to see Baal, Hell’s demon dressed as Santa Claus in the final showdown. Toulon arrives to rescue his daughter and the puppets attack the demonic toys.

With all the adorable and heart-felt Christmas stories about toys and dolls coming to life, this movie really stands out. Not just because these toys are brought to life through virgin’s blood and demonic power but...well, maybe that’s why. Perhaps after seeing this, you’ll watch Toy Story and Jim Henson's The Christmas Toy a little differently. 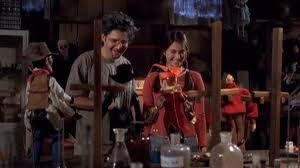