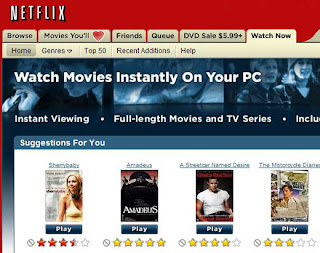 Do you have Netflix? One suggestion for enjoying holiday movies this month is to watch them instantly, streaming on your TV or computer. Netflix has a variety of Christmas movies available to its customers this month through its instant viewing catalog. Of course, you can always rent ANY of its holiday movies through the mail any time of the year--in fact, there's rarely any delay on most Christmas titles in the off season! But I'd like to point out some of the Christmas-themed titles currently available for instant viewing. However, this is not a complete list. There are too many to list them all!

>>>The 2006 mini-series Hogfather is available. It is based on the sci-fi/fantasy book series written by popular author Terry Pratchett. This most unusual story includes the sickle-weilding Death character taking over the role of the Hogfather, a sort of pig Father Christmas as the annual gift-bringer. It must be seen to be believed.

>>>The 1997 re-make of The Christmas Memory, a movie version of Truman Capote's nostalgic short story. This version stars Patty Duke as the frail cousin Sook. However, this adaptation is not as good as the far more rare TV version from 1966 which stars Geraldine Page. But the story is certainly worth it even if it is not the superior adaptation. My favorite line: "Oh my, it's fruitcake weather."

>>>If horrible, campy horror movies are your thing, check out Puppet Master Vs. Demonic Toys. It stars Corey Feldman as the great-grandnephew of the previous puppet master in this ninth installment of the puppet master series of movies. Enough said.

>>>Dog movies were the most popular trend in Christmas movies last year. You can return to your own childhood by watching Benji's Very Own Christmas Story which features the lovable dog from several decades a go.

>>>The 1980 TV movie A Christmas Without Snow is also available. It includes actress Michael Learned in the lead role while she was still starring on the hit TV show The Waltons.

These three titles are Christmas-themed episodes from long-lost TV shows that have slipped into the public domain. Most are installments from dramatic anthology series from the 1950s although 'The Orphan's Christmas' is actually from the childen's pirate series The Adventures of Long John Silver. I love watching these old forgotten TV shows.

Netflix is not the only source to watch holiday-themed programs in July. Don't ever forget your local library. And, it's free!!
Posted by Joanna at 1:18 PM