Set Your DVRs: The Middle's 'Christmas' 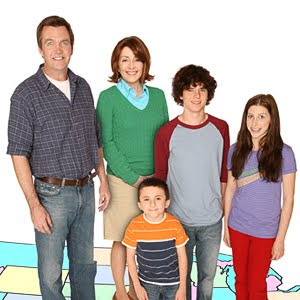 If you're not already a big fan of this new successful sitcom, the Christmas episode will win you over. Mother, Frankie played by Patricia Heaton, wants to sing in the church choir's Christmas program but knows that planning and preparing for the holiday takes too much of her time and energy. But when her husband Mike, played by Neil Flynn, offers to 'take care' of it all so she can rehearse with the choir, she is doubtful of his competence. The real star of this show is the youngest son Brick played by Atticus Shaffer. In this episode, Brick has an existential crisis when he loses his Santa Claus Pez dispenser. This episode is the 2009 holiday episode re-airing as a part of the regular cycle of reruns this summer.

Another summer rerun is the holiday episode of the new comedy Community, airing Thursday July 8th at 10 pm (EST) on NBC. This episode entitled 'Comparative Religion' sees the classmates from this community college at the end of the semester worrying about their Spanish language final exams, a bully and Shirley's Christmas party. But not in that order.

Or, if you are so inclined, a holiday episode of American Chopper is on Thursday morning, July 8th at 11 am (EST) on the Discovery Channel. I'm making a point to highlight this series' Christmas episode because this particular episode 'Make-A-Wish Bike' can be difficult to find on TV schedules. One can always purchase the episode from iTunes or Amazon.com but catching it as it rebroadcasts on the network is tricky. Somehow this episode doesn't pull up easily on internet search engines and online TV schedules. Anyway, this third season special of American Chopper sees Paul Jr. take more of an active role in working on the bike the shop creates for a charity event for Christmas. This is just one of three Christmas installments of the reality series about custom motorcycles and the Orange County Choppers workers.

Did you know Christmas episodes of all sorts air year round on television?--every day in fact. Above are just a few highlights of shows airing this week. Let me know if this is helpful--or if you're looking to watch something in particular. I'll keep an eye out for it.
Posted by Joanna at 12:30 PM