One of the things that I do each Spring (the Christmas off-season) is catch up on a long list of pop culture non-fiction books.  At the top of this list is last year's biography of actor James Garner. 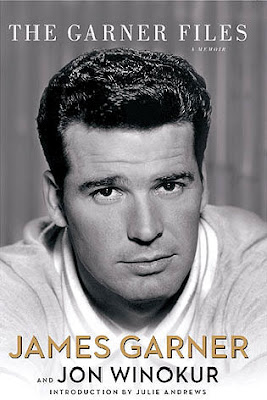 The Garner Files: A Memoir by James Garner and Jon Winokur reflects back on the leading man's personal life and career.  You'll read about Garner's scrappy upbringing in Norman, Oklahoma and his unintentional start in show business.  There are details of his time spent playing the gambler Brett Maverick on the hit TV western Maverick and his iconic private detective Jim Rockford on The Rockford Files--the two TV roles he's most closely associated with.  For more dedicated fans of TV history, you'll love to read Garner's take on the lawsuit he took up against Warner Brothers after Maverick and the one against the network after The Rockford Files.

If you're a fan of Garner like I am, you'll be interested to know that this memoir seems to capture the actor's own voice.  You'll believe him when he discusses his chronic life-long knee problems, his passion for race car driving and golf, and the tenderness of his words when he discusses working with co-star Julie Andrews.


The affection seems to go both ways as Julie Andrews pens a touching introduction to his book.  You may remember that Garner and Andrews shared the screen in the movies The Americanization of Emily in 1964, Victor Victoria in 1982 and again in the TV movie One Special Night in 1999.

Though Garner doesn't reflect in depth on every movie and TV series in his very long career, he does include comments on the projects he himself liked and felt were important to his career and personal life.  If you're like me, you'll hang on his every word as you read about his time spent in the company of Hollywood royalty such as Marlon Brando (with whom he co-starred in the 1957 film Sayonara), Steve McQueen (with whom he worked in 1963's The Great Escape--they were also next door neighbors in Los Angeles), Lauren Bacall (he brought her in on the sixth season of The Rockford Files), and of course, Julie Andrews.


If you've been in my home, you've likely seen my framed autographed photos of James Garner hanging on the wall.  I joined the Official James Garner Fan Club in 1980 when I was still in elementary school.  I've had those photos of my favorite star hanging up since I received them in the mail--in my childhood bedroom, my college dorm rooms and since.  The corners are torn and the photos are losing their tones from sun exposure but I enjoy having them out and seeing them.  They remind me of my favorite TV shows, The Rockford Files and Maverick, and the young girl with a passion for TV and its stars.  Garner's memoir is a must read for all classic TV and film fans.

Do you remember reading my book reviews from last year?  Click the link to check them out again.   Alison Arngrim's Confessions of a Prairie Bitch and Melissa Gilbert's Prairie Tale.  You may remember that both of these biographies were written by actresses from the 1970s TV series Little House on the Prairie.
Posted by Joanna at 12:42 PM