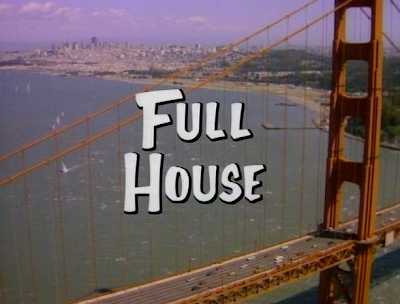 I've been having so much fun reminiscing about Christmas entertainments that include the cast from The Dukes of Hazzard that I thought I'd share one more.  In the 1988 episode "Our Very First Christmas Show" on Full House, actor Sorrell Booke (that's J.D. Boss Hogg to you and me) makes a guest appearance.  Do you remember this second season episode?


The Tanner family is on their way to a family reunion to be celebrated at Christmas in Colorado.  Young Stephanie is the only one who doesn't want to go--she's worried that Santa Claus won't be able to find her away from home, in Colorado.

The family boards an airplane for their western destination.  Much to their surprise, Rebecca Donaldson, Danny's co-host on his morning TV talk show, is also on-board.  She's coincidentally taking the same flight to reach her connection to go home to Nebraska for Christmas.


A severe snowstorm forces the plane to make an unscheduled landing and all the passengers are stuck spending Christmas Eve at the airport until flights resume in the morning. Stephanie is upset, fearing that Santa won’t be able to find her.  Danny is frustrated because the airline has lost his baggage--which includes the girls' gifts.  Jesse feels pressured by his parents to romance Becky--who has made it clear to him that she intends to stay friends (we'll see about that!)  And, the other stranded passengers are also upset about spending their holiday away from loved ones.  The mood in the terminal is quite low.

Finally, Jesse inspires everyone to celebrate the spirit of the season despite their surroundings.  Reminding everyone that Christmas is about family, love, and togetherness--Jesse points out that everyone has all they need right here in order to feel the holiday spirit.

The Tanner family learns that they can have a merry Christmas any place as long as they are together.  But one question remains:  who was Lionel-- the stranger with the bad toupée?  He may have dressed as Santa Claus and helped restore Stephanie's belief in the magic of the season--but he's disappeared from the snowed-in airport.  Joey's Santa suit is still in its bag and Danny's luggage with the gifts has been found.  Just who was that magic man?


Remember this fun episode?  Sure enough, that's actor Sorrell Booke playing Lionel.  Here, he's able to get away from playing the Scrooge-like Boss Hogg for a little while.  It's nice to see him play a pleasant role--even if it is just once.  There are four other Christmas episodes and one New Year's episode on Full House--which one is your favorite?