The 2013 National Christmas Tree Lighting is taking place on Friday Dec. 6th this year.  The annual outdoor ceremony and musical concert are presented by the National Park Service and the National Park Foundation and are broadcast from President’s Park in Washington, D.C.  The President and his family attend and push the button that illuminates the grand, outdoor National Tree near the White House.

This year's celebrity musical guests include Train, Janelle Monáe, Arturo Sandoval, Prince Royce, and other artists.  Check out the website's list of performers.  This outdoor ceremony and musical concert are broadcast on TV on PBS each year.  Check your local PBS listings for when the TV special will air throughout the month of December.  For more information, please check out the website http://thenationaltree.org/  Here, you can also see video of the 2012 ceremony.
You can also follow the @TheNationalTree on Twitter.


The annual Christmas music concert known as Christmas in Washington airs this year on Dec. 20th at 8pm(ET) on TNT.   It is a prime time TV special that takes place in Washington DC's National Building Museum for a very special live audience which includes the President and his family.  This year's event is hosted by Hugh Jackman and includes musical guests Pat Monhan (from Train), Janelle Monáe, Anna Kendrick, Sheryl Crow, and Backstreet Boys.  This year will also include special guest Charles Barkley.
For more information, please check out the website at TNT. 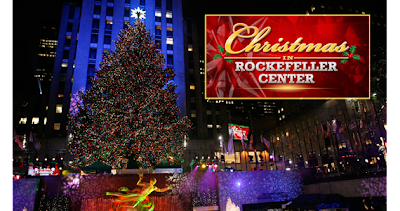 Don't forget about Christmas in Rockefeller Center, the annual music concert that proceeds the lighting of the tree in Rockefeller Center.  This year's TV special is airing on Wednesday, Dec. 4th, 8pm(ET) on NBC.  The outdoor live concert is usually pretty exciting to watch as the performers have to deal with whatever surprises the weather and the crowds bring!  This year the event will be hosted by Al Roker and Savannah Guthrie and the special guests include Mary J. Blige, Toni Braxton, Mariah Carey, Kelly Clarkson, Kenny "Babyface" Edmonds, Goo Goo Dolls, Ariana Grande, and Jewel.  Check out the website at NBC for more information.


And of course, the official start of the holiday season occurs when Santa Claus arrives at the end of the Macy's Thanksgiving Day Parade.  Though the annual New York City parade airs on several TV networks, I prefer to watch the NBC coverage.  This year's parade TV coverage begins at 9am(ET) on Thursday, Nov. 28th.  For more information from the NBC website, check out this link.

What other annual Christmas TV specials do you look forward to watching?  I usually watch the annual concert of the Mormon Tabernacle Choir which airs on PBS each year.  This year's event includes Tony-winner Alfie Boe and news anchor Tom Brokaw.  Check your local PBS listings for broadcast times this December.
Posted by Joanna at 10:28 AM